We Chat With the Owner of Atchoum the Celebrity Cat

Atchoum is the first French-Canadian celebrity cat. The exotic Persian, who looks like a long-lost relative of the late Colonel Meow, hails from a suburb north of Montreal. It’s no small thrill he’s a fellow Canadian — and from my hometown, no less. Atchoum’s French Canadian owner, Nathalie C├┤t├®, who speaks with a charming French accent, is still processing the sudden fame. She began posting photos of Atchoum in January on Facebook and Instagram, and the cat with intense golden eyes and wild fur went viral.

What makes Atchoum look like a mad scientist on a bad hair day is a condition called hypertrichosis. The rare congenital hormonal condition causes excessive hair growth in humans, and this is the first documented case in a feline. There is no cure, but apart from the excess furriness, Atchoum is a happy, normal, and lucky kitten who turns one in May. Having a pet parent who is a groomer is a bonus.

We were delighted to speak with Nathalie C├┤t├® in her first English-language interview.

Layla Morgan Wilde for Catster: Atchoum is French for “Sneezy,” as in one of the Seven Dwarfs. Who chose the name and why?

Nathalie C├┤t├®: Well, I chose the name because when you sneeze hard it messes up hair, like Atchoum’s.

When and where did you adopt him from? Did you always like Persian cats?

I’m a cat lover of all kinds, and when I saw Atchoum he looked like the others, but I just felt for him. I adopted Atchoum around end of June 2014, at about six weeks old. It’s a gift I got.

Do you have other pets? Children?

Yes, I have three other cats and two children.

You work as a groomer at a vet clinic. Was that a factor in adopting a cat who requires lots of grooming?

No, but it really helps to make Atchoum look good!

When did you notice a change in Atchoum’s appearance and get a diagnosis from your vet?

The first week I got him, I noticed a little mustache around his nose, and all other symptoms confirmed his condition. Unfortunately, there is no genetic test that can be done here.

How often do you groom him, and how is it different from grooming other long-haired cats?

I’m cleaning and grooming his eyes and nose two times a day, and I brush him twice a week.

How do you feel that your furry family member is getting famous? Your friends and family? Is he acting any different?

My friends and family don’t act differently. The children are happy with Atchoum’s popularity and help a lot taking photos or videos. Atchoum changed our lives in a sense. We are so busy!

Atchoum is still a kitten but looks large for his age. How much does he weigh?

He weighs eight pounds, but one pound of that is hair.

He looks intense, but appearances can be deceiving. What’s his personality? Is he a one-person cat or does he love all?

He plays a lot with us and other cats. He’s very affectionate, and he wakes us early in the morning to answer Atchoum’s fans.

What are his favorite games, toys, treats, places to sleep?

Cat Playground on iPad is definitely his favorite game.

Would he be comfortable being on TV or making public appearances?

We don’t know yet. We’ve never taken Atchoum out in a studio.

What is your ultimate dream for Atchoum?

He always taking our iPad to play. He dreams having his own iPad.

So, Catster readers, what do you think about Atchoum? Have you lived with a cat with such an extreme expression? Tell us in the comments!

All images copyright Atchoumfan and used by permission.

About the author: Layla Morgan Wilde is a holistic cat behaviorist, an award-winning writer/photographer and founder of the premier online magazine Cat Wisdom 101. A passionate advocate for cats, she founded the Toronto-based Annex Cat Rescue in 1997. In addition to her blogging at Cat Wisdom 101, she blogs at Boomer Muse and contributes to Petfinder.com and Nordic Spotlight. Wilde is a professional member of the Cat Writers’ Association. She lives in Westchester County, NY, with four cats. 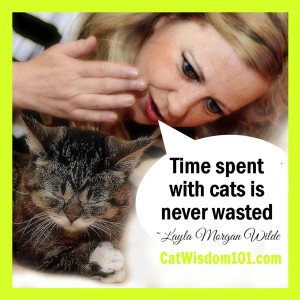