Next on The Scoop: Wine for Your Cat — We’re Serious (and It’s Not Alcohol)
Catster Tips

Catster Quiz: Is Your Cat a Scaredy Cat?

Cats are known to be a bit skittish; take this quiz to learn the level of fraidy that inhabits yours.

Cats have the reputation for being a little less than stable when it comes to composure, but for some, fear and anxiety can indicate serious health problems. Take this quiz, and see if your cat is suspiciously scared or completely collected. (This quiz is usually mostly humorous; this time it’s mostly serious.)

1. A couple of new friends stop by for cocktails and cat videos. How does your kitty react? 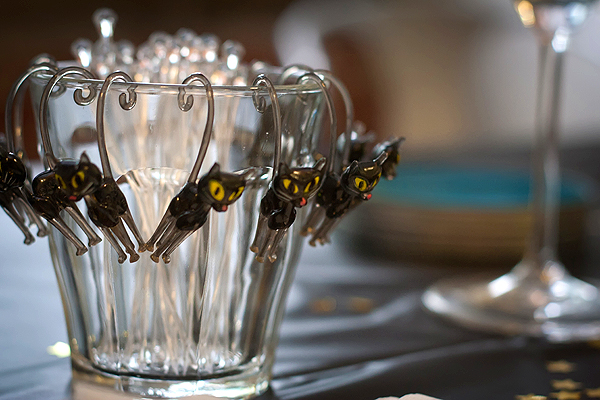 a. He hides under the bed, shaking, refusing to join the party.

b. He dashes into another room but curiously peeks at the activity.

c. He ducks around the corner for several minutes but then emerges and becomes social.

d. He greets your guests, hoping they brought cat treats.

2. The tumbleweeds of cat hair have gotten out of hand, and it’s time to vacuum. You flip the “on” switch and watch your cat do what? 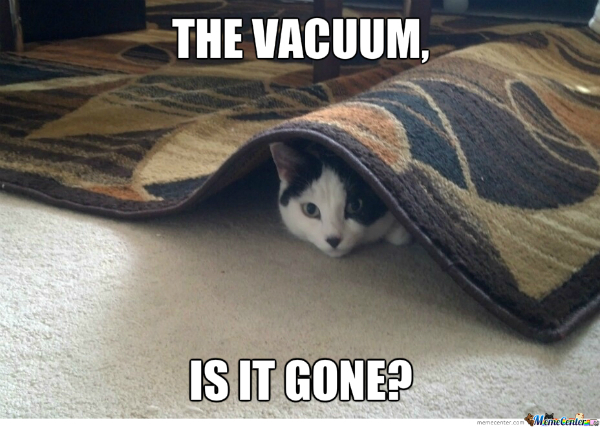 a. Blaze a trail into the next room and remain there for several hours

b. Hightail it down the hall but return when the beast is safely out of sight

c. Continue loafing in the middle of the floor and only race away when the vacuum monster is headed in his direction

d. Refuse to move and, even after moving, continue to remain in the way of your cleaning efforts

3. A mysterious loud noise comes from a room in your home. Your cat:

a. Hunches down and looks for a place to hide

b. Looks completely alarmed and remains unsettled for several minutes

c. Jumps a bit, looks toward the sound’s origin, and then goes about his business

4. Thunderstorm! Loud claps of thunder affect your kitty in what way? 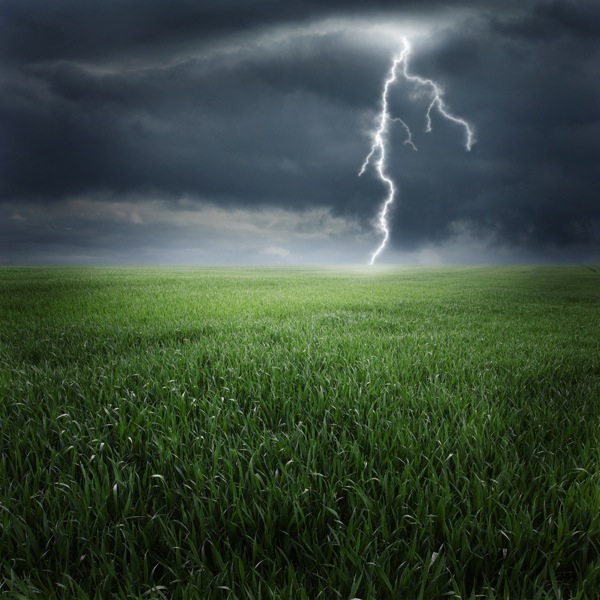 a. He becomes anxious, pacing and vocalizing.

b. He hides until the storm passes and then joins you.

c. He accepts your attention and eventually calms down.

d. He sits in the window watching the whole thing go down while you pull a blanket over your head.

5. Two of your cats bully the new cat, even after careful socialization. How does she respond?

a. With general anxiety accompanied by inappropriate urination

b. She becomes a loner and actively avoids the other cats

c. She gets in a few good swats and then retreats

d. She ignores the bullies and does her own thing, with or without the other cats in her space. That’s good advice for humans, by the way!

6. It’s Halloween, and a parade of trick-or-treaters rings your doorbell. Is this a scary trick or a treat for your cat?

a. Scary! Kitty disappears to an undisclosed hideaway until the next day when he cautiously returns with signs of compulsive grooming.

b. Sorta scary. He retreats to a stack of towels in the linen closet until he hears you open a can of food at the end of the night.

c. Not too scary. You’ve placed kitty in a closed room with his favorite comfort items.

d. Total treat! In fact, he wants to know where his giant bag of treats is!

7. How does your cat behave when you take off for a grocery run, leaving him alone?

a. He vocalizes and, if you’re
gone for more than a few hours, may show signs of constipation in the coming hours or days.

b. He meows for a few minutes after you’ve left (the neighbors made sure you knew that) but then stopped.

c. He curiously watches you get ready, then naps while you’re gone.

d. He can’t wait for you to go so he can cruise the counter — maybe there’s a fresh stick of butter up there. 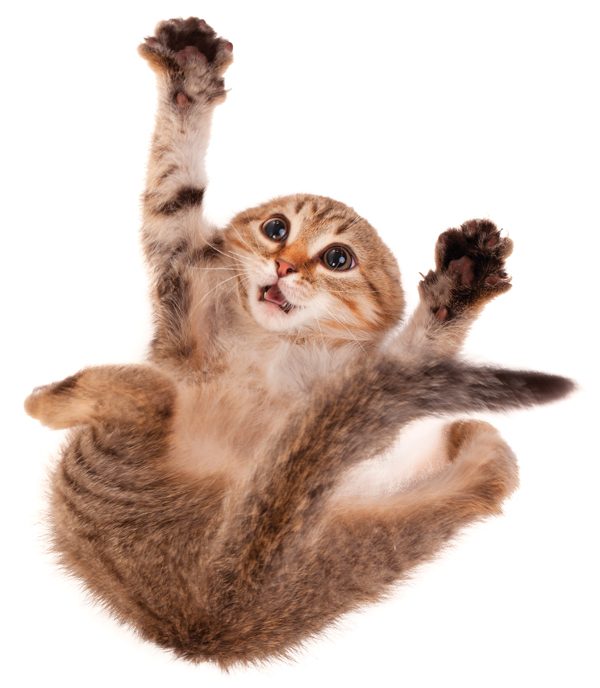 Considerable fear and anxiety can be indicators of serious health or behavioral issues. Inappropriate urination or defecation, compulsive grooming, hiding more than usual, shaking, hunching down, or aggression may be signs that your kitty needs to get to the vet — pronto. 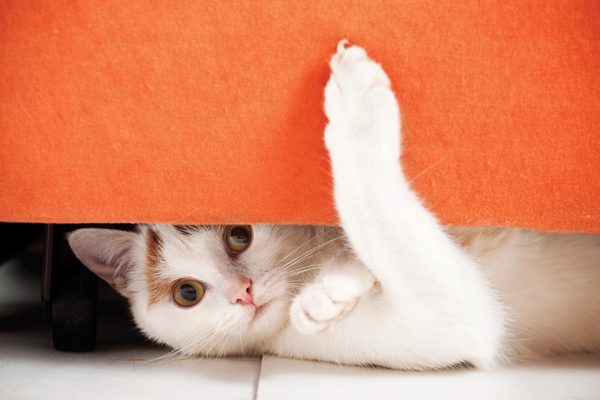 Some cats are naturally more cautious and anxious than others. You can sometimes prevent triggers with preparation. For example, if you’re having a big dinner party, give kitty a comfortable and safe place behind a closed door to hang out for the night. Teach visitors how to best approach your cat, and don’t make him come out of hiding if he feels better in a concealed location. Some cats respond well to cat-safe holistic calming formulas, while others might need a prescription medication. Discuss all options with your vet. 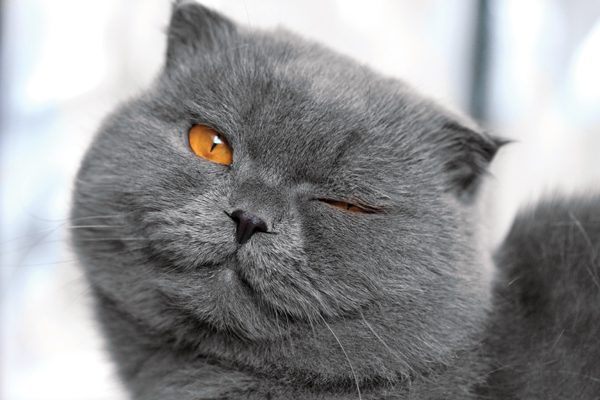 Your cat is pretty average when it comes to handling anxiety and fear. Sure, she might be startled by a knock at the door or the clanging of pots and pans, but she recovers fairly easily. If she does have occasional triggers, refer to the guidance outlined in the Mostly Bs section.

Your cat’s totally chill. He loves people and activity and doesn’t have any trouble sleeping alongside a running hair dryer. Even though your kitty’s calm and collected, don’t ever try to scare him or test his chill — like those people in the “cats and cucumber videos,” for example. Those people are not not cool.

About the Author: Angie Bailey is an eternal optimist with an adoration of all things silly. Loves pre-adolescent boy humor, puns, making up parody songs, thinking about cats doing people things and The Smiths. Writes Catladyland, a cat humor blog, Texts from Mittens (originated right here on Catster) and authored whiskerslist: the kitty classifieds, a silly book about cats wheeling and dealing online. Partner in a production company and writes and acts in comedy web series that features sketches and mockumentaries. Mother to two humans and three cats, all of which want her to make them food.