Next on The Scoop: Cats and Their Obsessions: The Window Seat
Ask a Vet

Ask a Vet: What Can Cause Severe Anemia in Cats?

The condition can have tragic results; at least one cause is simple -- and easily preventable.

I recently treated an extremely unfortunate cat. He was a four-year-old neutered male Domestic Shorthair who lived indoors. The owners rushed him to my office after he collapsed at home. They believed he had been fine up until that day, although they had noted that he seemed dirtier than usual for several weeks leading up to the crisis. He did not receive a flea preventative because the owners believed (mistakenly) that indoor cats cannot become infested with fleas.

The poor cat was in very bad shape. He was breathing with increased effort. He was laterally recumbent — meaning he lay on his side, unable to rise from that position. Lateral recumbency is a sign of profound illness in a cat. His gums, which normally should be pink, were pale and yellow. His eyes and ears also had a yellow tinge. He was underweight. His coat was rough, implying that he hadn’t had the energy to groom himself for at least a few days. There were small black specks of material throughout his coat.

Pale gums can be caused by anemia or shock. Yellow gums, eyes, and ears are caused by icterus, also known as jaundice. And the dark specks of material throughout his coat, which the owners thought was dirt, was in fact flea feces.

Cat and flea shadow by Shutterstock

The cat clearly had been sick for a while. Why had he seemed normal for so long, and then suddenly collapsed? Cats’ bodies tend to accommodate illness. As a cat becomes sick, his body adapts and he initially shows no symptoms. Cats also instinctively hide illness. Therefore, subtle symptoms such as poor grooming and slow weight loss might not be immediately evident even to observant owners. In this case, the cat managed to hold it together until his illness overwhelmed him and he collapsed.

We started oxygen therapy to help with the cat’s breathing. We drew a blood sample for diagnostic testing. The blood was very thin. We mixed one drop of blood with one drop of isotonic saline on a microscope slide and swirled the mixture around. The blood was noted to collect into clumps, which is abnormal.

The simple swirling test is known as a slide agglutination test. The clumping was a positive result, and it meant that blood cells were sticking together in an abnormal fashion. This happens when a cat’s immune system attacks its own blood cells.

In this case, I had a strong suspicion of the cause. It was the fleas. Or, rather, it was an organism spread by fleas. I suspected that my patient had a condition called, colloquially, feline infectious anemia. 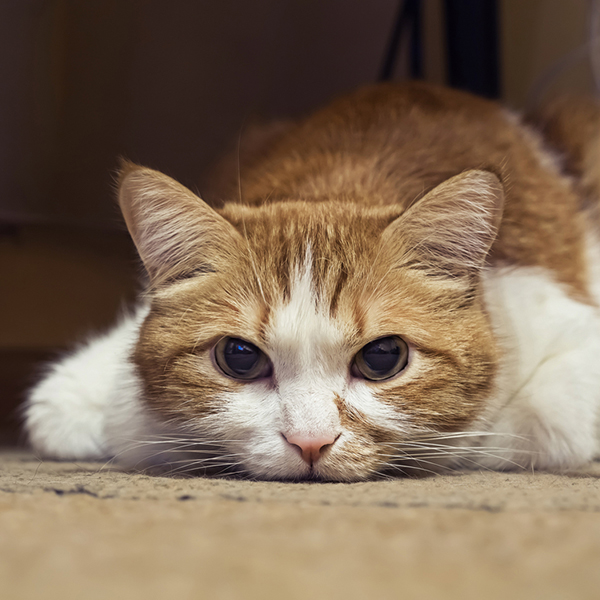 Orange and white cat by Shutterstock

The more formal name for the condition I suspected is feline hemotrophic mycoplasmosis. It is caused by bacteria in the genus Mycoplasma. The bacteria act as blood parasites. They live on the membranes of red blood cells, which transport oxgen cells throughout the body. The bacteria trigger an immune response in the cat’s body. The cat’s immune system dispatches antibodies that attach to the bacteria — and the red blood cells with which they are associated. The antibodies then act as a signal to other parts of the immune system to destroy the bacteria and, unfortunately, also the red blood cells to which they are attached. In severe cases, the products released by the destroyed blood cells cause the blood — and hence the gums, eyes, and ears — to turn yellow.

Treatment for hemotrophic mycoplasmosis consists of antibiotics to kill the bacteria and steroids to fight the immune system’s attack on the blood cells. Severe cases require blood transfusions. Flea control, of course, also is necessary.

Hemotrophic mycoplasmosis actually is quite common in cats. Many cats are able to suppress the infection to a level that does not lead to illness. My patient, however, was not one of those cats. The infection and his immune system were overwhelming him.

A complete blood count showed profound anemia. Under normal circumstances, cat blood should consist of 30 percent to 45 percent cells and 55 percent to 70 percent fluid. My patient’s blood consisted of only 6 percent cells. He was struggling to breathe because he lacked the cells that carried oxygen in the body. 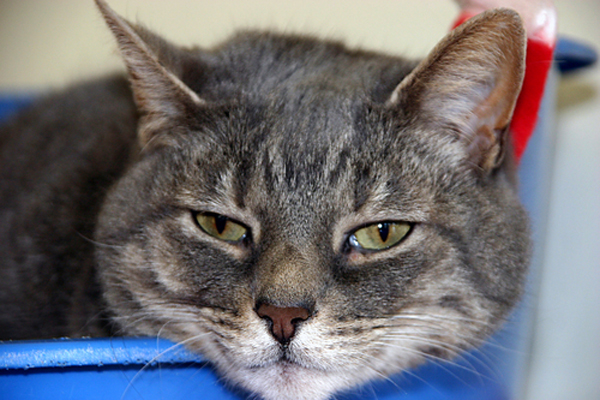 A microscopic review of a blood smear essentially confirmed the diagnosis. There were many juvenile red blood cells, which showed that his body was trying to correct the anemia. But more important, many cells were noted to have small dots attached to them — those dots were probably hemotrophic Mycoplasmas. I say probably because a definitive diagnosis of feline hemotrophic mycoplasmosis can be reached only by running a DNA test. Sadly, such a test would not happen for my patient.

My patient needed a blood transfusion. An intravenous catheter had been placed upon his arrival, and the owners approved the transfusion. Unfortunately, he never received it. As we were preparing the transfusion the cat began to breathe in an irregular fashion. He had exaggerated jaw movements with many of his breaths, a condition called pre-agonal breathing. His body was exhausted, and it was putting up its last efforts. The pre-agonal breathing soon progressed to full agonal breathing, which is a reflexive type of breathing that occurs immediately before (and sometimes after) death.

There was nothing that could be done. The cat didn’t make it. The owners were devastated.

There was much about the situation that was sad. For me, one poignant matter was that the entire illness was preventable. If the cat had received regular flea preventatives he would not have gotten sick. Feline infectious anemia is yet another reason why I recommend good flea preventatives in all cats, regardless of whether they go outside.