Next on The Scoop: Watch Adorable, Adoptable Cats and Dogs in Macy’s San Francisco Windows
Humor

6 Ways My Cats Reacted to My Artificial Christmas Tree

My cats and I have an artificial tree this year, and it doesn't seem like they mind the change.

I’m 46 years old and have never — not once — had an artificial Christmas tree in my home. We always had the real deal growing up and, as an adult, I continued the tradition with my own little family. This year I live in an apartment and decided to go the artificial tree route because it’d just be easier. Even though my heart wasn’t 100 percent into it, my boyfriend and I went in on a nice artificial number and, even though it lives at my place, we have shared custody. I love Christmas and hoped the lack of a fresh tree wouldn’t take away from my holiday cheer. 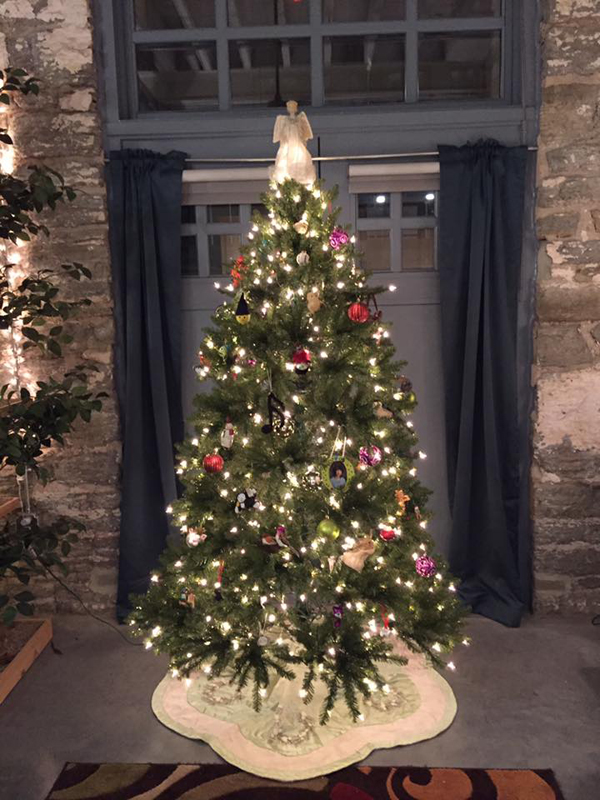 Instead of hauling the tree from a farm, we pulled it out of a box last weekend. Then we trimmed it with some old and new decorations while listening to holiday music. I had to admit it looked amazingly realistic. I was pleased with our purchase.

I was curious how the cats would react to the fake tree. Like me, they’d always lived with a real one, and I came to expect certain behaviors from them once the fir was in place. They’re cats, and they should like trees, real or artificial, right? Or maybe they could tell the difference. I wasn’t sure, but would soon find out. 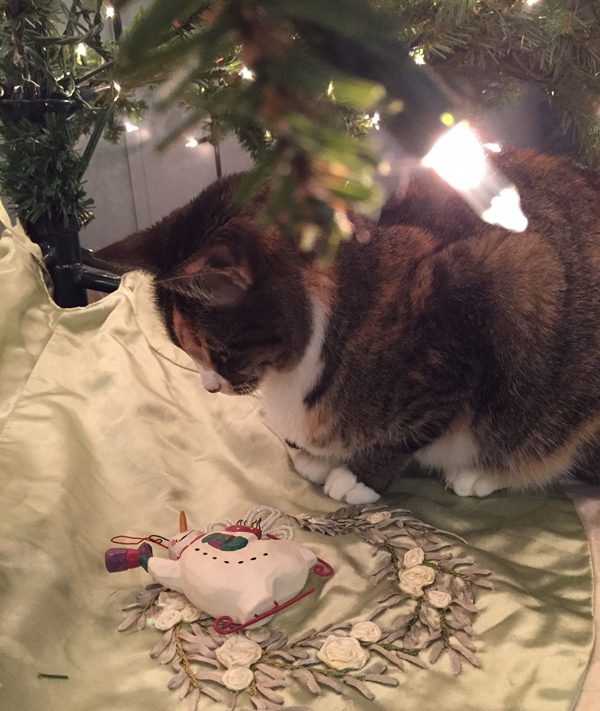 The tree’s branches may not be real, but the ornaments that dangle from them certainly are. That means they can still be swatted and knocked to the floor. Phoebe is my busy one, so she got right to the ornament-batting — didn’t even skip a beat. 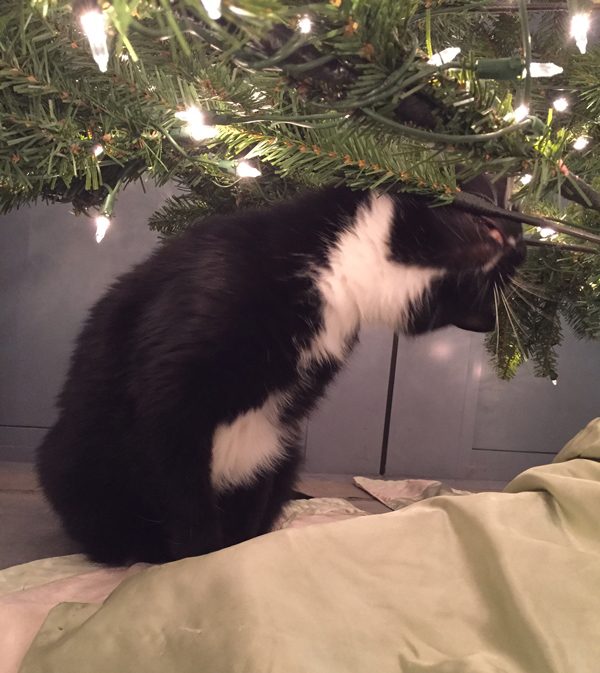 Cosmo’s a chewer and, in past years, I’d caught him gnawing on our tree’s branches. He didn’t seem to eat anything — he just liked rubbing his face all over the branches and gently chewing. Turns out he doesn’t give a rip if the fir is for realsies or not — he got his face in the game. 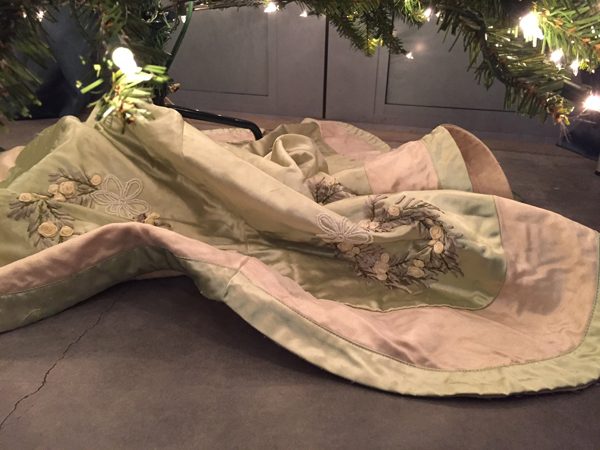 My cats skirt the issue.

One of my kitties’ favorite holiday games is “let’s chase one another around the tree, and completely crumple the skirt.” Good times, right? In past years, I’d sometimes find the skirt halfway across the room. I wish I’d had a surveillance camera to watch them move the thing. I like to imagine them rolling around inside the skirt like something you’d see in a cartoon. Phoebe has also been known to burrow under the skirt and nap. Until the tree’s base was surrounded by presents, we would often find a little Phoebe-shape lump in the skirt.

So far, the cats are still all about the chase. I’ve had to straighten the skirt on several occasions. In fact, the concrete floor gives the skirt even more sliding action, providing an even bigger thrill for the feline playas. And the cold, hard floor hasn’t been a deterrent to Phoebe’s undercover napping. She’s a giant lump beneath the tree even as I type this. 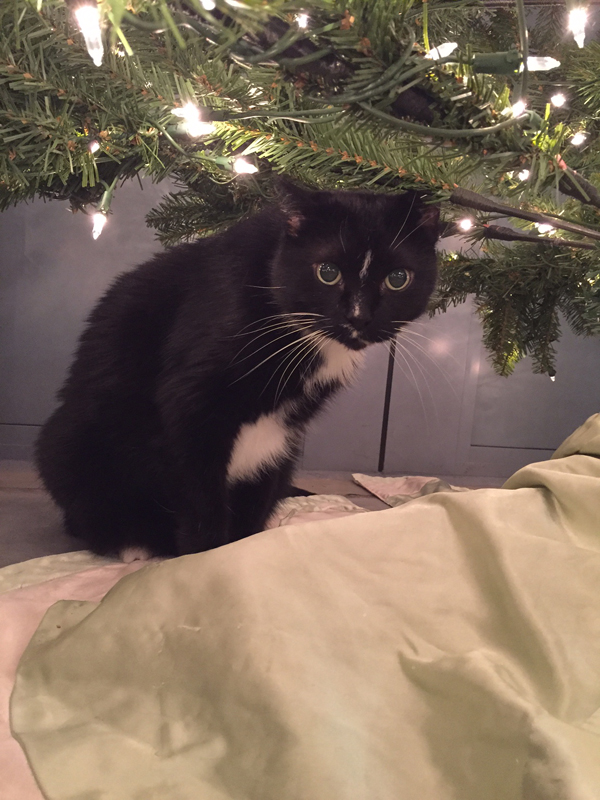 “There used to be water here. Am I wrong?”

Every year we tried our hardest to prevent our cats from drinking the water from the Christmas tree stand. It’s not good for them, and we developed lots of methods for keeping it inaccessible to their lapping tongues. I noticed Cosmo sniffing around the base of this year’s tree. I’m fairly certain he doesn’t remember the tree water from years past, but maybe he does. The bottom line is that I no longer have to be the Christmas Tree water-in-the-stand police. 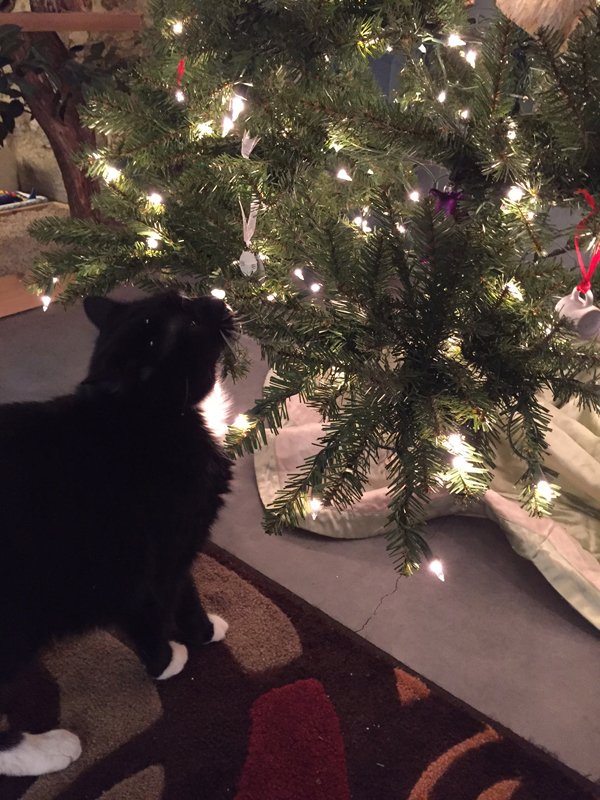 I’ll admit it: I miss the smell of a real tree. It’s one of my favorite parts of having a live fir in the house. I know I could buy scented doo-hickies to make the tree smell fresh, but I don’t trust them. It’s either authentic or it’s not.

Cats have a keen sense of smell, and Cosmo spent quite a bit of time examining the tree with his nose. I wonder whether he misses the smell like I do.

Lastly, my cats love sleeping underneath the Christmas tree. I suppose it’s an instinctual thing, and even though the tree didn’t come from the great outdoors, it’s still a tree, and that’s good enough for them.

How does your cat react to your Christmas tree? Tell us in the comments!