A cat road trip would have to include a 10-ton ball of twine, a four-story dresser with an open drawer, or a house shaped like a big stinky shoe.

Summer is the perfect time to pack up the car and engage in an action-packed road trip. I prefer car over air travel. I like to stop often and explore local attractions — the weirder and cheesier the better. I especially enjoy roadside fiberglass animals. Extra points for dinosaurs.

Let’s pretend for a moment that cats enjoy car travel. In fact, they’re completely jazzed by it because they can visit some pretty cool tourist attractions that are of particular interest to kitties. Are you with me? Do you have your “pretending hat” on? Okay, let’s go for it! Here are five tourist attractions cats want to visit on their great road trip vacations. 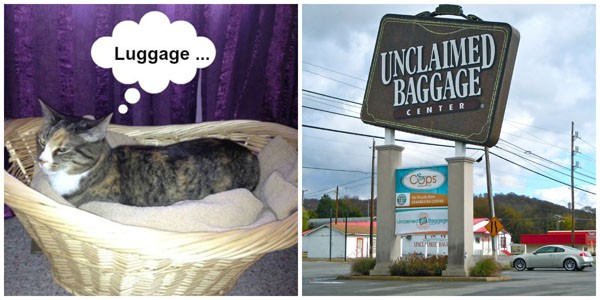 After a three-month process of attempting to trace bags left at airport carousels, the 0.5 percent of orphaned bags make their way to the Unclaimed Baggage Center in Scottsboro, Alabama, where the bags and their contents are cleaned and sold to the public. Since the center opened in 1970, it has become one of the biggest tourist attractions in Alabama.

This place has “cat” written all over it. Not only are there oodles of bags in which to lounge, the massive amount of clothing is just asking for multiple layers on cat hair. 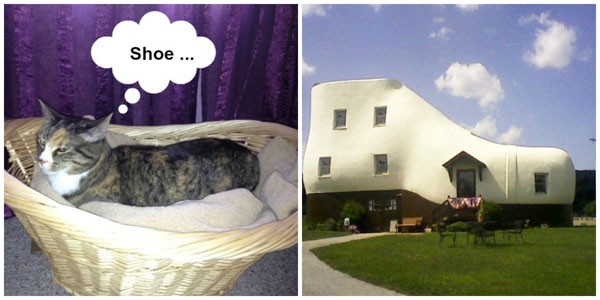 “I can smell it from here.” Photo via Wikipedia

This boot-shaped house was built in 1948 as a method of advertisement. It’s 25 feet tall and includes five stories. At one time it was available as a rental, but now it’s open for tours. How cool is that?

Cats have an obsession with shoes, especially stinky ones. We can’t vouch for the smell of this place, but anything shoe-related would have a cat screeching to a stop on the side of the highway in no time flat. Shoe … flat … get it? 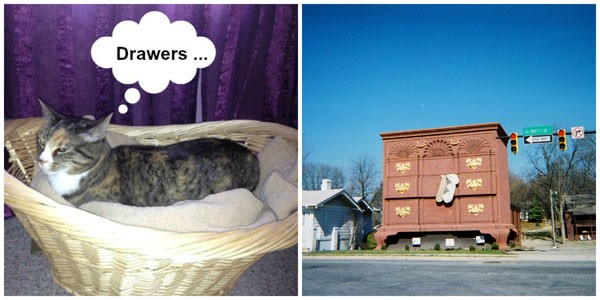 “I need this in my life.” Photo via Wikipedia

High Point, North Carolina, claims the unusual title of “Home Furnishings Capital of the World.” Did you know that? I didn’t, but now I have a little bit of impressive trivia in my back pocket. The giant piece of furniture stands 38 feet tall, and two socks hang from one of the massive drawers.

Have you ever known a cat who’ll walk past an open drawer without attempting to climb inside? Me neither. A kitty’s eyes would nearly pop with excitement at the sight of a giant open dresser drawer. And the dangly socks! Come on! Cats everywhere are online looking for the quickest route to High Point. 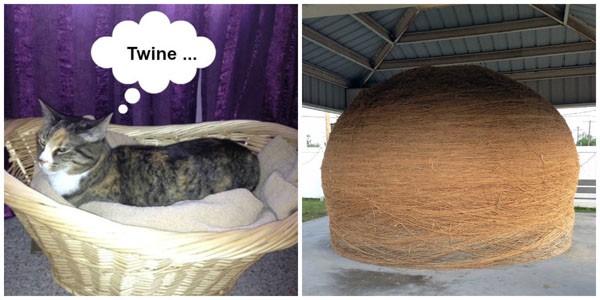 Several places lay claim to having the largest ball of twine, including one located in my home state of Minnesota. Distinct about the one in Kansas is that the Sisal twine ball was created by the community and is constantly growing. Right now it weighs more than 20,000 pounds — which is 10 tons. I’ll write that again: 10 tons.

Cats would come together for pilgrimages to this most holy site for felines. Although humans know it’s not safe for cats to play with twine, there’s still an instinctual need to connect to balls of string, yarn, and twine. Once gathered at the ball, cats would spend hours napping, absorbing the energy of the sacred Sisal ball. 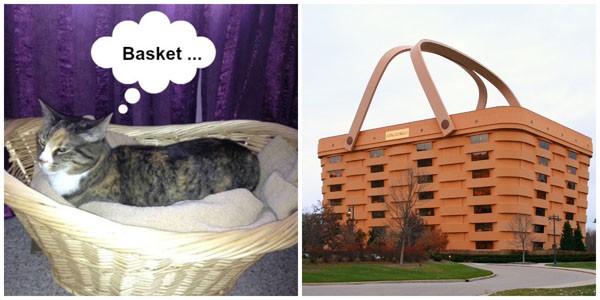 “So much basket, so little time.” Photo via Wikipedia

The Longaberger Co. is a manufacturer and distributor of handcrafted baskets and other home decor items. It’s known for its baskets, and company officials don’t hide their pride. The headquarters are tucked inside a seven-story, 180,000-square-foot, basket-shaped building that’s modeled after the company’s bestseller, “Medium Market Basket.”

Cats know the value of a nice basket. They’ve spent hours napping inside them, and the chance to visit the Queen Mother of basketry would top the bucket list of every cat in the country. The company would have to organize feline tours to create order among the throngs of cats aimlessly wandering the halls of the building, looking for the perfect nap spot.

What tourist attractions do you think cats would enjoy? Tell us in the comments!