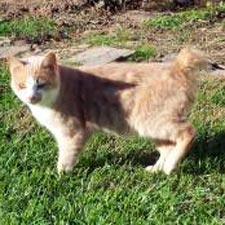 The Look of a Manx

Sturdy in stature, the Manx sports one of the shortest torsos of any feline breed. Its looks are highlighted by a broad chest, round head, and big, round eyes. The ears are wide set and the neck is short and thick. The tailless gene is dominant in both the shorthaired and longhaired versions, but some Manx kittens can be born with a short – or a full – tail. It depends on the parents. If the egg and sperm both carry the marker for no tail, then the kittens will never develop tails.

The shorthaired coat is thick with outer guard hairs that give off a glossy look. The longhaired coat feels silky to the touch. The coat is available in nearly every color and pattern, with the more popular looks being color pointed, bicolor, solid and tabby.

Females weigh between 8 and 10 pounds and males average between 10-12 pounds.

Calm and composed, a Manx tends to bond closely with one person or the entire family. Not a good choice for highly mobile people as this breed does not like being relocated to different homes. But be aware that this is a speedster who is capable of making hairpin turns during play. Look up if you can’t find your Manx – this breed likes to supervise household activities from top shelves or on top of doors.

The Manx usually won’t turn down an invitation to play fetch with you.
This breed tends to shadow favorite people in every room of the house.
It is considered a hardy breed, not subject to many genetic health conditions.
Shorthaired types require very little grooming care, but the longhaired ones do benefit by being brushed two or three times a week.

This cat’s mysterious beginnings are anything but boring. One popular myth is that the Manx was late getting onto Noah’s ark and Noah accidentally slammed the door on its tail. Another popular folklore speaks of Manx cats swimming ashore from the wrecked galleon of the Spanish Armada in 1588. But the more commonly accepted theory is that this breed originated on the Isle of Man, located off the coast of England, several hundred years ago.

Ranked as one of the world’s oldest breeds, the Manx has been competing for show honors in the Cat Fanciers Association since the 1920s. However, despite achieving popularity in Great Britain since the 1870s, the Manx is not recognized by British cat show officials.