Next on The Scoop: The DiPaolo Cats: Spreading Awareness for Pets with Special Needs
Behavior 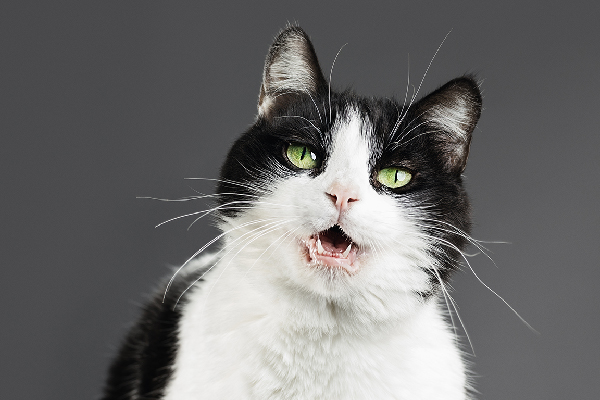 Why Is Your Cat Whining?

Is cat whining just an attention-seeking cat behavior … or is your cat trying to tell you something more? Let's look into the meaning behind this cat sound.

At three o’clock in the morning, when you’re meant to be benefitting from the deepest part of your night’s sleep, there are few more annoying sounds than hearing your cat whining. And whining … and whining. But beyond the inconvenience of getting woken up by a bout of cat whining, what exactly causes your feline to express herself with this strange cat sound? And when is cat whining a cause for concern?

Cat whining is different from normal, everyday meowing due to the way a feline pronounces her cat vowels. According to Mieshelle Nagelschneider, a cat behaviorist from the Cat Behavior Clinic and author of The Cat Whisperer, there are two cat vowels involved in the meow vocalization.

“When a cat is tense or stressed or perhaps in a weakened state, the meow can become lengthened, vowels become flattened, and also become higher pitched,” she says. “This sounds more like a whine than the two syllables of me-ow.”

Why Is Your Cat Whining?

Now that we’ve pinpointed the sound of cat whining, what causes cat whining? As you might have guessed, hunger might cause cat whining. This could be learned behavior from your cat’s kitten days, when he would meow to let his mother cat know he’s hungry. Or, as Mieshelle says, “Not being fed on time, frequently enough or too few calories can also cause this kind of vocalization.” This could explain late-night or early-morning whining when kitties decide what they really need right this second is a post-midnight snack.

A key part of the motivation behind cat whining can also come from the cat feeling stressed, frustrated or even ignored. Mieshelle throws up the example of a cat seeing a bird frolicking outside of a window and not being able to chase it. “This frustration could cause a cat to vocalize intensely and have a flat and drawn-out meow that could sound more like a whine,” she explains.

Another common prompt for cat whining is an owner leaving the home. In this case, the whining tells you that your cat would prefer that his beloved human stay home and lavish him with attention. Or treats. (Sometimes, it’s truly about the treats.)

Is Cat Whining a Cause for Concern?

Is cat whining a reason to worry? Photography © Seregraff | iStock / Getty Images Plus.

“Most often, cats will meow or yowl in urgent repetition over a long period of time to elicit a response from the owner or because they are stressed,” says Mieshelle, when asked if cat whining is a symptom of a more serious issue. She adds that when a cat doesn’t feel well and is in a “weakened state,” whining might be a way of communicating this pain or distress to a guardian.

If it seems like your cat is experiencing health issues, take her to a vet without delay. As Mieshelle puts it, “All loving cat owners want their cats to be happy and should be concerned as to why their cat is vocalizing in this way.”

What Should You Do About Cat Whining?

How should you handle cat whining? Photography ©SensorSpot | iStock / Getty Images Plus.

Beyond any medical problems, the root of all that cat whining might be a behavioral issue — like a feline who wakes you up in the middle of the night or first thing in the morning with a repertoire of whines and yowls. In these cases, Mieshelle says it’s “best to figure out why the behavior is happening and then make changes to eliminate those reasons.”

Oftentimes, your own behavior — or reactions — might even contribute to the cat whining in question. As Mieshelle points out, “Sometimes, the only reason a cat continues with intense or lengthy vocalizations is because the owner has been reinforcing it.” So, perhaps take a look at your own behavior next time you’re cursing your cat for waking you up in the early hours of the morning with all that whining!

13 comments on “Why Is Your Cat Whining?”