Next on The Scoop: A Safe Place for Domestic Violence Survivors and Their Pets
Behavior 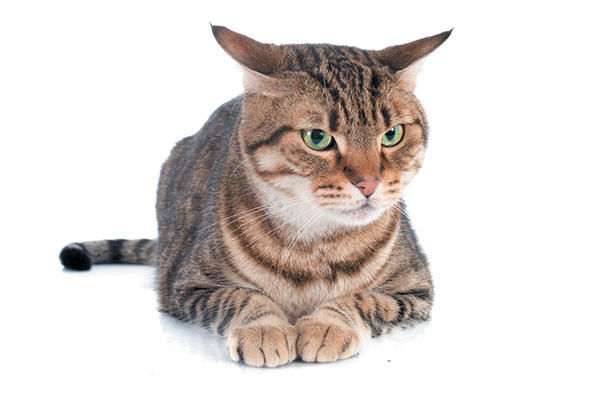 My 19 cats and I recently moved from a large apartment into a home that has twice the living space. Yes, that’s right: 19 cats — I also do rescue work. Aside from how hard it is to move in general, moving with cats adds a whole new layer of complexity, for both human and feline.

Moving from a smaller space into a much larger one caused some of my cats to become quite disoriented and anxious at first, although now they love all the extra space. How did I know they were feeling upset? All I had to do was look at their body language, and my cats told me exactly how they were feeling, every step of the way.

Cat ears say a lot, but they only tell part of the story. An alert, healthy cat will have his ears straight up, taking in his surroundings, perhaps napping in the sun and relaxing. Unless we combine his ear position with tail and body posture as well as pupil dilation, we won’t know for sure if his ears are straight and relaxed, or straight and listening intently for something that’s grabbed his attention.

Moving his ears toward the side of his head — if you call his name or he hears a loud noise, for example — means that something got his attention or the noise bothered his sensitive ears. Ears flat against his head signal fear, anxiety or someone who is looking to start a fight. It’s probably not wise to touch a cat while his ears are flat, as he may bite out of fear or aggression.
I saw a lot of flat ears as we were in transit during our move. Once we arrived at the new house they stayed flat for a while. It took some of my cats longer to get back to “ears up,” but they’re all there now.

Along with the ears, take a look at your cat’s tail position.
The tail tells a lot about your cat’s mood. You’ll see pretty quickly when NOT to touch your cat, as well as when he is apt to be most receptive to attention.

If his tail is straight up like an exclamation point, it generally means he is happy and content, without a care in the world. And if that tail turns into a question mark, your cat is especially happy to see you and might be very receptive to petting and playtime. If you have two cats who are extremely bonded, you may see one put his tail around the other in a protective, loving embrace. In fact, my cats will put their tails around my legs sometimes as they walk along beside me — especially at mealtime as they escort me into the kitchen!

Cat with tail up. Photography by: ©Matveev_Aleksandr | Getty Images

I’m seeing happy tails here now, but the first few days at the new house (and while packing at the old place) was a different story. Tails were low in position, meaning they were not quite sure what was up, perhaps expecting trouble. Some of my shyer cats actually curled their tails between their legs, as if to protect their most sensitive areas. This is a sure sign of extreme fright and anxiety. Once they began to settle in, I started to see some cat tails whipping around in anticipation, as they slowly explored the new terrain, still feeling a bit fearful.

And let’s not forget the “bottlebrush tail.” This is when all the hairs on a cat’s tail puff out, and a fight is likely to be brewing. I did see this tail type a bit as my cats began to claim various spots around the new house; we had some tiny disagreements, but nothing serious.

Your cat’s eyes can also tell you something about how he’s feeling, provided you look at the rest of his body language, too. When your cat is feeling mellow, relaxed or sleepy, his pupils will be a pretty good ratio of black pupil to color. But if your cat sees something that catches his attention, such as a bird outside or a toy you have tossed his way, his pupils will narrow as he fixates on the object. Watch as your cat gets ready for the “hunt” as he approaches his “prey,” his pupils dilated to pure black as he goes in for the grab.

Cat staring at the camera. Photography by: ©oksy001 | Getty Images

Again, depending on the situation, your cat’s eyes might also turn black from fear instead of intense excitement, and those tiny black slits can mean either relaxed contentment or fear. The situation always needs to be considered, as well as your cat’s full body language, in order to completely comprehend what those cat eyes are saying.
Luckily, I didn’t really see much fear in my cats’ eyes, except on one occasion when I was crating them all up. Picasso freaked out a bit and her pupils got wide as she cried while her kitty pals got put into cages. It broke my heart! But then she happily let me put her into a cage without a fuss, so she could come along with me and her pals.

Your cat’s body posture is the last piece of the puzzle to understanding how your cat is feeling. If your kitty is hunched over with his tail wrapped around himself, hunkered down low as if he’s trying to disappear, he is either highly stressed or ill.

On the other hand, a cat who is sure of his surroundings and is feeling secure will sprawl out confidently, perhaps even exposing his delicate underbelly (a sure sign of love and trust) as he naps in the sun. Warning — this might not be a real invitation to touch his tummy! Another time you may see your cat expose his belly is while being attacked or bullied. Some people say this is a surrender gesture, but I disagree. Kitty is actually getting ready to use all four paws’ worth of claws to protect himself from harm.

An arched back usually indicates fear or aggression, especially if accompanied by hisses and spits. However, a kitten with an arched back while happily jumping around is simply learning how to act like a cat. Who hasn’t loved watching a tiny arched-back kitten trying his best to intimidate a larger cat, or even the family dog?

Cat arching its back and hissing. Photography by: ©GlobalP | Getty Images

Once we’d been inside our new home for a few days, my alpha cat, Boo-Boo, began reclaiming his “alpha-ness” by using his body posture to intimidate the other cats. It’s fascinating to watch as he walks over to another cat, and merely by lowering his head, positioning his ears slightly to the side and blackening his eyes, I will see fear take hold in the other cat as he or she quickly scurries away. All without one noise, one claw or one hiss. My cats have a language among them that is all their own.

Devoting her entire life to cats, Rita Reimers is a founding owner of JFCATS.com, a feline health and wellness company. JFCATS has been providing cat behavior services and cats-only pet-sitting for the last 15 years. Rita and her business partner, Linda Hall, are also starting a line of USA-made cat toys and bedding called Gracie & Esther. You can reach Rita directly on Facebook and Twitter @TheCatAnalyst and on Instagram @RitaReimersTheCatAnalyst.

Do Your Cats Act Differently When Autumn Arrives?

Dealing With an Aggressive Cat? 7 Reasons Why Cats Become Aggressive