Next on The Scoop: 5 Signs of Cat Dental Disease
Catster News 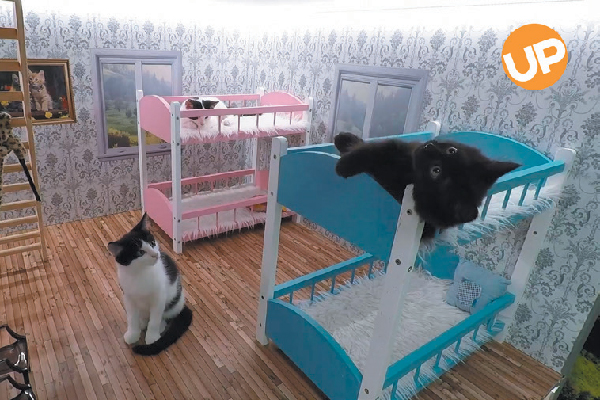 Reality TV Goes to the Cats With ‘Meow Manor’

'Meow Manor' is a reality TV show that follows a rotating cast of adoptable kitties as they live it up in an adorable, feline-sized house.

Reality TV is one of my guilty pleasures — it’s dramatic, it’s entertaining and sometimes downright catty! Now there’s one reality show that’s catty 24/7 — Meow Manor, a series that tracks the lives of three cats (Björk, Óðinn and Freyja) and includes a 24/7 feed to watch the felines play, sleep and make their own drama — mostly in the forms of kitty mischief.

Inside the Meow Manor House

Meow Manor is set within a house sized for kitty living: feline-sized bunkbeds, tables, a yard and even retro chairs. The house’s artwork was carefully chosen, too. “Since this is an Icelandic production, we decided to have famous Icelandic artists, politicians and public figures as often as we can,” Meow Manor producer Hildur Kristjansdottir explains. “Currently, we have a picture of our president, Guðni Th. Jóhannesson. Sometimes, the pictures can be of old residents of the house.”

This Reality TV Show Is For a Good Cause, Too

Old residents of the house? Yep. Timothy Kuryak, SVP Unscripted Development and Production at UP, says that one of the goals of the show is to get the kittens adopted. The kittens stay in the house for up to six weeks, being socialized with the other kittens and humans. The house’s rotating roster includes kittens from the Kattholt shelter in Reykjavík, Iceland. Once the current Meow Manor kitties get adopted, other homeless cats can be featured (a new “season” of the show!).

A calendar featuring the cats is also available, with proceeds put toward Kattholt. “There are tons of crazy moments in the house, but we think the craziest was when the season four cats tore down one of the cameras,” Hildur says. It sounds fit for TMZ, but it’s actually not. Hildur continues: “He wasn’t irritated or anything … just found a shiny new toy!”