Next on The Scoop: 5 Quirky Eating Habits I Share With My Cats

Update May 15: According to 23ABC News, the dog in the video is an eight-month-old Chow and Labrador mix who belongs to the family’s neighbor. No one has reported further information on the state of the dog’s training or any known behavioral issues. The dog escaped from the yard while the neighbor was pulling out of their driveway. After the attack, the neighbor called 911. The dog will be held for observation and then euthanized. The cat in the video is named Tara and she was adopted by the family in 2008. Jeremy is the name of the little boy in the video and he has mild autism. Jeremy and his mother had just arrived home and his mother was watering a tree while Jeremy played.

I have to admit: I don’t really know what to say about this video, and that’s a big deal because I am a pretty opinionated person. I am also an advocate for cats, dogs, children, and for acknowledging the incredible responsibility it is to care for them. A responsibility that is not to be taken lightly.

So this video is really difficult, inspiring, and heartbreaking to watch. A Bakersfield, California, mother and her son were out enjoying the sunshine on their front lawn when the son was viciously attacked by a loose dog — and the home’s multiple surveillance cameras caught it on video. The dog’s attack seems pretty unprovoked and is extremely violent, but what could have been a tragic afternoon for everyone was abated by an unlikely hero. The family’s cat. 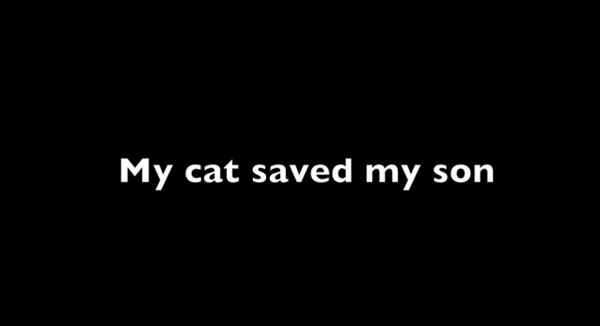 The video is below. It’s shocking to watch and contains some pretty graphic images of the boy’s injuries. Please exercise caution and discretion when viewing.

Lots of things went through my head while I watched and processed the video:

The dog is in custody and being observed by authorities. I’m glad the boy is okay and that the cat was his savior, and I hope whatever happens to the dog is in the dog’s best interest and takes into account how owner neglect might have factored into this incident.

The video is timely considering that next week is Dog Bite Prevention Week, so with that in mind, we’d like to recommend further reading on dog bites over at Dogster.

Read about dogs in the news on Dogster:

About Liz Acosta: Dogster’s former Cuteness Correspondent, Liz still manages the site’s daily “Awws,” only now she also wrangles Dogster’s social media. That’s why she wants you to follow us on Facebook, Twitter, and — her personal favorite — Instagram. See ya there!

Posted in In The News, Catster Heroes, Vid We Love,