Next on The Scoop: 8 Ways to Make Your Senior Cat’s Golden Years Comfortable
Confessions

The Real Trend Nowadays Is Cat Men, and I’m Dating One

There's so much talk about cat guys. What's going on? If this is a paradigm shift, count me in!

Editor’s Note: Shana Dagenhart is a writer for Catster’s sister SAY Media site, xojane.com. This article first ran on xoJane, and we’re running a shorter version (with permission!) so you can comment on it.

What do we call an unmarried thirtysomething living alone with one or two or three cats? A cat lady. What if it’s a straight man?

A very real phenomenon is happening right now, I swear. It’s the invasion of the “cat men.”

This topic has been consuming my thoughts since last summer when I found myself single — again — and starting to look for love. I began my search, as many New York City women do, on the Internet. OKCupid to be precise.

I’d used the site twice before, but this time I noticed something: NYC men seem to love their cats.

Yes, there were a couple of men with dogs, but overwhelmingly it seemed the ones with pets had cats, sometimes multiple cats. When did that happen? 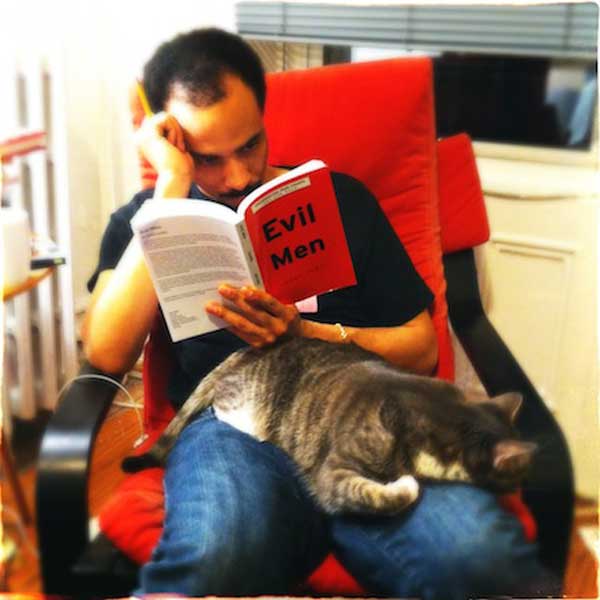 Not that long ago, a man with a cat was a red flag for many women, myself included. Cats aren’t exactly the manliest of pets, right? I even had a gay friend tell me that a man with a cat in the movies reads as gay. That the cat is meant to telegraph its owner’s homosexuality.

Frankly, I had never made that association, though I can sometimes be naive about those things. For me, movie men with cats always bring to mind villains like Dr. Evil from the Austin Powers movies or even Vito Corleone from The Godfather. Either way, though, gay or villain, that’s not what I’m looking for in a relationship.

However, the men with cats on OKCupid were avowedly heterosexual, at least the ones whose profiles I was looking at — and most of them didn’t seem particularly villainous. In fact, the vast majority seemed relatively normal, or as normal as people looking for love on the Internet are.

Last summer’s cat men I dated also seemed relatively normal. These were seemingly nice guys who happened to have kitties. Despite the fact that I am slightly allergic to cats, I figured it needn’t be a deal-breaker, and besides, my allergies really only get going when there are two or more cats.

If I could find a nice, single man in the city who happened to have a single cat, what was the big deal? In fact, that is exactly what happened.

I wasn’t hit by OKCupid’s arrow. Instead, it was my friend Ben who inadvertently connected me with my current man and kitty. Ben spent the end of last summer trying to set up his single female friends with his single male friends. I’m pretty sure he did this more for the guys’ benefit than the gals’, and to be fair, his Cupid’s arrow mainly missed the mark.

I met my current beau when Ben invited me to the reading of a writer he thought might be a good match for me. Following the reading, people went for drinks, and I did meet a writer, albeit not the intended one. After a couple of dates, I ended up going home with this guy only to discover that he had — surprise! — a cat. It’s a good thing that Katia, his cat, seems not to bother my allergies too much because months later, I’m still seeing the writer and his cat. They both took care of me while I was recuperating from recent surgery, and I’ve made peace with the whole men-and-cats thing. 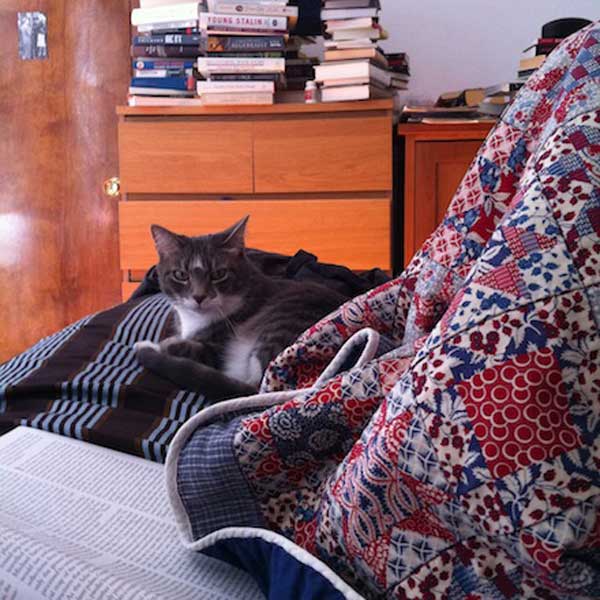 However, as I met more of the writer’s friends and discovered that some of them are also single, thirtysomething, straight men with cats, I really started to wonder exactly how this whole cat men trend happened.

I felt like the world had turned topsy-turvy. After all, the phrase is "cat lady," right? And just as with most derogatory terms referring to women, there is no male equivalent. Cat man sounds odd. At best, I’m picturing a man trying to rock a Catwoman suit, and it’s an odd pairing. 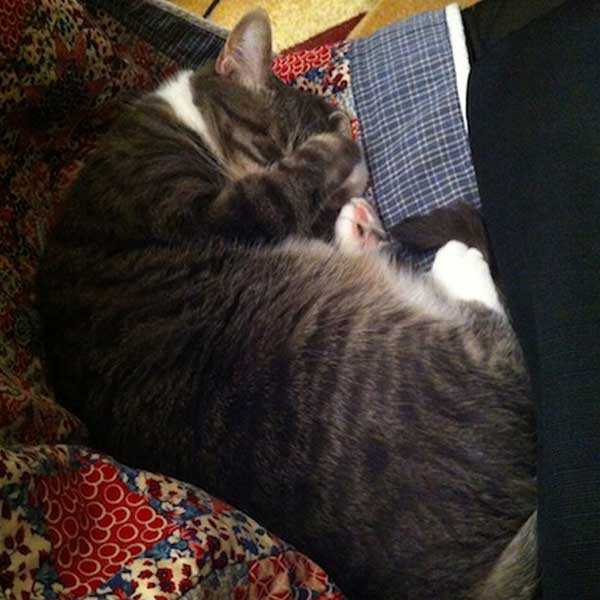 What about me? I’m a single, thirtysomething lady, so shouldn’t I be getting ready to hunker down into spinsterhood with a pack of kitties?

No chance. First, there’s the aforementioned allergy. I have a one-cat maximum.

Second, though I grew up with a veritable menagerie of pets including plenty of cats, I always imagined myself getting a dog if I became settled and financially stable enough to have a pet.

Apparently, given the stereotype, people find this strange, and I’ve been asked to justify my position on cats vs. dogs on numerous occasions.

The answer is simple: I do not want a pet with my own personality. Like a cat, I’m perfectly capable of being independent and taking care of myself, but like a cat, when I want attention from the people around me, they’d better drop what they are doing and give it to me.

Unlike a cat, I won’t scratch your face or vomit and poop in inappropriate places to get back at you for not giving me what I want, but I do tend to act out in my own unhealthy and annoying ways when I don’t get what I want.

I prefer dogs because they are eager to please and generally undemanding beyond the whole walks-and-food thing. You meet their basic needs, and they are there for you unconditionally. Sadly, even abused dogs protect their masters’ interests. Cats, however, as a recent New Yorker article pointed out, chose to live with humans, and their take-us-or-leave-us attitude isn’t an attitude so much as an evolutionary fact.

However, none of this answers the question of why so many cat men.

To be fair, I never asked any of the OKCupid guys about why they had cats. To do so would have felt aggressively rude or prying.

However, a New York Times article on the subject of men and cats back in 2008 posits a few possibilities, the main one being the ease of having a cat, especially if you travel a lot. Cats, it seems, are practical city pets. This view was seconded by my current beau.

When I asked him why he had a cat — something I found neither rude nor prying since he’s the one who first encouraged me to write about this subject after hearing a rant on the topic — he gave me three reasons, one of which was an attraction to their independence. At the time he acquired his cat, he was assuming he’d move to New York soon. He told me he couldn’t imagine cramming a dog into a tiny New York City apartment, but a cat? No problem.

Reasons No. 2 and 3 from the writer were possibly particular to him, though then again, maybe not. Reason No. 2 was nostalgia, and No. 3 was chance.

The nostalgia was for his first cat, one he’d owned as a kid in Greece and was particularly fond of. After that, he’d had a dog, so it was easy to be wistful for a cat. As for chance, well, his aunt had found a stray who’d just had a litter of kittens all in need of homes, and the one he took home and called Katia was, according to him, terribly cute as kitten.

Cats are not without their charms, a fact men seem to be recognizing more of late. Perhaps they’ve always recognized it but only recently begun to feel secure enough in their masculinity to declare their kitty allegiance? Maybe it’s the fact that strict separations between what’s masculine and feminine have further broken down in recent years.

However, it seems that now might really be the cat man’s heyday.

After all, IFC has a new show Maron, based on the real life of its star, comedian and podcaster Marc Maron. Mr. Maron, it seems, is quite the cat lover. In the two-page ad that ran in The New Yorker, one side was a list of tweets — and one of the tweets had Mr. Maron musing on the possibility of having children, a possibility he couldn’t imagine despite having three cats who are "obviously not blood relations."

The other side of the ad had a list of what the world would know about Mr. Maron after watching his show. From a list of six, No. 1 were Mr. Maron’s issues. No. 2? His cat’s issues.

Want more on cat guys? Of course you do: