Next on The Scoop: 5 Ways That I Will Never, Ever Be Good Enough for My Cat
Catster Exclusive

House of Nekko: How My Friend Made His Home a Cat Paradise

We talk to Peter Cohen, a contractor whose home remodeling project includes 150 feet of skywalks, tunnels, and stairways, all for his cats.

Editor’s note: After you read this, make sure to read how Marci remodeled her own house to make it a kitty dream home and designed and built a dream catio.

Just north of Santa Barbara live 18 very lucky indoor-only rescue cats — lucky because their caregiver is a custom contractor with an artistic flair. House of Nekko (which means "cat" in Japanese) is a 3,000-square-foot home with an additional 150 linear feet of skywalks, tunnels, and stairways. All that home remodeling was done just for the cats. 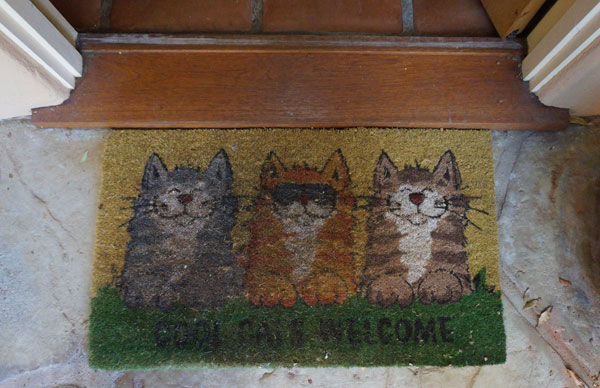 Peter Cohen’s vision began when he bought The Cat’s House by Bob Walker, which is full of photos of the famous cat-friendly house in San Diego. As co-owner of Trillium Enterprise Custom Builders, Peter had access to the best craftsmen in the area to help him fulfill his own dream of providing a stimulating and playful environment for his own cats. 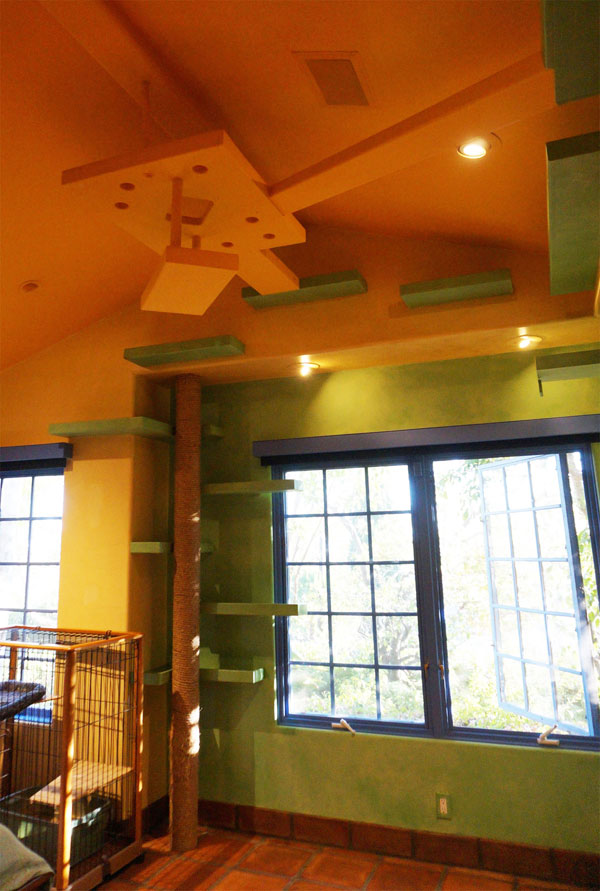 "The first cat walks were installed in the upstairs master bedroom, around 1997," says Peter. "From then on, it just kind of grew into a hobby. I would often trade tools with some of the finish carpenters who would build the catwalks in their down time. We would figure out something fun to build and they would then have pretty much free license to be creative." 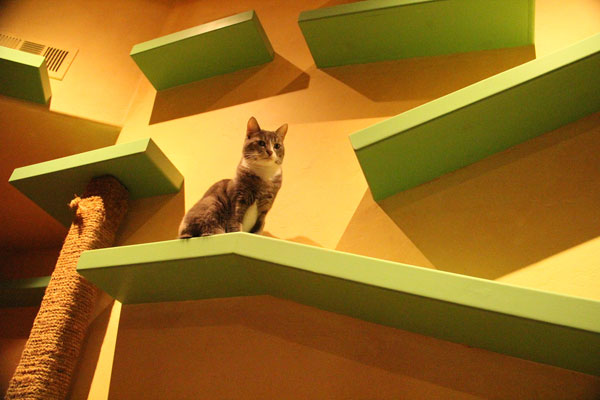 This simple beginning morphed into a kitty paradise. Tunnels connect rooms throughout the house, and brightly colored perches, ramps and custom climbing poles add a flowing artistic theme. Toss 18 cats into the mix and it becomes an endlessly changing landscape. 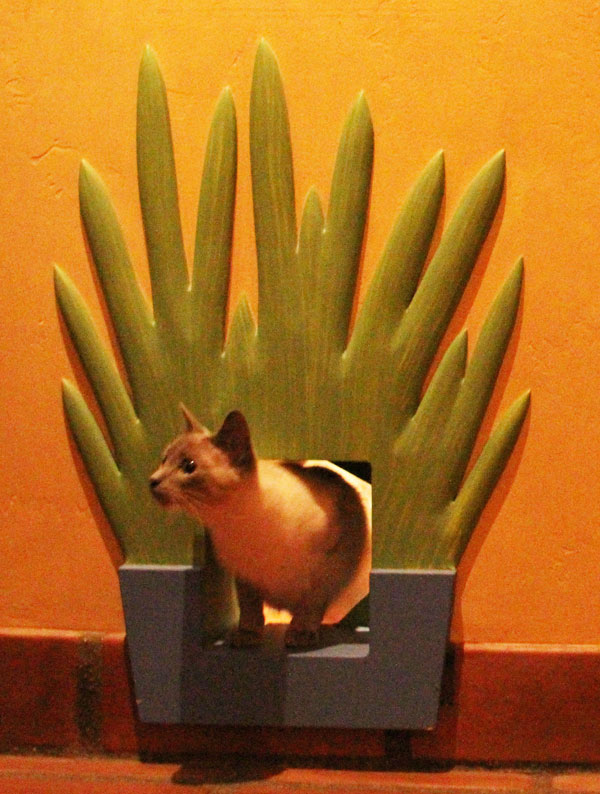 Peter grew up a dog person, never having a cat until he bought the tract home that became the House of Nekko. The house, he found, came with two cats. After first one and then the other was killed by cars, he swore any future cats who came into his life would be kept indoors only.

I asked him how and why he ended up with 18 cats, all female and ranging in age from 18 months to about 15 years old. As with all multi-cat owners, it just sort of happened.

"All 18 are rescue cats," he told me. "We used to adopt them from either the Humane Society or the local animal shelter, but they started refusing to give us any more because they said we had too many. So we started adopting from out-of-town shelters. We try to take the kittens that other people don’t want, especially kittens that have been traumatized." 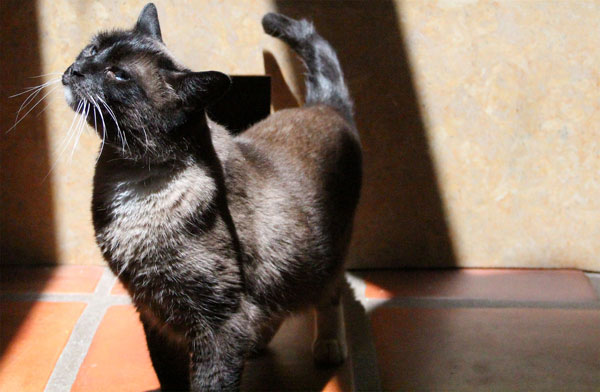 "I never intended to have so many," he continued. "It is way too expensive and a tad too much work. It is just so hard to not want to give a home to cats that need one. So now I stay far away from anywhere that has kittens for adoption. We only adopt kittens because it is easier to introduce them into our house. I often see ads searching for homes for cats and feel bad we cannot take them as well."

As enriched as the environment is, it is good to know what constitutes enough cats. Peter is by no means a hoarder, as can be seen by the state of his home and the health of his cats. Of the 18, five have medical issues. With that and the yearly exams, he is Airport Animal Hospital’s best client. Besides giving great veterinary care, the awesome Dr. Bill Wallace has been wonderful with discounts and the occasional home visit. 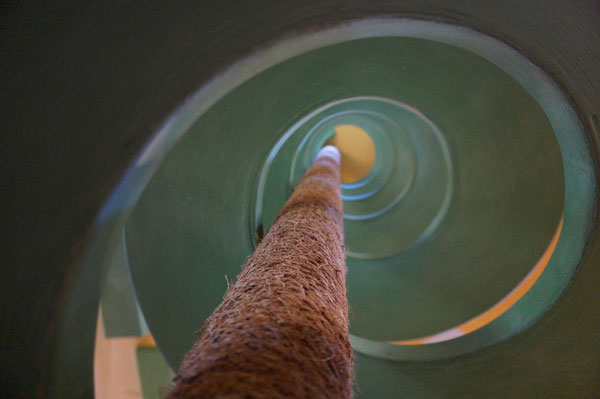 As I wandered through the house taking videos, I noticed all the closed-circuit cameras. Installing home surveillance equipment is a sideline business of Peter’s. There are 25 cameras in House of Nekko that allow him to keep an eye on the secret lives of his cats from any TV in the house.

"Working from home with cats around is really nice,” he says. “Even when they get in the way, I still enjoy their calming presence. We do have soothing music playing 24/7, both for the cats and me.”

Amy Shojai, fellow CWA member and certified behavior consultant, says, "A soothing music rhythm that’s very close to the heart rate and the brain waves will actually ‘entrain’ the heart, breathing and brain to keep tempo, slow down the rate and hence, have a calming effect. I’ve seen videos from Susan Raimond of harp music being played in a noisy pet products store with barking dogs, meowing cats, screaming birds … and literally, within 5 to 10 minutes of the music playing ALL the animals fell silent and most dozed off."

Add to that gentle music the gurgling of several water features and you have a Zen garden for cats and humans alike. 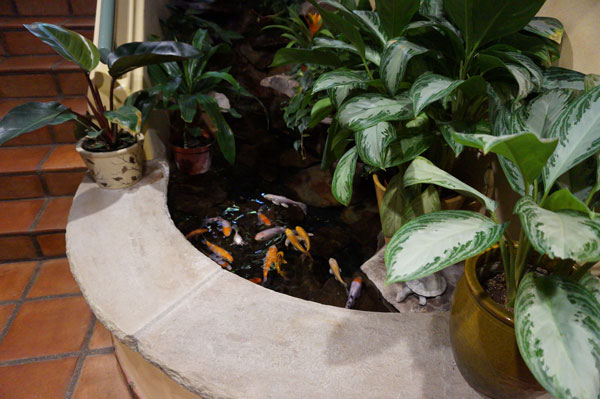 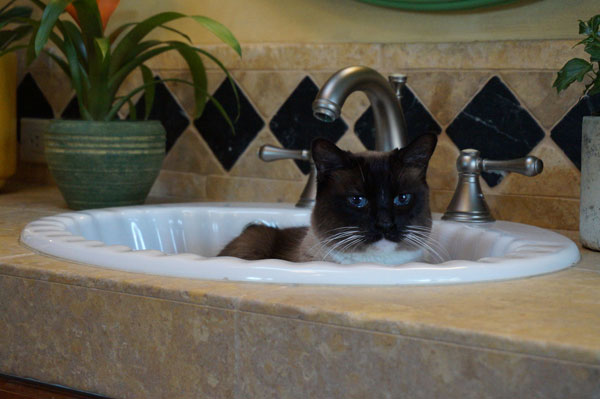 With all those cats in the house, amazingly there is no hint of litter-box odor at all. There are 24 litter boxes, some of which are on shelves within closets that have exhaust fans. Each shelf has a cat-sized hole cut into it and the top level sports a tunnel into the next room providing an exit from bullies. The one pictured has a door that rolls up with the touch of a wall switch. 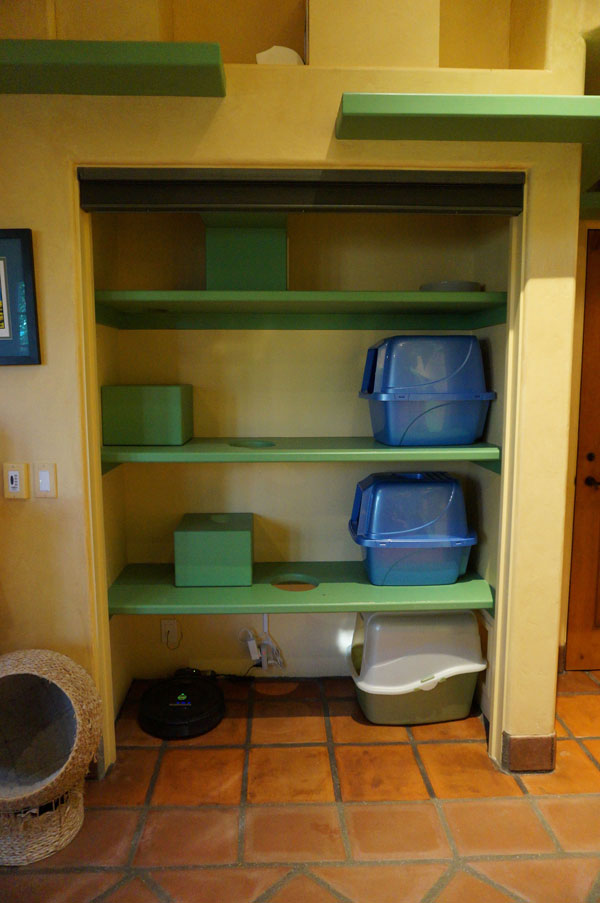 Within any large group of felines and humans alike, there will always be someone in a bad mood, or a bully. House of Nekko contains some isolation rooms, which can be shut off from the main tunnels and walkways. Every tunnel entrance has a lockable door for just this reason.

Peter knows every one of his cats and tunes into their personalities. It would be great if they all just got along, but since they don’t he is able to keep peace by being innovative. The bullies are allowed visitation with the main group by way of a small cage open to the tunnel into the isolation quarters. 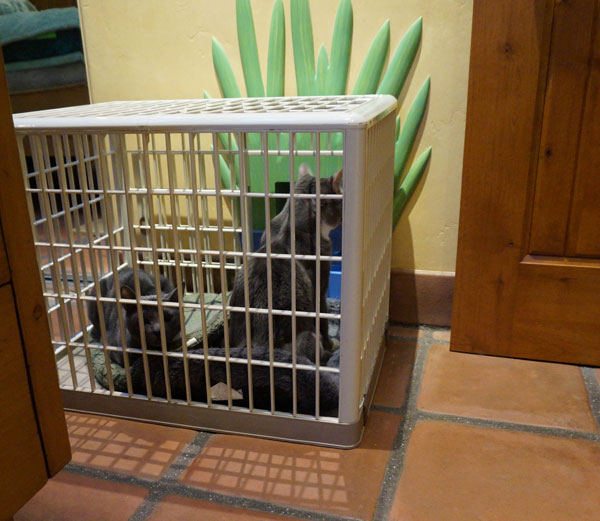 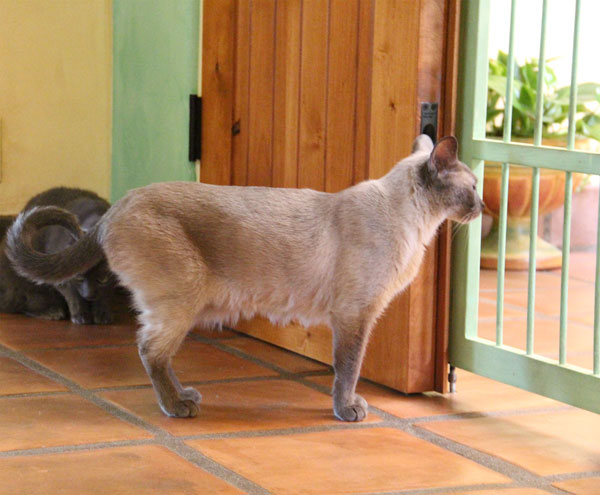 There are some beautiful memorials to those who have passed away. Three of my favorite ones are Gizmo’s Shelf, Bobby’s Paw Thru Cat Wash, and a wall-hanging containing names of current and former residents.

Of course, being in the business, Peter was able to go all out with the best of the best. His home was not all "cat-orized" at once, but spread out over time, as any thematic project progresses. 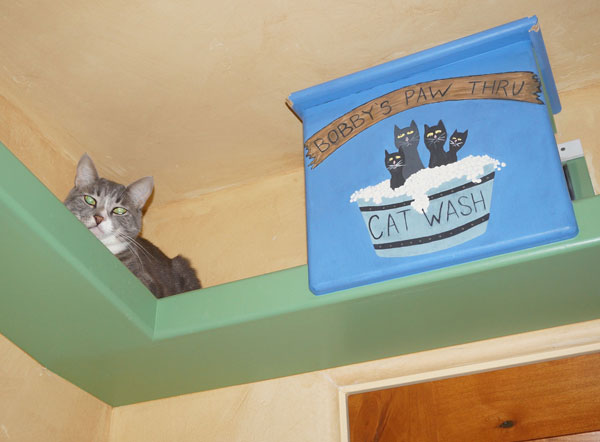 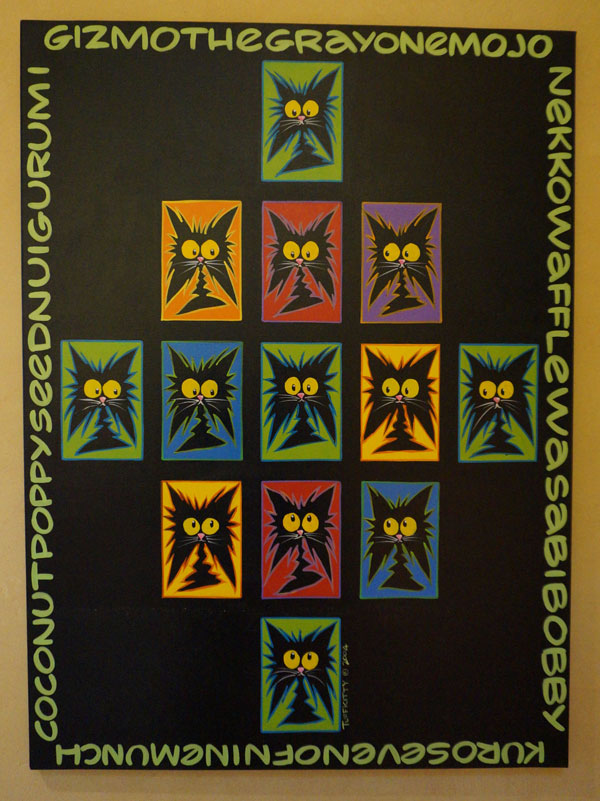 "Giving rescued cats a better life means giving them a place that is solely their own. They give us unconditional love, and building the catwalks is one way of expressing my gratitude for that," states Peter.

"They are very calming and fun to be with; hanging out with cats always relieves the day’s stress; it’s zen by cat. I am a builder and I like art, so I love the fact that catwalks are like living sculptures. The cats definitely enjoy them and I try to build them so I like the look of them as well. In that sense, we both win," he continues. 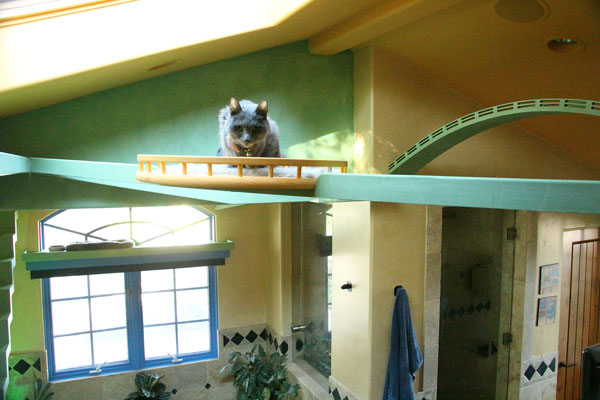 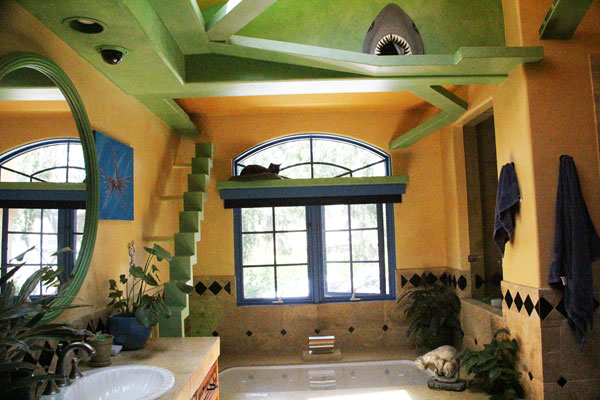 House of Nekko is very colorful, full of greens, blues and yellows. Struggling with my own house of neutrals, I asked for some advice.

Peter encouraged me, "Don’t be afraid to go bold. Live with it for a while and, if you don’t like the results, it’s only paint, which can easily be changed. I have always gone against the idea of choosing neutral/formal colors for anything. Just understand that working with color is difficult and it is not unusual to go through five, six or even more colors before you find the combinations you like. It takes patience but it is well worth it. A colorful environment brings a warm feeling of fun and happiness, which is an attitude I try to maintain in my daily life." 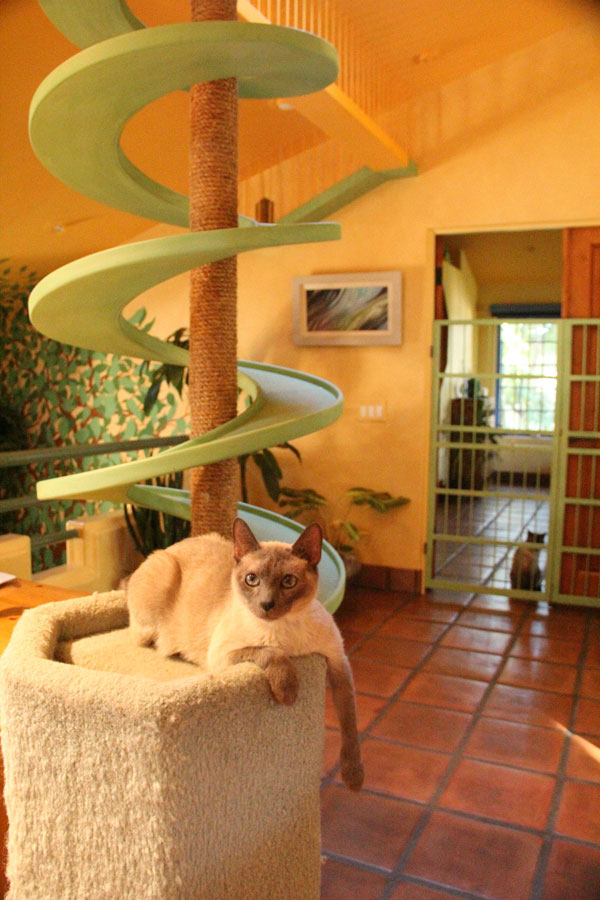 I asked about the dangers of falling. Peter assured me that he does not usually build open walks more than seven or eight feet off the ground. “Some in my house are 12- to 14-feet high, but we enclosed them with dowels to prevent the cats from falling or jumping." 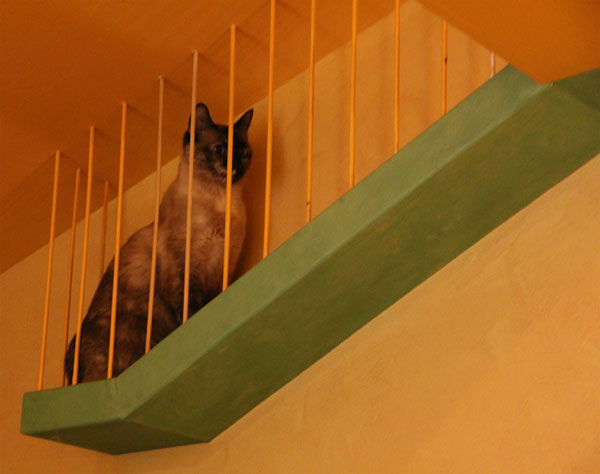 "Cats like to go high," he continued. "They love shelves up near skylights or just high up in a room. We try to incorporate climbing/scratching posts because cats like them. We also make sure to allow for human access to all areas. That is, we won’t build a tunnel or area that cannot be reached in case one needs to grab the cat, clean, etc."

Peter’s use of artistic shelving and stairs is amazing. It is obvious that the cats love them and that their caregiver knows felines. There are napping baskets tucked onto landings and the ramps and stairs just beckon the users to run and jump, thus providing the exercise needed for healthy muscle and bone. 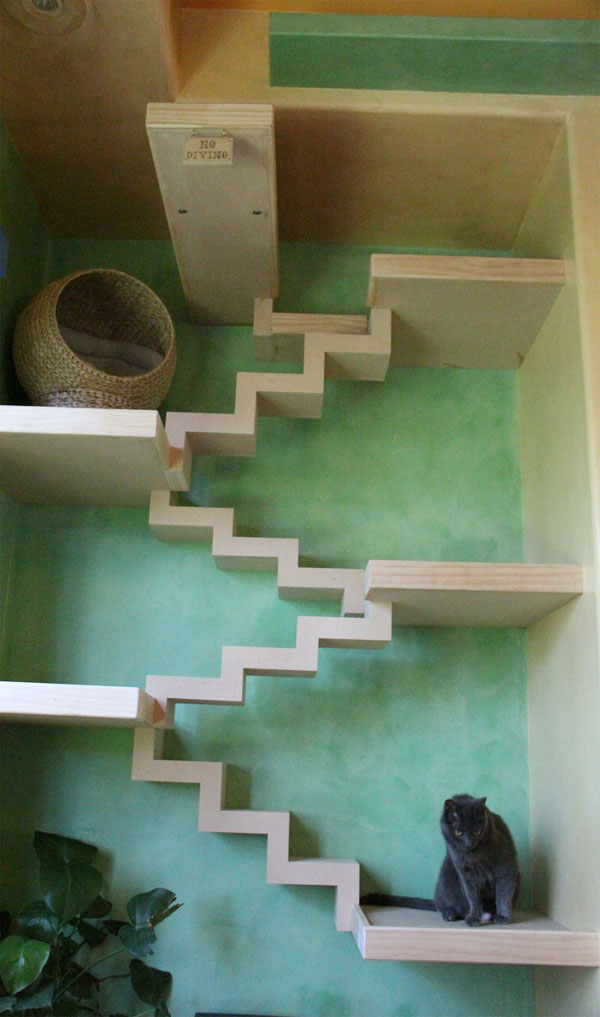 As I regretfully left House of Nekko, call me an enabler, but I encouraged Peter to expand into his backyard. The enclosed and lush landscape just begs for skywalks and a playground, and fresh air is so good for cats.

If you are interested in cat-orizing your own home, Peter is available for consultations. You can contact him at peter@trilliumonline.com for a free estimate.

More things to build for your cats:

About the author: Marci Kladnik, her four rescue cats, and one Scottish Terrier live in a small town with no stoplights or mail delivery. A retired graphic designer and technical writer, she designed and wrote for two publishers and two medical device manufacturers. She was also on the masthead of the monthly National Model Railroad Association Bulletin.

Marci now writes an award-winning biweekly cat column for three newspapers, is a contributing writer for Catster.com, an award-winning photographer, and an active professional member of the Cat Writers’ Association. Involved in TNR and feral rescue, she sat on the Board of Directors of Catalyst for Cats, Inc. from 2007-2013. In her spare time, Marci traps and fosters local feral cats and kittens. Past columns appear on www.catalystforcats.org, and her dog blogs atwww.maggiestories.com.