Next on The Scoop: The Truth About Cats and Dogs: Sometimes It Ends in Tragedy
Ask a Vet

Why Do Some Cats Hang Their Heads Over Their Water Bowls?

When a cat spends hours with her head over her water bowl, the most common culprit is kidney disease.

Several nights ago I treated a very sweet, very tiny Himalayan. The hair on the front of her chest was continuously wet. I and the technicians would dry her, and she’d almost immediately become sodden again. This was because she elected to spend most of her time with her head hanging over her water bowl. The long hair on her chest wound up in the water bowl. Of course, I could have simply removed the water from her kennel. But that would have been cruel. She was thirsty — hopelessly thirsty.

In medicine the term pathognomonic refers to a sign or symptom that is distinctly associated with a certain disease. This thing that some cats do — hanging their heads over their water bowls — is nearly pathognomonic for one disease. Nearly, but not quite.

When a cat lolls her head over her water bowl, she is feeling overwhelmingly thirsty. She usually also is feeling nauseated simultaneously. There are a few conditions that can, in theory, make a cat feel this way. For instance, complications of diabetes can cause it to happen. But when a cat spends hours on end with her head over her water bowl, the overwhelmingly most common culprit is kidney disease.

Chronic kidney disease is very common in cats. Any long-time cat person will have had experience with it.

Here’s what happens. In the course of normal metabolism, the various organs and tissues of the body metabolize nutrients, turning them into energy, cellular structures, and waste products. The waste products are released into the blood stream, where they circulate to the kidneys. The kidneys remove the waste products and excrete them in the urine.

Young, healthy feline kidneys can excrete prodigious quantities of waste products into very small quantities of urine. This is part of why cats’ urine smells so bad on carpet: It’s strong. But as the kidneys weaken, they lose their ability to produce such strong urine, and the urine gets weaker. To make up for this, cats start to produce more urine. This makes them thirsty.

Therefore, the first symptom of kidney disease is generally increased thirst and increased urine output. Because chronic kidney disease comes on slowly, this symptom can be subtle and many owners don’t notice it. 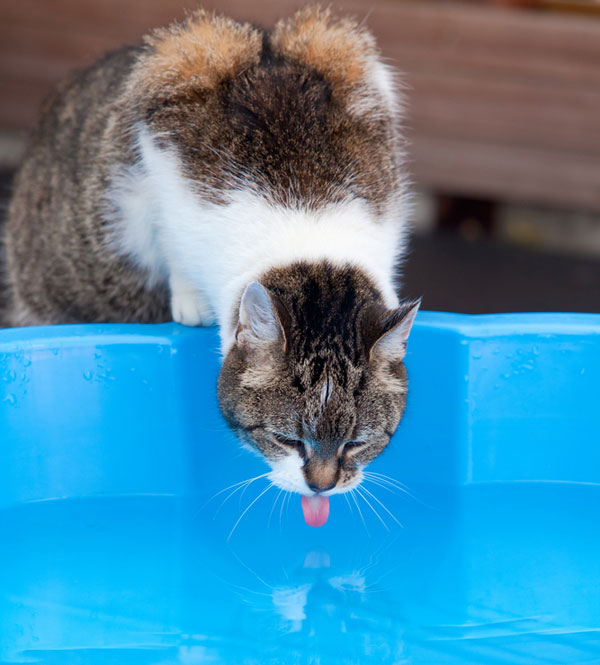 In the early stages of kidney disease the cat feels thirsty but otherwise feels fine. But here is the problem with CKD: It is progressive. The rate of progression varies wildly in different individuals, but over time chronic kidney disease gets worse.

As the disease progresses, the kidneys become unable to clear all of the metabolic waste products from the blood stream, and these products, which are toxic, begin to build up. At first, many cats are able to tolerate higher-than-normal levels of the toxins. However, if the process goes on long enough the cat reaches a tipping point and begins to feel sick.

High levels of the toxins cause a variety of clinical signs. Lethargy and weight loss are most common. Poor appetite (which might first manifest by becoming more “finicky”) is very common. The hair coat may become rough or malodorous (kidney disease causes bad breath, and this odor can spread over the coat during grooming). Vomiting may occur.

At the end stage, cats end up in very bad shape. The toxins in the blood stream may cause ulceration of the mouth. The kidneys are responsible for producing a hormone, erythropoeitin (also known as EPO, made famous by Lance Armstrong), that stimulates blood cell production. Cats with end-stage kidney failure don’t produce the hormone, and they wind up the opposite of Lance when he was doping: anemic and weak. They suffer from a complex condition called renal secondary hyperparathyroidism in which blood phosphorus levels build up. They become simultaneously thirsty and nauseated. They sometimes move to their water bowls and hover — sometimes for days. 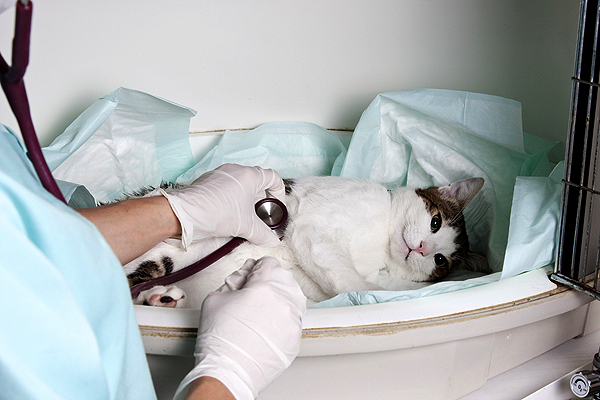 The most basic and readily available treatment for kidney failure is fluid therapy. The Himalayan in question was receiving aggressive intravenous fluids. These fluids give the kidneys more water with which to work, and if there is sufficient renal capacity, they help the kidneys to flush out the toxic metabolic waste products that have built up. Cats that show sufficient response to intravenous fluids are often able to go home, where they receive owner-administered injections of fluids under the skin.

There are many additional treatments that are used for cats with kidney failure. These include EPO injections, administration of so-called phosphate binders (to help reduce absorption of phosphorus from the intestines), dietary supplements, and diet changes (more on that in just a moment). However, fluids are by far the most effective practical treatment for kidney disease.

Sadly, kidney disease is a progressive problem. Not all cats will have sufficient renal capacity to respond to fluids, and even those that do will usually come to a point where they lose that capacity.

Advanced treatments for kidney disease such as dialysis and kidney transplants exist for cats. They are available at select tertiary referral centers such as elite veterinary schools. Sadly they are not practical for most owners, many cats are not good candidates for the procedures, and they cause certain ethical dilemmas (I can voluntarily give a kidney to a loved one, but it is not possible to obtain consent from a feline kidney donor).

The burning questions that many cat lovers have are what causes kidney failure, and what can be done to prevent it? The cause has not been definitively determined. There is a hereditary component, and some breeds are especially predisposed to the condition. (Although the condition is common in all cats, and not just domesticated ones. Remember Macho B?) Many experts simply surmise that cats have been engineered by nature for their kidneys to be the first organs to fail.

In a way this makes sense. Evidence suggests cats evolved in the deserts of north Africa and the Middle East. Wild cats’ reproduction and life strategies are very different from those of house cats. In the wild, cats only live a few years before they succumb to disease, starvation, aggression, trauma, or predation. They reproduce wildly during this time. Their kidneys, so the theory goes, are designed for the desert: They are very powerful and they conserve water. In this sense the kidneys are like engines running on redline: very powerful, but also at risk of burning out.

Burning out is not a problem for a wild cat living only a few years. But give that cat a good home and she may live 15 years beyond her life expectancy in the wild. That’s when kidney failure becomes a problem. 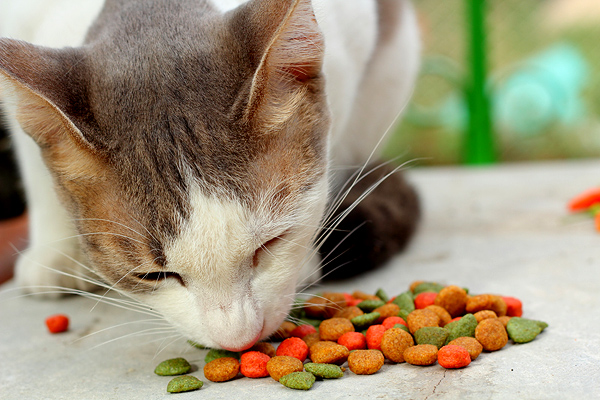 And then there is the matter of diet. This matter is a contentious one, to say the least. Could cat foods — especially dry foods, since they don’t have much water and help contribute to the kidneys running on “redline” — be contributing to high rates of kidney failure? At this point we don’t know but my hunch is that they might be. Ten years ago low-protein, high-calorie diets were recommended for cats to prevent and treat kidney failure. Now high-protein diets are being recommended, at least for cats with existing kidney disease, by some of the most respected veterinary nutritionists. Over the past decade cat diet recommendations have generally migrated away from carbohydrates and towards proteins. But when it comes to the effects of diet on feline renal failure, as in so many things, more research is needed.

You can read more about renal failure on my website.

Got a question for Dr. Barchas? Ask our vet in the comments below and you might be featured in an upcoming column. (Note that if you have an emergency situation, please see your own vet immediately!)