Next on The Scoop: 8 Steps to Trap, Neuter, and Return Feral Cats
Catster Holidays

I Don’t Care What You Say: Cat Guys Make the Best Husbands

Once I realized the extent of John's cat-mandom, I was in full swoon.

When I met John nearly 25 years ago, he knew I loved cats. I collected cat books and statuettes, befriended neighborhood kitties, and shared my home with a gorgeous black cat named Daphne. I knew his family had always had cats, but at the time, his lifestyle wasn’t one that allowed for an animal companion of any kind.

When we were married a few years later, we decided it was time to take the pussycat plunge, so we adopted Dobie, a huge gray-and-white foster boy. Of course I loved John, but it wasn’t until I saw him in full cat-man mode that my adoration soared to new heights — my little cat-lady heart grew three sizes that day. Over the years, we’ve shared our home with a few cats, including our current furry children, Saffy, Cosmo, and Phoebe. 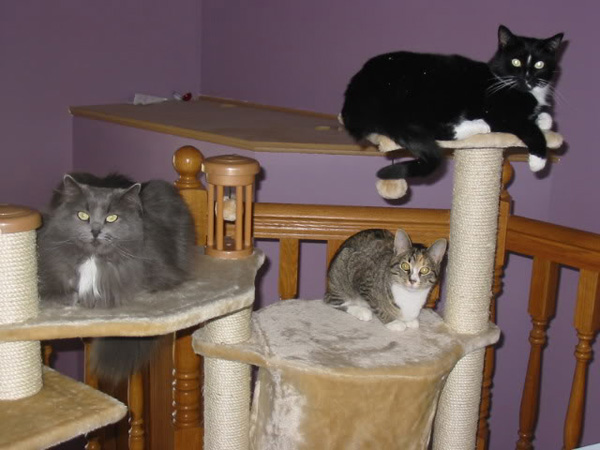 Saffy, our 12-year-old floofy gray girl, is John’s baby. You should hear him talk to her; it’s just the cutest thing ever. And the way she looks at him is truly heart-melting. He likes to hold her like a baby and speak softly to her, calling her “Sweetie” and “Baby.” When he worked in a home office, she’d lie beside him, and he called her his assistant. When I’d walk into the room, he’d always have some excuse for her sleeping on the job. “She’s on break,” he’d try and explain. She sure took a lot of breaks. John feels the need to continually defend her:

John: “She put in a lot of hours, especially the day the temp worker never showed up.”

Me: “What about Cosmo? He could have filled in.”

John: “His work isn’t the same. He’s sloppy. And Phoebe’s too mouthy. Saffy is the perfect assistant.”

And at night, I can always find Saffy curled up beside John, purring full volume. That cat can purr.

John: “I love it when she jumps on the bed, makes a couple of turns, and then flops really hard against me.”

John: “Yes. She never stops purring. Once I was napping and she was purring when I drifted off and stil purring when I woke up an hour later. I love that cat.” 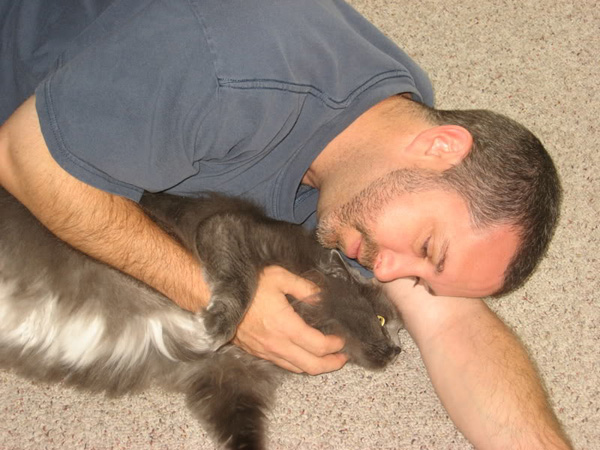 Although we both love dogs, we agree cats fit much better into our busy lives.

Me: “Have you been near the litter box when Saffy drops a number two?” 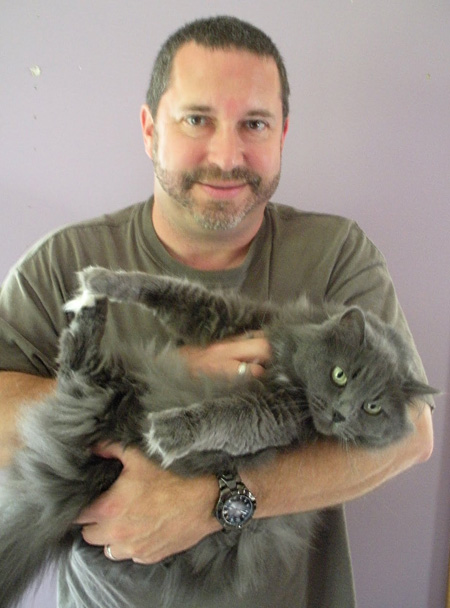 He’s in love with everything about her, and I find that so incredibly sweet and attractive. And he’s convinced he didn’t set out to forge this extra-special relationship with her.

John: “I believe she’s the one who adopted me. We adopted each other. It was just meant to be.”

Isn’t that how it always is? I think it’s that way with people and pets alike. We see each other and just know we’re meant to be together. It was that way with John and me, too. I remember one night in the late ’80s, when we were just great friends, thinking, “I could marry that guy.” I don’t know that I believe in love at first sight, per se, but I do believe we feel certain connections with people and animals, and every time I’ve acted on those gut feelings, I’ve felt incredibly grateful. Speaking of guts …

It’s true — she’s a fluff monster, but the vet says she’s right on the edge weightwise and really has to exercise. We’re pretty good about making sure they all get playtime exercise, but Saffy is sometimes hard to motivate. 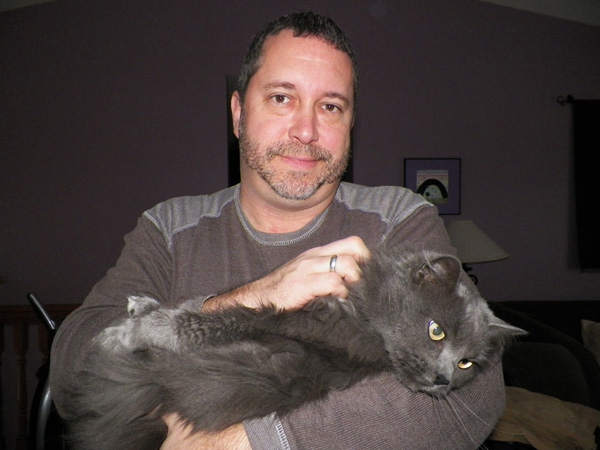 In many ways, John himself is like a cat.

Me: “You’re super laid-back and enjoy birdwatching. You’re a pretty good snuggler, too.”

John: “I am pretty relaxed most of the time. And I usually don’t smell.”

Me: “I have no idea what you’re talking about. I think I hear your cat calling you.” 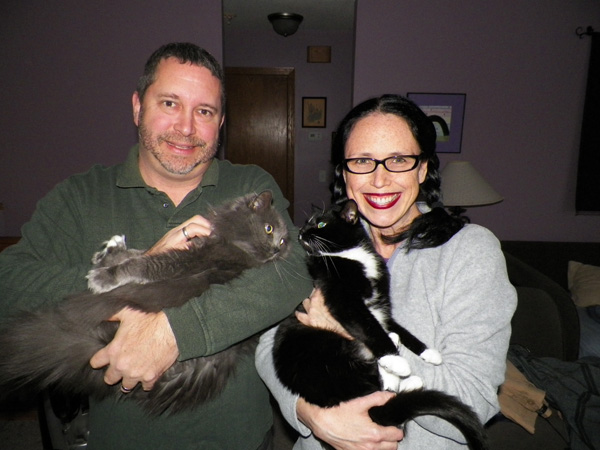 Next month, John and I will celebrate our 22nd wedding anniversary, and we can’t imagine our lives without each other, our two human teenagers, or our cats. What’s our advice for maintaining a strong cat-lovin’ relationship?

Me: “We believe it’s super-important to not take anything personally, laugh lots, spend time together, but give each other space, and always act enthusiastically about looking at cat photos and cute videos.”

John: “Even if it’s the 100th cat photo you’ve seen. Just in that hour. Trust me, I’m speaking from experience.”

Do you have a special cat-lovin’ relationship? Tell us about it in the comments!

How to Give a Cat a Bath and Survive!