Next on The Scoop: These Cats Can Be My Japanese Tour Guides Any Time
Cat Dandy

KitTea will be a Zen-like place where people can relax, hang out with cats, and yes, drink tea.

San Francisco’s second tech boom has wrought profound change in a city that was built (and rebuilt) on profound change. Real estate markets are tight, housing is expensive, and the streets (and restaurants, and bars, and coffee joints, and restrooms) are filled with well-paid youngsters who are nowhere near as colorful as the hippies or various retro kids of yesteryear. Cars wear pink mustaches. (I’m not kidding.) Google shuttle buses run over original cast members from the Summer of Love and laugh. (I’m kidding.) Startup companies are almost everywhere.

One new San Francisco business not related to What Johnny Can Do with His Smartphone involves cats. In fact, as you’ll see later in this post, this development was simultaneously inspired by Tech Boom 2.0 and also rather jaggedly born from it.

When I heard about KitTea I contacted Courtney Hatt, one of three founders. She says her group aims to make a Zen-like place where people can relax, hang out with cats, and drink tea. Education and cat adoption will also be primary goals. Hatt says KitTea is on the verge of launching a crowdfunding campaign.

The KitTea FAQ answers some basic questions about the venture. So I asked more. What follows are excerpts from our online discussion (with more sure to come in later posts). 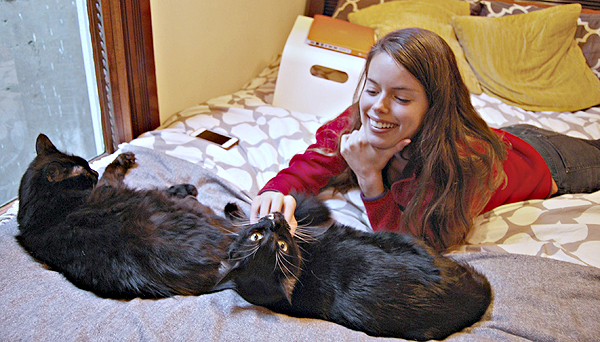 Courtney Hatt and some feline friends.

Catster: Why a cat cafe?

Courtney Hatt: I was very stressed and I felt defeated working on my own Internet startup and other startups, so much so that I got my first panic attack. If you’ve never had a panic attack, it is hard to understand the actual terror you feel. I thought I was dying, I wasn’t exactly sure what from, but I knew I was “doomed.” Following my first panic attack, I began to fear having another, which only brought on more panic attacks. I became agoraphobic for a month or two, and my only comfort and refuge were my cats.

They were inspiring to me, because they live in the moment and have such a calming way about them. Thus after reading about cat cafes in Japan, while sitting at a buzzing cafe myself, I knew this would be a concept that I could bring to San Francisco to not only save cats, but also help people. I now have my panic attacks under control, but I think it is an important personal piece, because I know I am not the only one to be debilitated by them.

Honestly, I need to make it clear that I love all animals, even spiders! I am the odd, or really “fiscally irresponsible” girl, who spent too much money just so I could wash an elephant. Cats, however, have always been a key part in my life. I grew up with cats and dogs, but my energy runs pretty high, so I have always found my cats to be very grounding. I now have three rescue cats of my own: Shadow, Sophie, and Bindi. Shadow is KitTea’s poster cat, literally and figuratively. She will give you a loud purr when you just look at her. She is what rescues call a “no brainer” cat. However, she was nearly euthanized in Santa Monica. 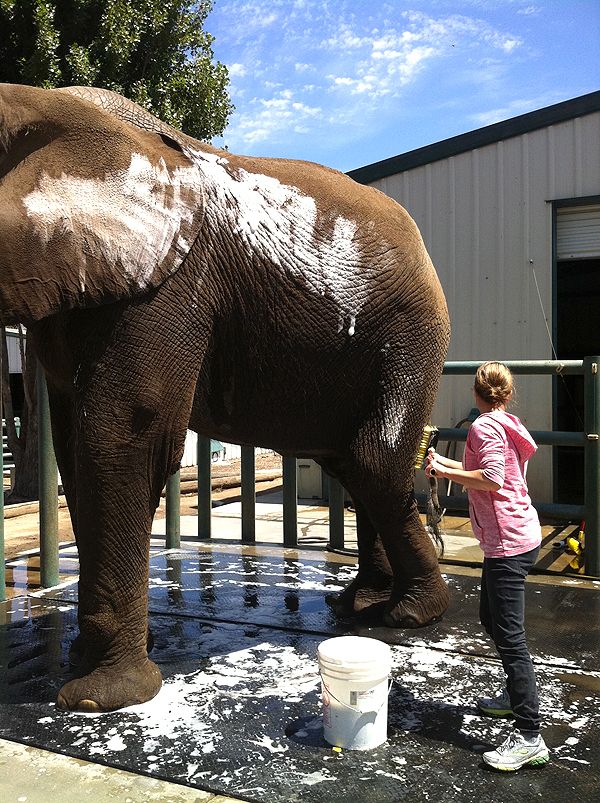 How’s the search for space going?

As one might assume, San Francisco is not the easiest or most economical city to find real estate, and even more challenging, real estate that suits all of KitTea’s needs in a central part of the city. We do, however, have a few pretty good options and we are starting negotiations now.

How are current commercial rents affecting your search?

I think it affects any small business trying to start in SF right now. We don’t want to lock ourselves into a lease that is so out of our range that we can no longer be sustainable or affordable. ÔÇª But it can be done.

Another cat-related venture called Cat Town Cafe is planned across the bay in Oakland. Do you know the folks opening that? Are you looking into a partnership with a bigger company, such as the one Cat Town Caf├® has with Pet Food Express?

We know Cat Town Cafe and we are in correspondence, so we can support one another in this cat cafe adventure. They seem incredibly kind and their mission is similar to ours — saving cats! As for partnering with a larger company such as Pet Food Express, we are open to this depending on the terms. 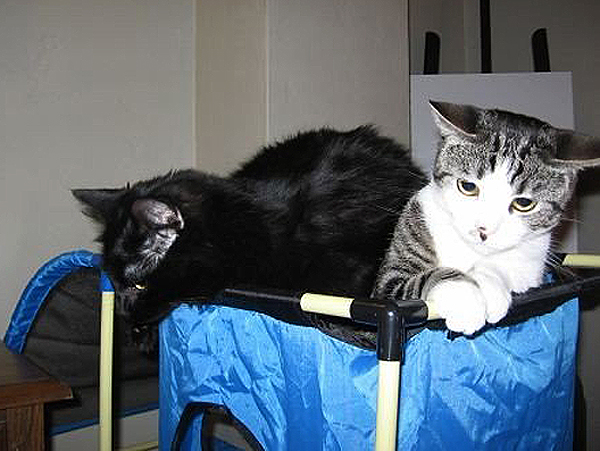 I see that Go Cat Go, Wonder Cat Rescue, and Give Me Shelter Cat Rescue are partners in the effort. How did you come to work with them, and what will each one provide?

I personally reached out to Wonder Cat Rescue and Give Me Shelter. I wasn’t sure what their reaction would be, especially at the start of this venture. The rescues play one of the most crucial roles in KitTea. They will assess which cats and kittens are not only suitable for a group living space, but a space that will also feature new people coming and going. Additionally, the rescues are responsible for handling the process of any adoptions at KitTea. In turn, we provide a brick-and-mortar space for them to rescue more cats that otherwise would have an uncertain future. A percentage of our funds will also go directly to their rescue efforts.

Daniel Quagliozzi from GoCatGo was somebody I intended to reach out to, but lucky for us, he made first contact and was completely on board. He is a very key player for KitTea in that he will be helping us decide on a layout for the cat oasis that will be most comfortable and beneficial to the cats. In addition, he will hold seminars for our patrons to help them better understand the mind of a cat and how to better interact with their cat, or any cat. 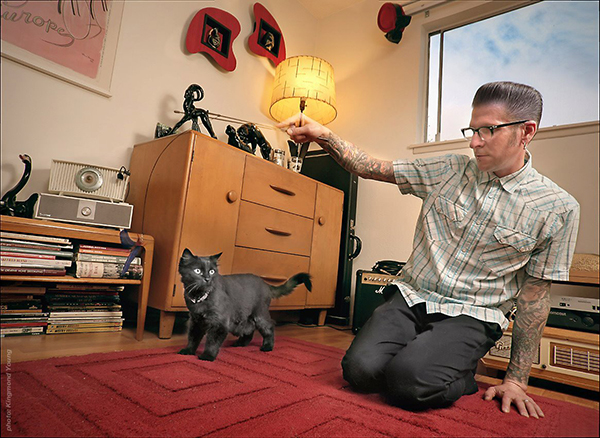 [Says Quagliozzi, also known as DQ, “When I heard that KitTea was opening, I was really excited about the prospects of San Francisco having a unique and creative venue for homeless cats — one that also gave back through education, awareness, and companionship (temporary or forever). KitTea is more than just a place to have a cup of tea and sit with cats. Basically, KitTea is a refuge for cats and cat people alike. Both are equally misunderstood and need a place to feel safe and at home.”]

Some people, even here in the “bubble” of the Bay Area, are bound to think a cat cafe is quite odd. Some might say it’s unhealthy for the cats. Others might tell you, “Get a real job.” What would you say to these folks?

We’ve been waiting to get slammed by an extreme animal activist, but it hasn’t happened yet. Everyone who is involved with the cat community understands that this is an incredibly advantageous concept for finding otherwise homeless cats forever homes in a responsible way. We just want KitTea to work well and be sustainable so we can keep it running. Last, KitTea will be a million times better than a lethal injection, or being cooped up in a shelter, which is very stressful on any animal.

Nobody has told me to get a real job. However, I did get a few raised eyebrows when I first began telling people what I was working on. As quoted by Bob Dylan, “the times they are a changin’,” and being innovative, slightly eccentric, and beneficial to the community is the new Starbucks. It also makes good material for the show Portlandia.

Do you hope to “convert” any people who have little experience with cats, or maybe teach new things to people who already have cats, or both?

Absolutely! This is where Daniel from GoCatGo will shine. I also hope to feature a seminar with a fabulous feline groomer, who will properly educate attendees about the safe and correct ways to groom your cat.

What can you tell me about co-founders David Braginksy and Benjamin Stingle?

He is my fiance and former venture capitalist. We met while founding and bootstrapping another Internet startup called Material.ly nearly three years ago. He’s been trying to stay in the background because he wants this to be my project — but he’s been doing a ton of work for us. 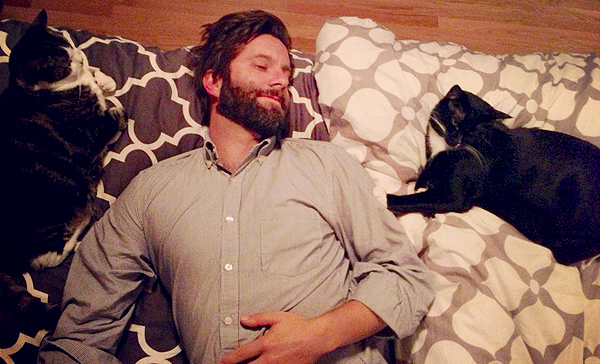 Benjamin has a cat nap.

I met David through a mutual friend and was informed that he was looking at starting a project where he could be involved with animals and their therapeutic benefits. 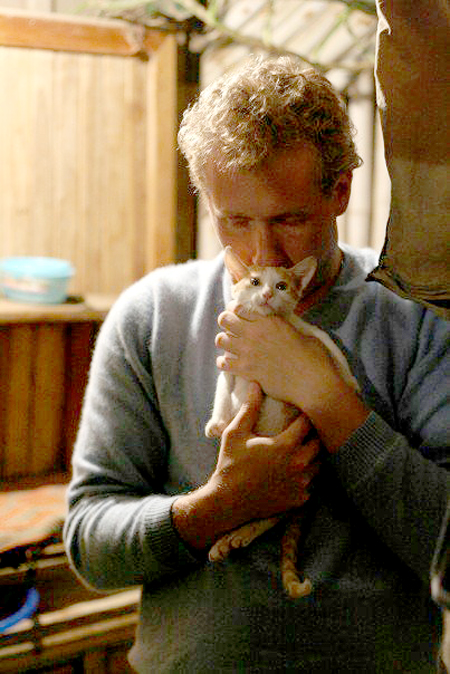 I should also mention that our community manager, Hannah Simon, is not only talented at what she does, but also reliable and clever. Her passion to get KitTea off the ground and expecting nothing in return is almost unheard of these days! She even has a full-time job. 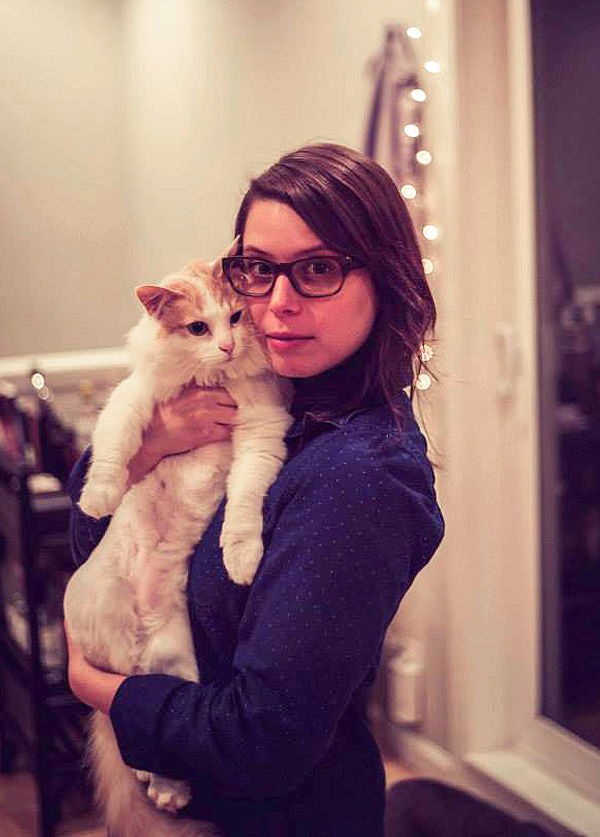 Hannah was the first person to reach out to us after our Facebook page launched. She and David are members of a “cat group” on Facebook. (Freaks! just kidding — I am also a member of the group.) Hannah’s skills are in community management, marketing, and strategic planning.

How many varieties of tea do you plan to feature? Do you plan to sell coffee as well, or any kinds of food or other beverages?

We will not be serving coffee, at least in the beginning. We are committed to focusing on high quality blends of tea. We plan to have a diverse variety of teas, especially loose blends. As for food, we will sell foods that are prepared off-site from high-quality and local vendors.

That’s it for today. Check back for the second part as well as updates on the KitTea crowdfunding campaign. Meanwhile, tell us about your experiences in or thoughts about cat cafes. Have you been to any? What did you think? Would you visit one if you could? Are you planning to open one? Tell me in the comments.

Cat Dandy prefers his introspection with a side of extrovert, so he loves to sit in cafes: