Next on The Scoop: Win a Neater Scooper to Better Clean Your Cat’s Litter Box
Ask A Behaviorist

Cat Behavior: How to Stop the Violence of a Cat Fight

Cat lovers know the feelings of helplessness and dread when their cats violently battle with each other. It is easy for owners to react in the moment and make serious mistakes, escalating the wars or becoming painfully injured. In an attempt to stop the violence, often pet parents wade into the middle of the battle intent on separating the cats with their hands or bodies. It usually doesn’t go well — instead of stopping the fighting, they often end up with serious cat bites. Other common reactions to the brawls are yelling, chasing, or punishing the combatants. Instead of defusing the situation, these tactics add fuel to the fire — frightening and stressing the cats and sometimes causing them to fear their people. 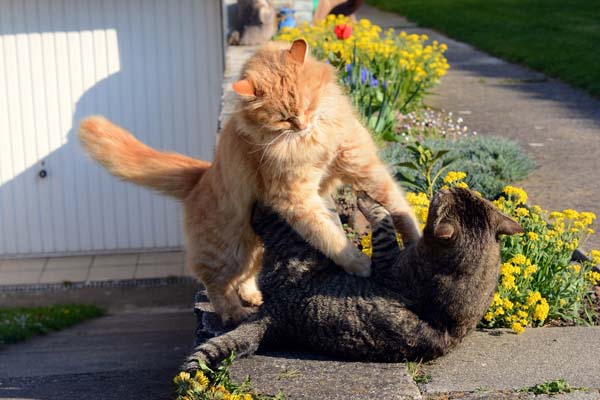 Some people believe in non-action. Their philosophy is to let the cats fight it out. This isn’t ideal either. In addition to inflicting serious injury on each other, cats who “fight it out” often become sworn enemies, gunning for each other at every opportunity.

These tactics are not recommended, but there are others that will end hostilities before they begin, as well as some that will stop them in the moment.

Stop the war before it starts

The most effective and safest way to stop a fight is to not let it begin. Here are six tips that will help end the fighting before it starts:

In the real world it isn’t always possible to avoid conflict. Instead of risking life and limb, punishing the cats, or doing nothing, try the following:

After battling cats are separated, they need to have a cooling-off period away from each other and the other household residents. It can take a few hours, a day, or longer for cats to calm down. After they have cooled down, they may have to be gradually reintroduced to each other.

She;is also an award winning author. Her book Naughty No More! focuses on solving cat behavior problems through clicker training and other force-free methods. Marilyn is big on educationÔÇöshe feels it is important for cat parents to know the reasons behind their cat’s behaviors. She is a frequent guest on television and radio, answering cat behavior questions and helping people understand their cats.