Next on The Scoop: Do You Give Your Cats Fancy Nicknames?

Becket is the personal assistant to the gothic fiction maven Anne Rice, along with being an author and musician in his own right. On a day-to-day basis he’s comfortable dwelling in a fantasy world where goblin queens and steampunk vampires galavant against a backdrop peppered with necropolis castles and dusky vistas. He’s also a confirmed feline fancier and grew up in a household that at one point counted 15 kittens among its ranks; it’s his adoration of cats that brings him into Catster’s realm.

The influence of growing up in a cat-centric home has stayed with Becket to this day; he now calls on two cats, Smaug and Hobbit, for company. Deciding to buck his family’s history of adopting from shelters, Becket indulged his passion towards British Shorthairs and their “distinct mien” and snapped up Smaug a year and a half ago. Hobbit followed six months later, and the two have bonded wonderfully, as you can see by perusing their shenanigans over at Becket’s Instagram outlet.

Communicating via the magical wonders of email, I asked Becket how he deals with the eternal issue of cats attempting to get in the way of a computer, how Smaug and Hobbit get along with Anne Rice’s furballs, and exactly how he’d go about turning the duo’s daily feline adventures into a fantasy frolic. 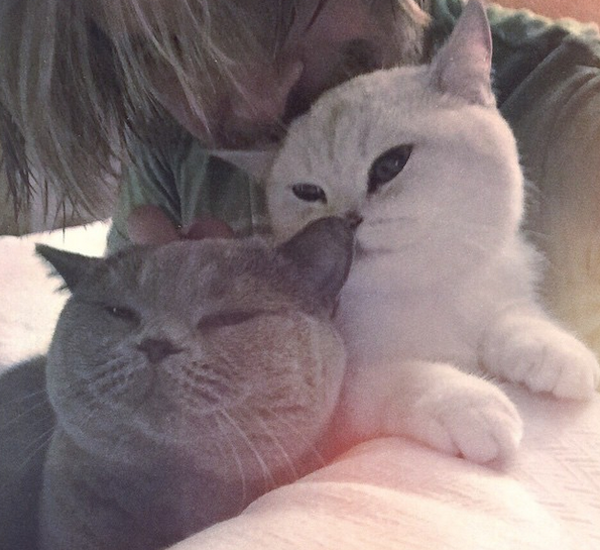 Catster: How would you describe Smaug and Hobbit’s personalities?

Becket: Their personalities are night and day. Smaug is a tentative snuggler while Hobbit literally throws himself into my arms. She is very introverted and independent, although when she is around people she likes she is very affectionate — and by affectionate, I mean she allows them to pet her. She loves to play right after I feed her in the morning and she loves to lie on my lap at night when I read a book before bed or watch an episode of something on television. She also has a hiding place in my closet where she will sleep during the morning, while in the afternoon she sits before a window and watches the birds in the backyard.

Hobbit, on the other paw, is extroverted and hates being alone. He sleeps right after he eats in the morning, and then is energetic all day long wanting to play games, and then he crashes in the late afternoon. But at night, like Smaug, he has another spot on my lap where he curls up beside her while I read, watch TV, and sip tea. 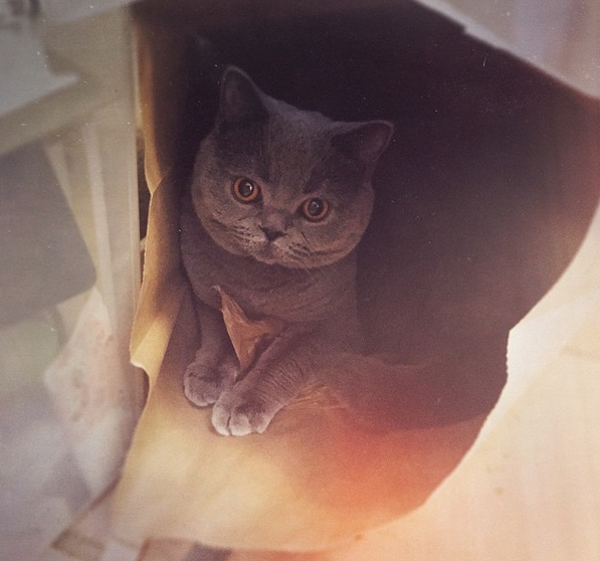 I’m assuming Smaug is named after the dragon in Tolkien’s Lord of the Rings. How do you think Smaug the cat would get along with Smaug the dragon?

She would utterly annihilate him. There’s no competition. 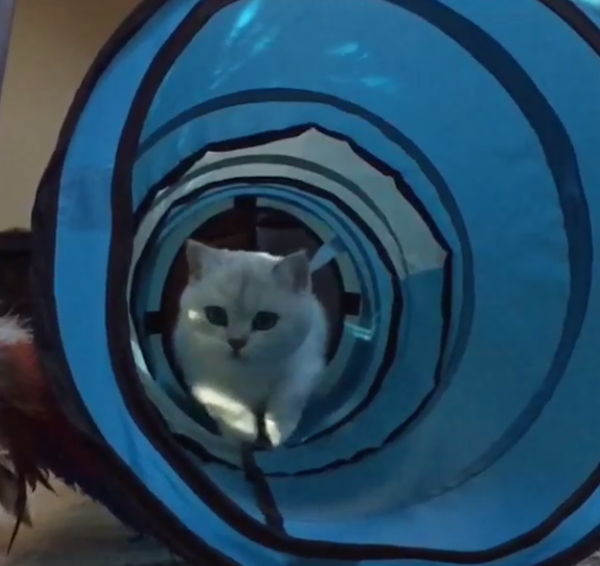 Looking at your Instagram account, both Smaug and Hobbit seem to really enjoy playing with the blue cat tunnel. If you were to write a story about them, what sort of world would be on the other side of the magic blue tunnel portal?

Both of them love that cat tunnel. My motto is: If I would like to play inside it, I’ll get it for them. But I have often found that the toys they like the most are the ones that cost the least, like sheets of tinfoil wadded into a ball which they will bat around for an hour.

So about the blue cat tunnel, the story, I think, would not be what’s on the other side but what’s on the outside. The suspense for them — which drives the narrative of their playtime — is when they lie inside it and I press something against the tunnel’s outside. Which they bat at with incredible vigor! So it would be a story driven by the question: What’s that outside? 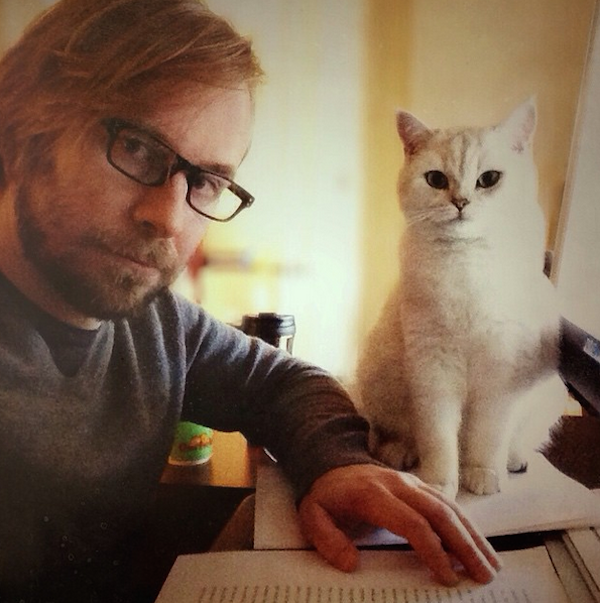 I’ve also noticed pictures of the cats attempting to get in between you and your computer while you’re writing. What’s your most effective tactic in dealing with an attention-seeking cat while trying to work?

Smaug does not like to be picked up and held, so when she is trying to get my attention she usually wants me to play with her. The unique distinction between the way she plays (which Hobbit does not like) is for me to chase her. She meows at me until I get up and chase her around the house, then I hide behind a corner and she comes to chase after me, bouncing the way cats do playfully. After that, I come out and chase her again. We’ve been doing this since she was a kitten. 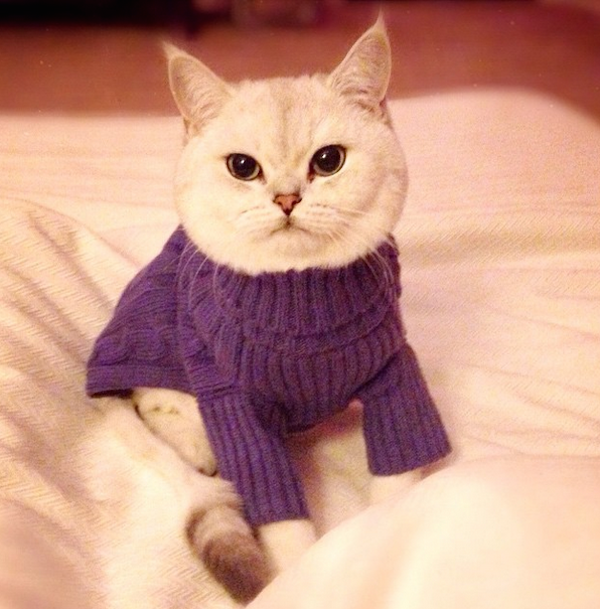 But Hobbit is a typical boy and full of fears. He hates it when I chase him, but he loves many other games that Smaug does not care for. Still, when I am working, and he is meowing loudly by my ankles, he generally wants me to pick him up and stroke him while I work. That is usually when I cease typing and begin dictating my books, so I can hold him in one hand, stroke him with the other, and dictate into my microphone — kind of like what’s happening now. (Say hi, Hobbit!) 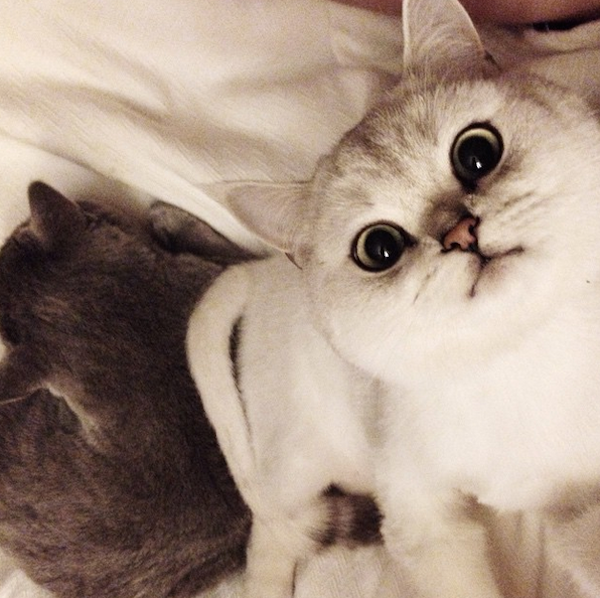 Anne Rice is also a cat fanatic. Have your cats ever met her cats?

This question made me laugh because, yes, they have met Anne’s cats. Smaug spent the most time with them before Hobbit came along. It happened when I had to go out of town with Anne last year for about a week and I decided to leave Smaug in the care of Anne’s sister, Karen, who stayed in Anne’s house and took care of her cats. Karen is a natural caregiver with animals, especially cats. She is the true cat whisperer.

But when I returned a week later to retrieve my dearest Smaug, I learned that she spent many long hours with Anne’s rather matronly cat, Meribelle, who has never forgotten that her ancestors were worshiped in ancient Egypt — and will never let you forget that fact, either. Smaug took something of that attitude with her after that visit. Now she absolutely demands the royal treatment, while Hobbit will one day grow into the feline version of Homer Simpson. 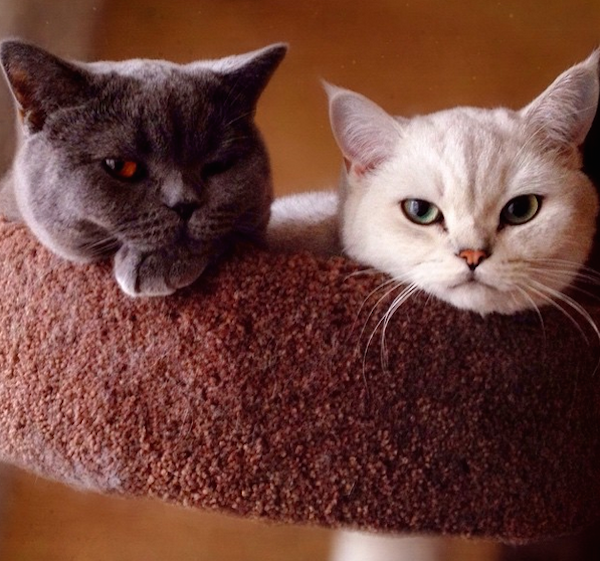 What’s your favorite Anne Rice book? And if it were to be rewritten with a cat in the starring role, what sort of plot twists would take place?

I have to admit that, although I grew up on Anne’s vampire literature, my favorite book of hers is actually the book she claims to be her favorite too, which is Christ the Lord: The Road to Cana — because I was there for the copious amounts of research that went into it, and I love the way her prose imitates the simple, stark prose of much biblical literature, as well as other literature revolving around first century Palestine. Now, I am not sure if I could actually see a cat in this starring role — not because I doubt that cats lack any divine qualities, but because I believe that the inherently solipsistic nature of most feline creatures fundamentally removes them from any messianic role. In other words, cats would take one look at the human race and say, “Save yourselves, you bunch of lunkheads.”

Thanks for the interview, Becket! To learn more about him, head over to his website, Facebook, and Instagram pages to keep up to date with his latest projects, which at the moment include three new installments of his The Blood Vivicanti series of books and his second album, which he describes as “like orchestral trance music.”

Read more about celebrities and celebrity cats on Catster: