Next on The Scoop: 6 Gifts That Cats Would Request in Their Letters to Santa Claus
Vid We Love

Every year for three decades the San Francisco SPCA has partnered with stores downtown to promote adoption around the holidays, and the flagship Macy’s store near Union Square has been a steady partner since 2004. Recently unveiled was the SPCA’s Holiday Windows program, which places adoptable cats and dogs in temperature-regulated displays to greet holiday shoppers.

This year the program, which in recent years has found homes for some 300 new pets each year, is visible via live video stream on the 30th Anniversary Holiday Windows website. Scroll down until you see “Live Feed,” and you can maximize any of three windows to see puppies and kittens being showered with adoration from people on the street. 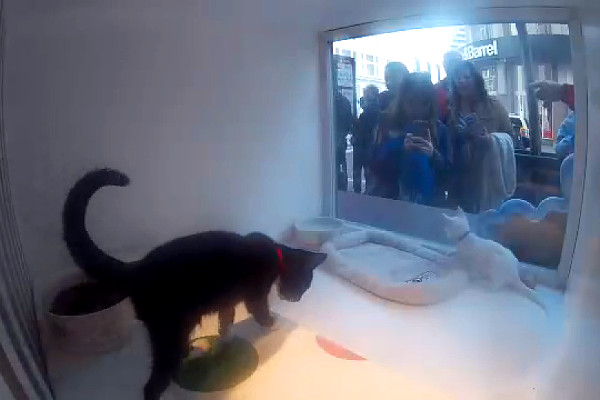 The displays over the course of 30 years have helped more than 8,800 animals find homes.

If you live near enough to San Francisco, you can stop by to watch the critters, and even if you’re not ready to adopt you can donate. Last year, more than $88,000 was raised for the SF SPCA’s life-saving programs.

The windows are themed in line with Macy’s “Believe” campaign this year. The Holiday Windows will continue until Jan. 1. The windows are sponsored by Purina One, Tidy Cats, Obe Bowls, and Zoetis.