Next on The Scoop: Meet the Stray Cats Who Live in Nelson Mandela’s Former Jail
Confessions

A Tribute to Mr. Jazz, My Beloved 15-Year-Old Ragdoll Cat

Editor’s note: This post originally ran on Deb’s site, The Chronicles of Zee and Zoey, but we’re running it here with her permission because it’s lovely.

The thing with inevitability is that no matter how many wishes upon a star, you cannot stop what is meant to be, and I now find myself, a born writer, in stunned silence with no words to adequately convey both the crushing loss yet the sobering relief of letting my beloved Ragdoll cat, Mr. Jazz (aka Jazz), finally pass to his place on the Rainbow Bridge.

On the surface you might not have even known it, but upon closer inspection, every nook and cranny looked like a cat infirmary at my house. Pill bottles, syringes, pee pads, disinfecting wash, special cat foods, pain medication, blankets in every corner, and more. But, the fact is, after a litany of blood tests, X-rays and endless examinations with no conclusive evidence in sight, and despite the mountains of cat paraphernalia dedicated to prolonging the life of my beautiful 15-year-old boy, he was dying. 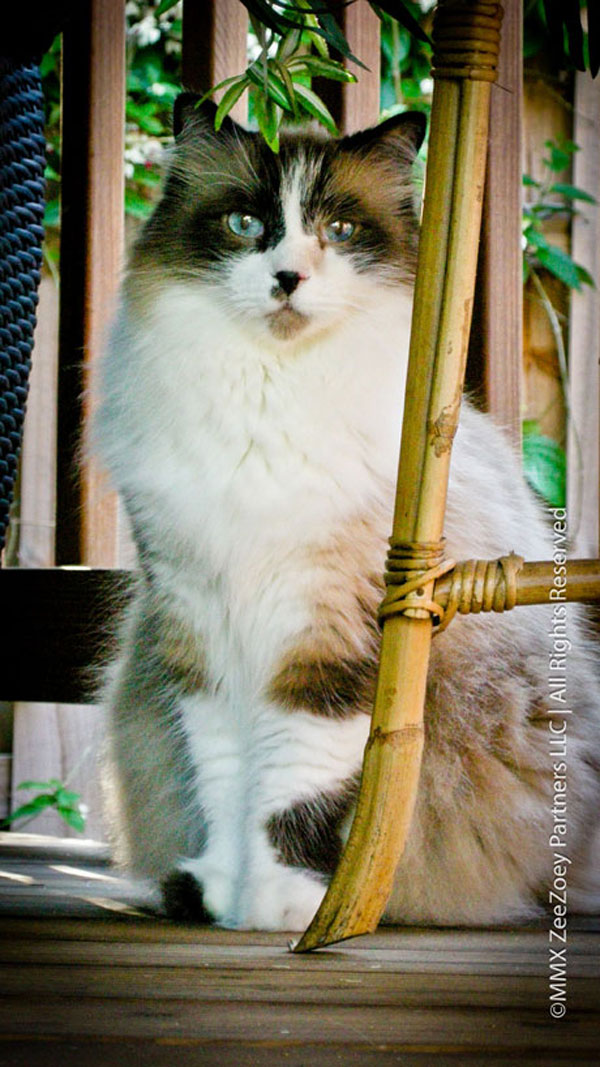 I made it my mission, along with my fianc├®, Dan, as if somehow our love and perseverance could will him back to his original healthy body weight and his younger days of life. We had regular injections of fluids in his body, pills to stimulate his appetite, and, of course, our desperate and obsessive efforts to find something to entice him to eat, such as baby food, chicken broth, liver, cheese, specialty cat milks, turkey breast, tuna, and every and any brand of cat food on the market. He wanted none of it, to the point he was losing weight at such alarming levels that we were forced to bring him back to the vet to be taught how to force-feed him with a syringe to bulk up his weight.

You would think that one frail cat versus one very stubborn and determined human would be an easy victory for the human, but Jazz became angry, depressed, and so desperate to get away from me that he would run and hide every time he saw me. I remained diligent, but the eating victories were few and far between.

This battle went on for weeks until one morning when I was getting ready for work and noticed a big bubble protruding from his throat. I woke Dan up in a complete panic, certain my time with Jazz would be reduced to minutes, and we rushed him to the vet. She calmly drained the protrusion and broke the news that no pet parent ever wants to hear, “You will need to make a decision very soon, as we don’t want to see a cat needlessly suffering.”

Dan and I brought Jazz home and made a promise to one another: Above all else, and despite how hard the decision would be, Jazz deserved his dignity and we were not going to subject him to further tests, feeding tubes, pills, syringes, or anything else. We were going to love him as much as we could and enjoy whatever time with him we would be blessed to have.

That being said, it was like a mini-miracle was given to us. Jazz seemed to intuitively know it was up to him and he began to eat on his own, to the point he was asking for “snacks” all day and night long, which we happily obliged. I was cautiously overjoyed. 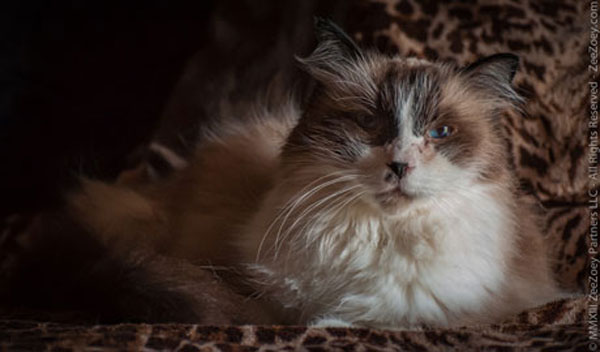 We were given three more glorious months with Jazz, who also seemed to sense the finality of time. He would drape his body on mine like days of old, and give me a bear hug as if to reassure me that he knew every day he had with us was a precious gift on loan. Dan and I lavished him with kind words, love, and extra petting, and for a brief moment, time just stood still for us all.

That was, until everything began to change and we knew it was over. Jazz became incontinent and would take to slumbering for extended periods in very odd places. He was having trouble walking and took what would be his last bite of solid food, and no amount of pleading, begging, crying, or cajoling would get him to eat. He began to nest and I knew he was trying to find his final resting place. 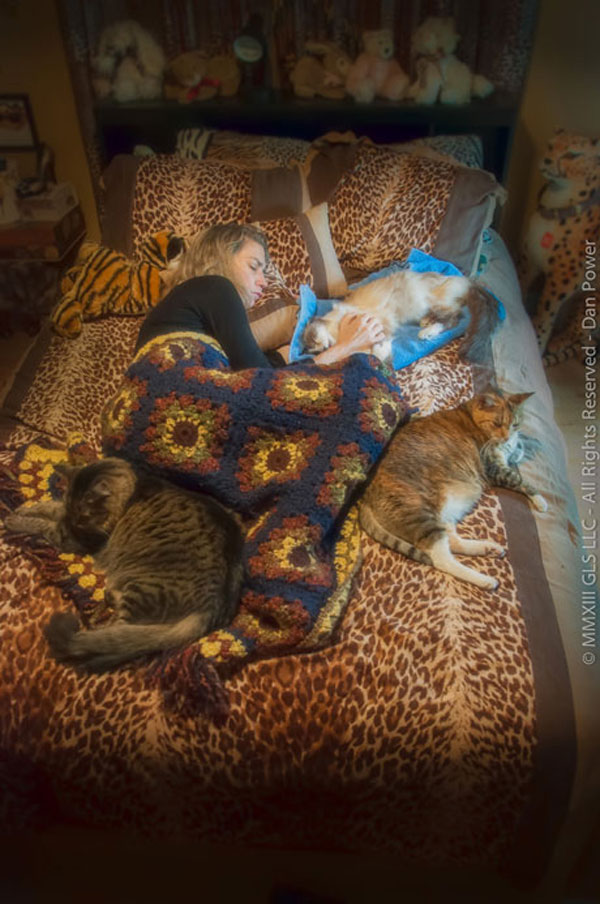 I put comfortable blankets all over the house for him to lie on — jumping on the couch or bed was no longer an option. I spent an entire week lying by his side at night, petting him and talking to him, until I knew he wanted me to leave him alone so he could wander off without me watching him find a place to sleep through the night. He sensed that our time together at night was important, and so did one of our other cats, Harley, who came to lie on the blanket next to us one night when Jazz was laboring to get comfortable. I tried to shoo her away, but she got vocally agitated with me and pressed the warm girth of her body into his. I realized she was offering him her comfort and I let her stay with us until I went to bed.

This was always the hardest part for me ÔÇô- wanting to be next to him, but knowing that eventually I would have to leave him and go to bed because he did not want me by his side all night. One night was particularly difficult for him and I went to bed paralyzed with fear. 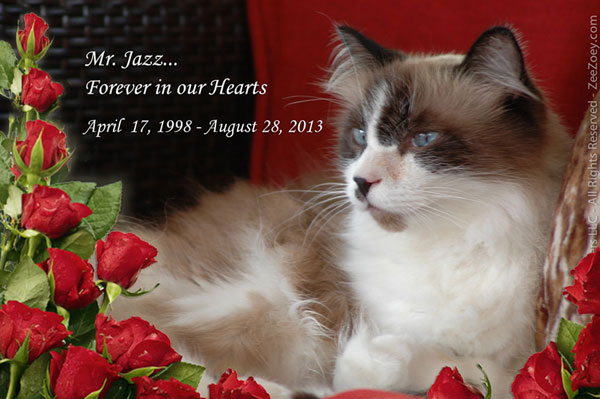 The moment I woke up, as I did every morning, I instantly looked for him, but this time I could not find him. I searched for over an hour and finally woke Dan to help me. He found Jazz under the TV stand. He hugged me and with a heavy heart told me Jazz was no longer in pain and was gone.

As Dan and I held one another, one of our other cats, Peanut, was on the floor looking at the spot where Jazz was, imploring Dan to look again. He then told me, “Deb, Jazz is still with us.” He was barely breathing and could not lift his head. We had prayed he would pass peacefully in the night, but for whatever reason, we were given the precious gift of being able to share his final moments with us.

Dan picked Jazz up and put him on a towel and brought him into the guest bedroom, where I laid down next to him on the bed. I grabbed a blanket and wrapped myself around him to offer soothing words of love and to pet his head as gently as I could. Cats Kizmet and Harley lay at my feet and all of us spent the entire morning with Jazz. We did not move an inch until it was time to go. Dan had made the appointment for the afternoon — we knew the final gift we had to give Jazz was finding the grace, beauty, and dignity of letting him go.

At Dan’s suggestion, we placed Jazz in a beautiful wicker basket to carry him to the vet. It fit his body perfectly and he looked so peaceful resting in it.

Once we got there, our vet talked to us for a few minutes and then she dimmed the lights. It was actually quite beautiful and serene. Dan and I held one another as we comforted Jazz in his final minutes, and we left with the knowledge that he was so very loved and cherished and that he did not have to suffer any more.

It obviously hurts deeply that we had to make that choice, but we knew it was the right one, because when it comes to pets, despite the wish to never have to let them physically go, one has to be gently reminded it is about the quality of their life, not the quantity of years, that it needs to be measured by.