Next on The Scoop: Let’s Talk: Does Your Cat Share Your Interests?
Confessions

I Take My Cats Shopping for Treats at the Pet Store

Picture me walking two cats on leashes down the treats aisle, one with a pig's snout in her mouth.

Really, it is a shame that most folks are not used to seeing cats stroll about on leashes, accompanying with grace and style the humans who serve them. It’s a shame because sometimes I have to remind people to pick their jaws up off the ground when one of my leash-trained Abyssinians or Bengals trots past them during a shopping excursion.

I breed Abyssinians as a hobby, exhibit them competitively in cat shows, and train them to perform various behaviors, otherwise known as "tricks" — such as rolling over on command, jumping through hoops, and responding to hand or voice signals to jump, sit, or turn. Along with the Abys, I have two pet Bengals, and that combination enlivens my life and (depending on how I look at it) either keeps me young or contributes to the increasing ratio of white to brown hair on my head. 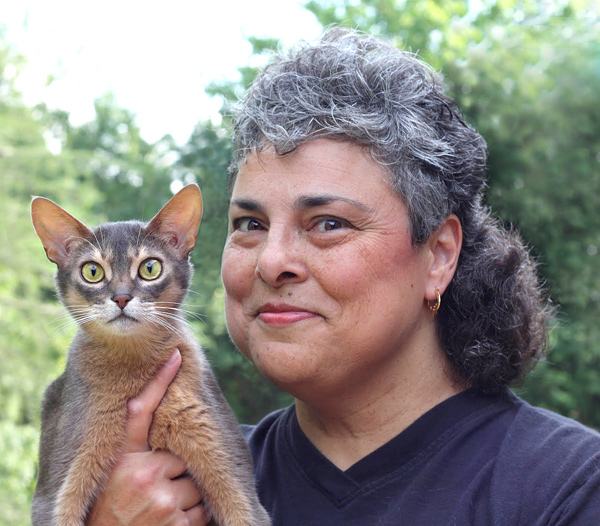 My cats perform at trade shows and cat shows, and do television commercials, but ultimately, my cats are my pets, and each one of them is harness and leash trained when they are kittens. That training makes each cat much more portable, and often a very good shopping and travel partner.

One time I took one of my Bengals, Callie, along when shopping for a new car. She perched upright on my shoulder for the entire outing. I believe I was able to negotiate a better deal because she unwaveringly stared down at the salesman, furrowing her feline brow at just the right times, making him uncomfortable enough that he decided to forgo any attempt to upsell me rust proofing, extended warranties, fabric coatings, or a 20-speaker sound system. 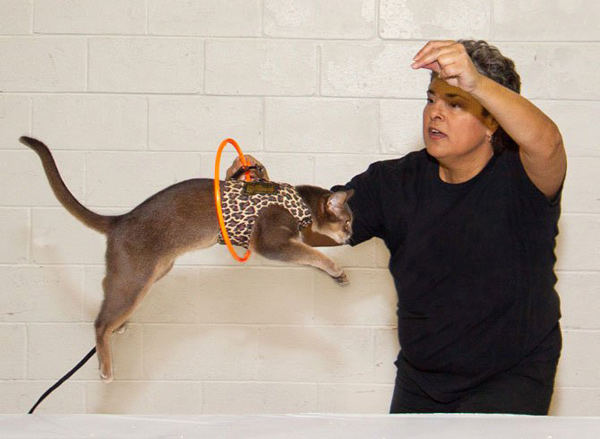 Never underestimate the power of a cat to be a most serious shopper, but I do suggest that some vigilance be exercised when a shopping trip is more feline focused than the new car showroom.

I enjoy browsing in pet stores with my cats in tow, though it always reminds me of how much merchandise in these stores is marketed to the dog-owning public. All sorts of toys, bowls, leashes, and other canine devices crowd the aisles. Cats and their owners (who now outnumber dogs and their owners) get short shrift. Nowhere is this more apparent than in the snack section, as Abyssinian Twyla Mooner, Bengal Callie Mooner, and I found out during one visit to a huge pet supply warehouse. 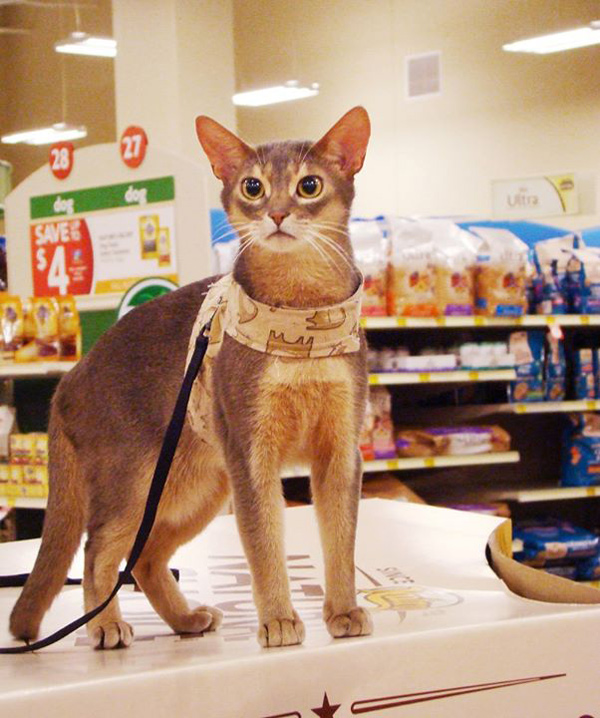 We were greeted at the door with large overflowing bins containing a variety of biscuits and treats. Some of these bins contained various identifiable animal body parts sold as snack items. Large signs proclaimed "Hooves: 50 cents," "Ears: 3 for $2.50," and my favorite, "EXTRA LARGE SNOUTS!" I was intrigued by the offerings, and upon closer inspection I noticed that most of these items appeared "donated" by members of the porcine community and were available in either smoked or "natural" flavors. (I’ve never quite learned what exactly dogs do with those hollow hooves. Do they chew them? Are they to be stuffed like bell peppers? Are hooves purchased singularly or in a "hoof-pack"? Most importantly, where does a hoof fall in the canine food pyramid?) 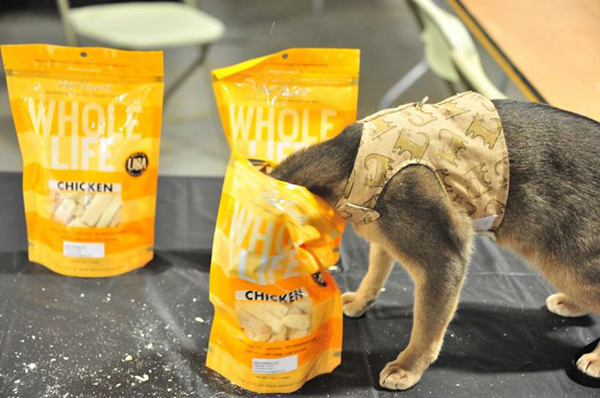 My cats had never seen or smelled anything like this display and immediately started exploring the bins. Twyla was quick to rout around in a box piled with very small rawhide chew toys shaped as animals. She grabbed one and started savoring it. I looked closely and realized that — egad — she had chosen one shaped like a CAT! 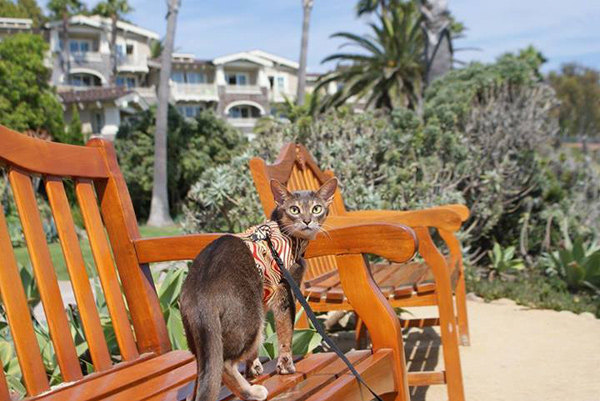 In a flash, I removed it from her mouth, emphasizing to her that this was akin to cannibalism, and replaced it with another chew toy vaguely resembling a Schnauzer. Twyla spurned the Schnauzer and dove back into the pile to retrieve the previously gnawed cat. She pulled out the feline-shaped chew toy and clamped down on it with a growl and a snort. Of course, I found this disturbing, though I hoped my pleas of reason to Twyla were not raising eyebrows among the shoppers within earshot over in the kibble section. 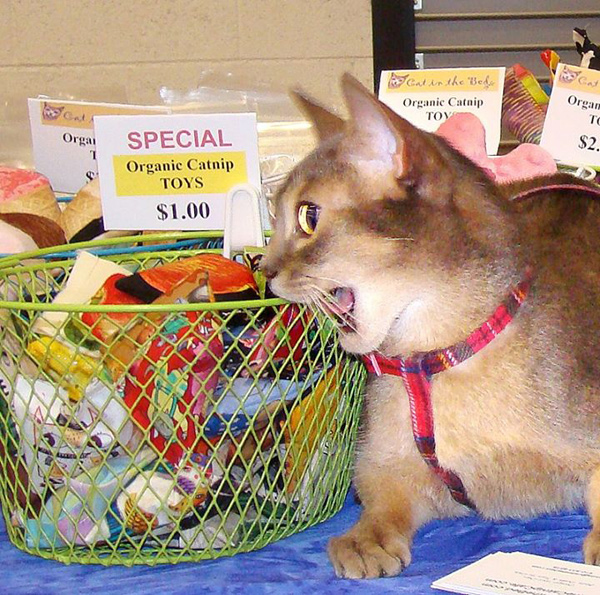 Meanwhile, Callie had pulled out one of the "EXTRA LARGE SNOUTS!" and was contemplating the logistics of navigating the aisles with a pig’s nose twice the size of her head clutched between her jaws. It was quite clear that once she had it in her grasp she was not going to let it go. I was just hoping the cashier would not need me to remove it from her well-pointed teeth in order to scan it. I would have insisted the cashier scan the cat and the item she was clamped onto as a unit rather than have me attempt "snoutus interruptus" on this Bengal. After all, I value my opposable thumbs. 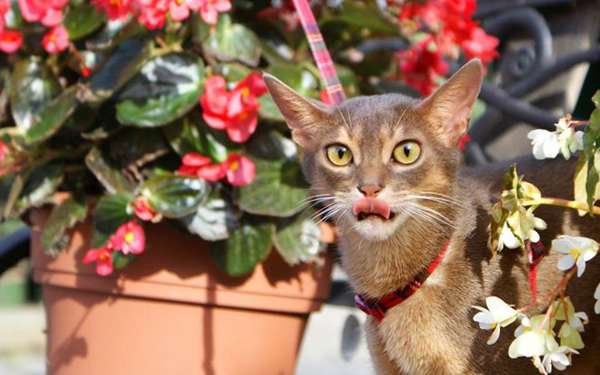 My cats found this shopping adventure agreeable, sort of a suburban domestic feline version of wandering the African savannah in search of prey, albeit prepackaged fully prepared prey. And that’s how our visit proceeded, with me escorting two leashed pedigreed felines, neither weighing more than seven pounds, one toting a cat-shaped doggy chew toy and the other dragging a huge pork snout, down the aisles of the pet store.

Fellow shoppers stopped in their tracks, their small, confused dogs meeting the furtive glances of my two determined felines. At least Twyla and Callie had the sense to make a beeline for the express checkout and insist I pay with cash.

After walking out of the store with my cats in my arms and their "captures" dangling from their jaws, I felt a bit of a letdown, as if — at least for a moment — feline evolution had severely reverted. Probably somewhere between the hoof and snout aisles.

Read more on cats and leashes:

About the author: Lisa-Maria Padilla, a Los Angeles native, lives in the Washington, DC suburbs, where she breeds, shows, and trains Abyssinian cats for performance, trade show, and TV work. When not herding her Abyssinian and Bengal pets, Padilla writes feline humor stories and articles. Racy Mooner, one of her very spoiled performance Abys, posts her own insightful feline view of life and human failings on her Facebook page.