Next on The Scoop: 8 Valentine’s Day Candy Hearts as Translated by Cats
Confessions

I Want to TNR My Feral Cat, But I Fear I’ll Lose His Trust

I know trap-neuter-return and vaccination is right for Zorro, but I don't want to risk our tenuous trust.

I’ve written at Catster about Zorro, the stray or feral cat who showed up here last fall. Zorro (named appropriately by a reader at Catster — thank you!!) has been living in our garage since November. He has survived one of the most brutally long and cold winters we had for as long as I can remember. (I heard that this northern Minnesota winter was the third coldest on record.)

Personally, I do feel like a wimp — I remember colder winters when I was a kid. But Zorro is a cat and much smaller than me. I am amazed at his ability to survive. I used to poo-poo the suggestion that a cat could survive these winters if they had good shelter, but in Zorro’s case, it seems to be true.

Zorro looks like a Ragdoll breed and has a stocky build and long, thick fur. I am assuming he’s an intact boy. I know that the right thing to do is to trap him, neuter if needed, and vaccinate him. A vet two miles away has a live trap I can borrow. And I’m hesitating. We have established a tenuous trust, and I don’t want to break it. 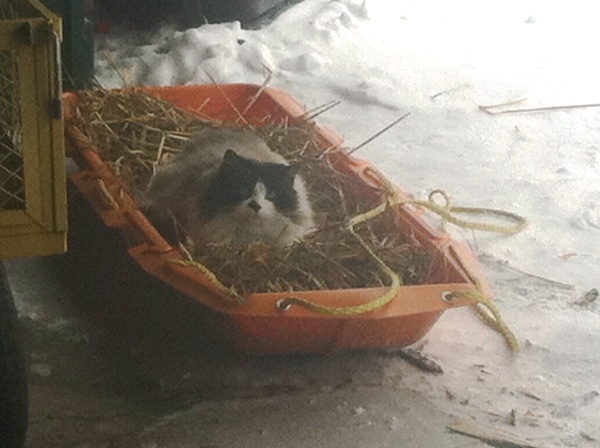 Zorro and I have built an interesting relationship. I talk to him and call him by name whenever I am in the garage. The closest I’ve come to him is a few feet. He runs from me less, and less quickly. Often, he doesn’t run, but will watch me as I watch him. We can look at each other forever. And when we do gaze at each other for minutes, his blue eyes are not dilated. I am assuming that he is not afraid. I’ve not ever been able to get close enough to touch him. 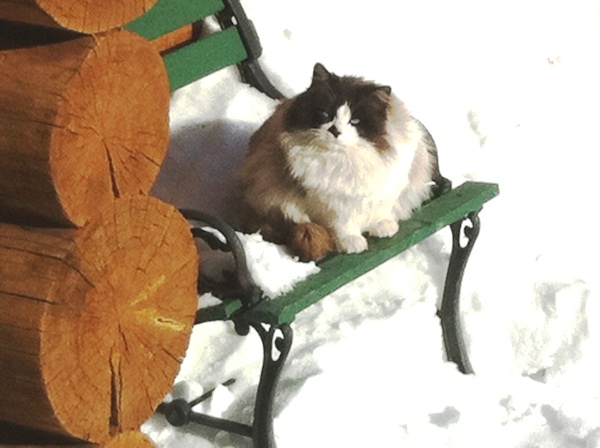 Zorro is also a very cautious cat. I work at home so I am pretty easily able to observe his habits. During this winter he has more often than not stayed in the garage. He is well and not injured, and he does not appear to have frostbite. Zorro sleeps in a straw bed in the back of the garage. I made him a feral shelter that I’m pretty sure he has never used. Instead, he snuggles in straw that we shoved in a large circular rubber tub. I see him there often when I go out to feed him or just to say hello. He generally doesn’t run. 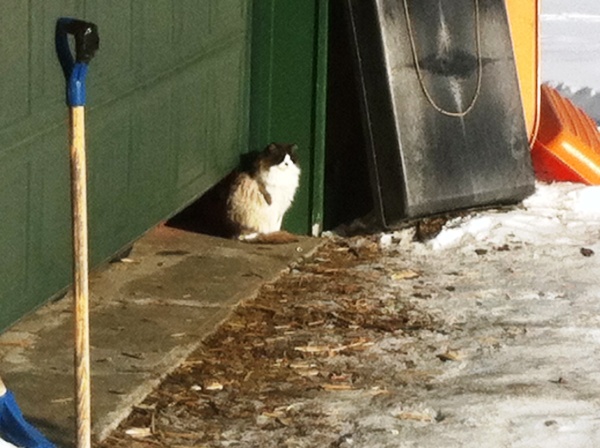 We noticed that Zorro liked to go out in the sunlight, even on pretty cold days. My husband had the good idea to fill a sled we have with straw so that Zorro could lay out in the sun and not have to sit in the cold snow. Zorro took to it instantly. If it’s really cold, the sled is in the garage near the door, so that Zorro can still get some sun. The garage is not heated, and we always leave the door open just a little so that he can come and go. I think he mostly goes at night, but I don’t think he’s gone far. We’ve found his paw prints in the snow.

There have been many times I’ve been really tempted to completely shut the garage door at night (only if I’m sure he’s IN the garage, of course), but again, I don’t want to violate his trust. We had another feral cat here once and I did shut the garage door. The next morning I heard him meowing, opened the door, and we never saw him again.

So I am faced with this predicament. This is the second stray/feral I’ve ever cared for, and he’s much more cautious than the first boy. I worry that I’ll drive him away if I set up a trap. I’m not sure I’ll be successfully able to trap him. I’m wondering if I should wait until it gets a little warmer. If it’s warmer, I reason, and he’s freaked by the trap and runs away, at least he won’t be dealing with these awful temps. We are way out in the country, and there’s not too much close by for shelter. Homes are far apart. I’m not sure if my concerns are founded.

So experienced readers, what would you do? Set the trap up now? Wait until spring or at least for the temps to stay regularly in the 20s and 30s above zero? I need to figure this out, soon.

Previously I heard from so many of you about Zorro, and I really appreciated it! Please share your thoughts in comments. Thank you so much.