Next on The Scoop: Ask Einstein: How Do You Bottle-Feed an Orphan Kitten?
Let's Talk

Do Your Cats Get Spring Fever?

It’s official. Spring has arrived! According to my official 2014 desk calendar, spring was actually supposed to start a few weeks ago. However, the winter season decided to extend itself by sharing freezing rain and below freezing nightly temperatures for a few extra weeks here in the South. The flowers and bulbs were still not making an appearance. Even my cats stayed inside more to take advantage of our warm garage and their heated beds.

Then, out of nowhere this week, spring finally arrived. The flowers are now in full bloom, the bees, wasps and other crawling creatures have seemingly come out of the woodwork, and our cars have a modest yellow dusting of pollen on them. Even my cats have shown signs of being more playful and enjoying life. 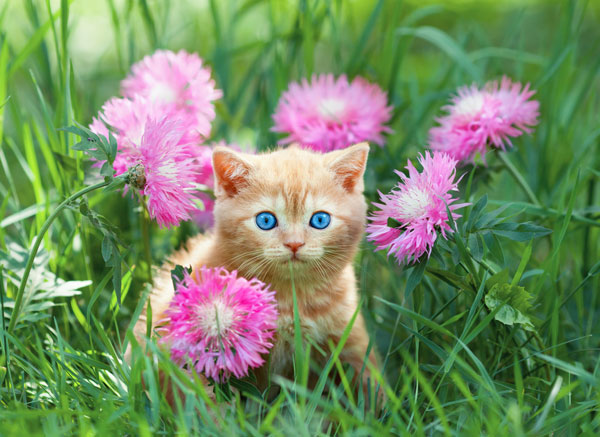 I think everyone enjoys the first signs of spring. Outside of the increased sneezing from allergy attacks, I know I do. It’s time to start the spring projects around the house, clean up dead plants and dust bunnies that have piled up during the winter, and start fresh again. It’s a time to plant new flowers and plants and break out the short-sleeve shirts and shorts.

Yes, everyone enjoys spring but no one enjoys it more than my cats. They seem to go crazy when warm weather finally arrives. They start to spend more time outdoors sunbathing and grooming. They spend more time exploring the areas around the house. They like to investigate all the planters that have made their way out of the garage and onto the front porch. They even find it hard to resist all the flying, crawling and buzzing creatures that have suddenly made their appearances after several months of being dormant. 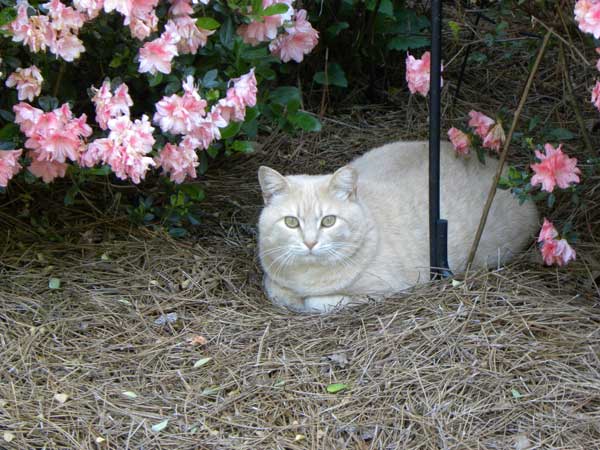 My girl, Momma Kitty, has changed her routine from spending long hours sleeping in her heated bed in our garage to spending the night in our driveway under the stars. She’s a very smart kitty and never leaves our property. However, last night she spent the majority of the evening lying under the new gas lamps that were just installed at the end of our driveway. This is an area that she’s never frequented before.

It worried me that she was choosing to spend time so far away from the main house and much too close to the road. I knelt down and chatted with her about my desire for her to move back closer to the house where it was safer. She was waiting for the other cats to arrive and wanted to greet them, but she understood that it was safer for her to be close to the house. So she obliged my request and walked back toward the house to wait for the others to arrive. Ah, the joys and benefits of being able to communicate with animals! It definitely comes in handy at times like these. 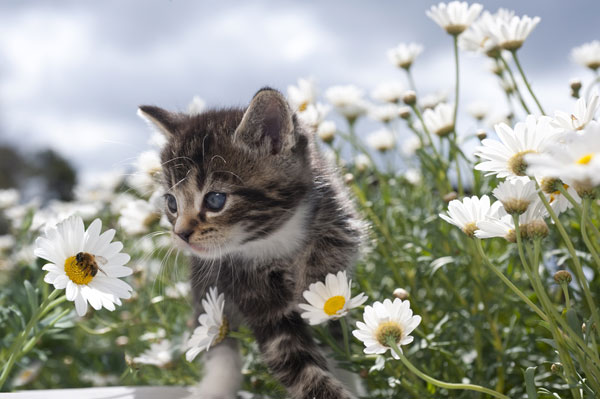 My boy, Rusty, has been particularly crazy and doing things out of the norm. Usually, he will let me pet him while he’s eating. But, since spring has arrived, he’s more interested in eating quickly so he can go back outside and play with the large Carpenter bees that fly around the area. He loves to chase them since they fly lower to the ground and like to build nests in the wooden railing and fence that surround our house. They are slower than some of the other creatures, so every once in a while he will catch up with one, knock it to the ground and begin batting it around. Fortunately, he quickly loses interest and will head off to catch another. Thankfully, he doesn’t kill the bees. He just thinks they’re entertaining to play with. 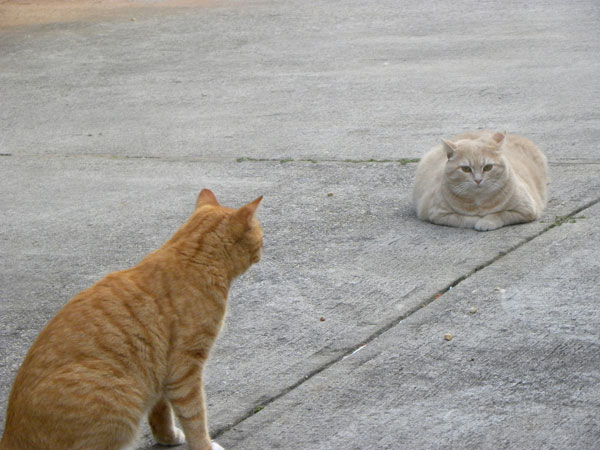 Rusty is also a little more of a pest with the girls who are part of his family. He’s not as interested in procreating with them, since he’s neutered. He just likes to tease them. He runs after them and chases them to the top of the fence posts in our yard. Once they’re up there, he leaves them alone and heads over to chase next girl. He will find his next victim and either chase her or come running toward her, with his tail pointed straight up, in order to give her an extra strong head butt to her body. It’s his way of showing the other kitties his affection.

In the spring, my cats remind me of children being dropped off at home by the school bus. They come running toward the house, screaming as loud as they can and waving their hands in the air with wild abandon. The children know that it’s now time to play in the warm spring air, and my cats feel the same way.

Do your cats act crazy when spring arrives? Share your stories in the comments.

Check out these other great articles on Catster:

About Tim Link: All-American guy who loves to rock out to Queen while consuming pizza and Pinot Noir and prefers to associate with open-minded people who love all critters. Considers himself to be the literal voice for all animals. Author, writer, radio host, Reiki Master, Animal Communicator and consultant at Wagging Tales.