Next on The Scoop: Watch a Big Cat Pounce — Just Like a Little Cat
Confessions

Was she abandoned? Lost in a move? No matter -- this little cat was coming home with me.

“It’s a good thing you’re cuter than you are dumb.”

That was among the playful things my then-girlfriend, Daphne, and I often said to Tiger Lily, a cat who wasn’t very smart but who more than made up for it with her adorable nature and the amount of love she gave. We met Tiger Lily in early 2001 underneath our apartment building in Alameda, California, and she made quite an impression on us. 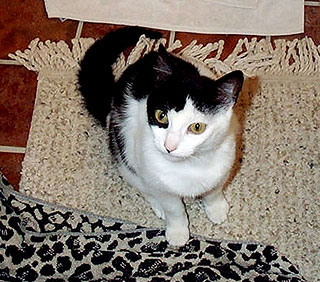 One Saturday afternoon on the way upstairs, we heard her tiny cries and followed them to a ground-level ventilation duct. There we found the diminutive black-and-white short-hair of a magpie kitty (which some would call a “cow cat”). She didn’t look more than a year old, judging by her size. (Turns out she was about 3, the vet later said.)

Her whiskers were mostly broken off, and she was a bit dirty and in dire need of food and some love, but she didn’t look sickly or seriously injured. We picked her up easily. She had no collar, but we turned her over and found faint scars from where she’d been spayed, so we figured she was someone’s pet who couldn’t find her way home. We had another cat, Cleo — a gorgeous long-haired Norwegian forest cat with bright green eyes who was the predictable feline combination of skittish and extremely territorial — but we couldn’t leave this little one unprotected. 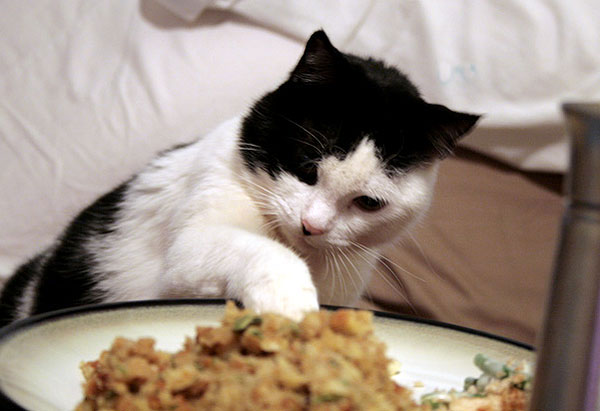 So we made a deal: We’d take her in, inquire at nearby shelters, scan the neighborhood for any fliers looking for this lost cat, and take her to the vet for a checkup. If we couldn’t help her get home, well, what happened next would depend on Cleo. We knew Cleo would be upset, but if the situation seemed even vaguely tenable, then Tiger Lily would stay. If not, then we’d help her find a new home. 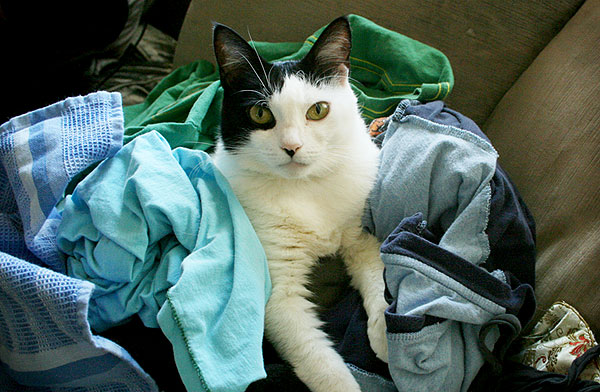 It was touch and go for a while. The first week, Cleo restricted Tiger Lily to the bathroom, not letting her pass the threshold. (We put a food bowl in there and added another litter box.) But gradually Cleo granted access to other parts of the small apartment, regulating the little one’s movements with the occasional hiss and paw-smack to the head. They were forming an uneasy truce, so we decided the little one would stay. We named her Tiger Lily, after the DJ we’d heard on KALX radio the day we found her.

A few months into the arrangement, Tiger Lily demonstrated her lack of mental acuity. One Sunday afternoon Daphne came home to find Cleo but no Tiger Lily. We lived on the third floor, so there’s no way she could have gotten out -ÔÇô unless the unthinkable had happened. And it had. The little one had pushed open a window near the bed and fallen three stories. Daphne found her hiding in a bush. She looked dreadful -ÔÇô much worse than when we’d rescued her -ÔÇô but miraculously, she’d suffered no serious injuries.

Regardless, she spent a night at the vet, and that’s when her bond with Cleo gained some strength. Cleo had seemed only to tolerate her, but with Tiger Lily gone, Cleo grew quiet and subdued, laying frozen on the bed with her paws folded beneath her, her big green eyes open wide, as if to ask where her friend was. 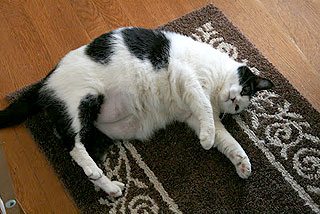 Not to worry, though; Tiger Lily was back the next day. It wasn’t long before she was happy, playful, and almost fully healed — running across the bed with her curiosity set on “high,” straight toward the window she’d fallen from only days before, wondering what it was all about. After that, we always made sure the old brass locks were tightly secured, knowing that Tiger Lily couldn’t outsmart even those simple mechanisms. Indeed, she didn’t get out again.