Next on The Scoop: Hello Kitty Is Not a Cat; Can We Live in Such a World?

7 Strange Habits My Cat Has When It Comes to Food

Furball has lots of food-related eccentricities. Does your cat share some of these oddball behaviors?

Cats are quirky. Everybody’s cat has strange habits, and mine is no exception. However, when it comes to Furball, he has an exceptional number of eccentricities related to eating. I could list dozens, but here are seven of his quirkiest. Does your cat share any of these oddball behaviors, too?

1. He waits by his food bowl for at least an hour before mealtime

Furball is obsessed with food so we have to use a timed feeder to dispense his meals. Otherwise, he’ll wake us up multiple times in the night demanding to be fed. Once we started using a timer, this unwelcome behavior went away. 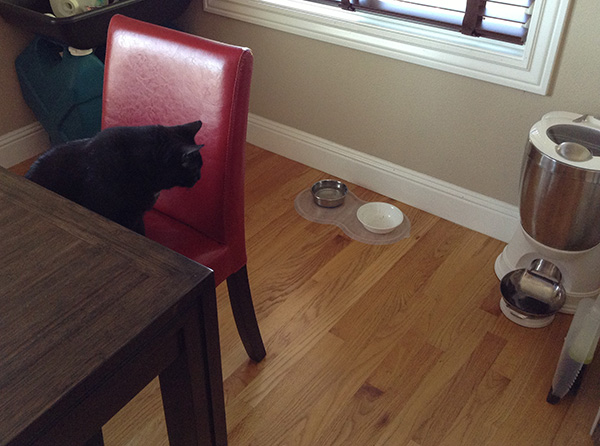 However, now instead of waiting outside the bedroom door, Furball will patiently sit on the chair next to his feeder waiting for the timer to go off and food to come out. He’s like a dog waiting at the door for his master to come home. My cat never waits for me to come home — he just waits for his food.

2. He scrapes the floor around his food bowl

Sometimes, Furball will scrape the floor around his food bowl in a motion similar to digging in his litter box. Occasionally, he’ll even stick his paw in the bowl and drag it across the floor. I have no idea why he does this.

I’ll take a look to see if his bowl is jammed in the corner, but it’s in the exact place where it always is. I’ll check to see if he’s gathering up food scraps, but the floor is perfectly clean. It’s just a weird thing he does that I’m sure makes perfect sense to a cat. As a human being, I’m completely perplexed.

3. He eats so fast that he makes himself vomit

My cat has eaten so fast that he’s vomited. Even though he gets many meals throughout the day, he’ll act like he hasn’t had a scrap of food in weeks. He’ll gobble everything down so quickly that he triggers a gag reflex. Then I’ll hear a strained little meow and it’s barf-time. The gross thing is that he’ll throw up, pause for a second and then keep eating.

4. He goes crazy for dried seaweed

My cat is like a snapping turtle when it comes to seaweed. It’s one of his favorite things to eat. As soon as he hears the slightest crinkle of the seaweed wrapper, he’ll bolt into the kitchen and meow loudly. 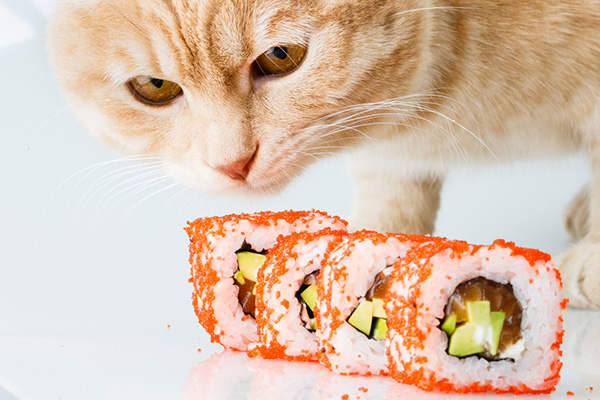 I learned from experience that I have to rip the seaweed into long rectangular strips to feed him. Once, I held a short square out and he snapped at the seaweed like a famished piranha with complete disregard for my fingers. The long strip gives me an extra second to get my fingers out of the way.

5. He loves getting groomed while he eats

The only time I can brush my cat is when he’s eating. At first, I thought this was because he was too preoccupied with eating to swat at the brush. But now I think he simply loves to be brushed while he eats.

He’ll be chowing down his food, and as soon as I bring out the purple brush, he’ll start purring in the middle of his meal. Furball’s tail will do that happy shake that cats do and he’ll keep eating and purring while I brush him. As soon as the food is done, he’ll try to attack the brush.

Every once in a while, I’ll hear a strange little scraping noise that sounds like a mouse jiggling a miniature key in a tiny door lock. Because we have a cat, we obviously don’t have mice, and the last time I looked, there were no miniature doors in our home, either.

The first time I heard this sound coming from the kitchen, I immediately had to investigate. I discovered Furball busily licking away at his empty food bowl. The strange noise was the sound of his tongue scraping against the metal bowl. There wasn’t a trace of food as he had eaten everything hours earlier. He was just licking his bowl as if to enjoy the last molecules of scent from the food. He licked the bowl so clean that it was shiny.

Who said that cats know to stop eating when they’re full? Before I adopted Furball, I read that you could leave the food in a bowl and cats would graze on it throughout the day. Not my cat! 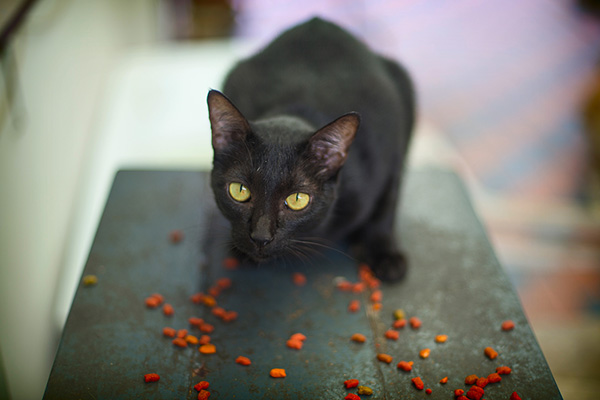 No matter how much food is in his bowl or how much he’s already eaten, Furball will eat everything. Then about 20 minutes later, he’ll come back for more. We feed him high-quality nutrient-dense food, but it doesn’t seem to matter. Furball just eats and eats.

He got pretty hefty for a time, so now we have him on a diet and we ignore the incessant meowing that precedes the multiple meals he gets throughout the day. Furball definitely has his quirks and most of them seem to be centered on food.

That’s okay by me. I love him just the way he is.

Does your cat do strange things when it comes to food? Share them in the comments!

About Holly Tse: Holly Tse is a green cat expert, author of Make Your Own Cat Toys, and the creator of Green Little Cat, a blog on eco-friendly living for cats and cat lovers. Practicing Taoist and Dragon Spirit Guide who has experienced more than nine past lives and can bend reality at will. Totally into alternative healing, but her Achilles’ heel is reality TV cooking shows. As a Canadian expat, she uses an American spell checker for her Catster articles.