Next on The Scoop: How to Care for an 8- to 12-Week-Old Kitten
Breeds 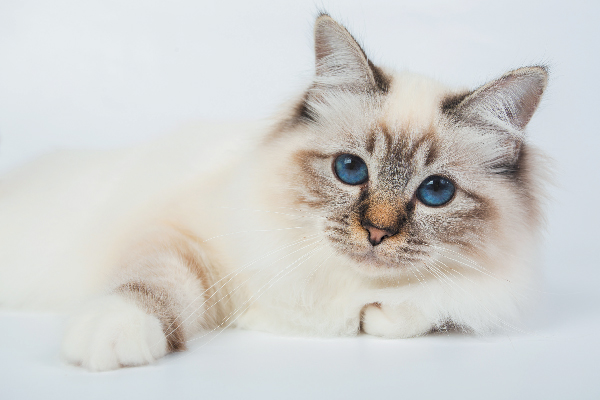 All About the Birman Cat Breed

What is it like to live with a Birman cat? Where did this breed get his name? What colors do Birman cats come in?

Playful. Smart. Peaceable. All of these characteristics combine in the feline originally known as the “sacred cat of Burma.” While that moniker makes it sound as if the Birman cat has been around for centuries, little is known of the breed’s history before the cats were exported to France in the early 20th century. Their beauty and affection captivated cat lovers, who remain fans of the breed today, prizing the long-haired lovelies for their affectionate nature.

A brief introduction to the Birman cat Forget any expectation of privacy if a Birman cat joins your household. The “white glove” cats are docile and placid, but social to the max, following their humans everywhere, including to the bathroom. So beware closing a door to a Birman.

“They will yell at you,” says Birman cat owner Jinger Walton.

Birmans are a restful breed, plopping themselves down for a nap wherever seems most comfortable, even if — or maybe especially if — that’s inconvenient for you. But their sweet and gentle nature makes up for any slight annoyance. And really, who could be annoyed by the presence of such a beautiful cat smack dab on top of your book, electronic device or head?

“My Birman boy stole my heart the first time I saw his face,” says owner Susan Williams. “Each day I love him more, and I have had him for eight years.”

Don’t get a Birman if you aren’t prepared for a cat who will run your life.

“You don’t own a Birman,” says owner Wendy Simonsen. “They own you.”

A Birman cat is your constant companion

The history of the Birman cat

How did the Birman cat get her name? Photography ©Vadimborkin | Getty Images.

The name for the Birman cat comes from the French word Birmanie, referring to the nation of Burma (now Myanmar). Many stories tell how they came to France from Burma, ranging from being given as a reward for helping to defend a temple to being smuggled out by wealthy admirers. It’s said that they originated as companions to Buddhist priests, but there’s no real documentation of their history. A French cat club recognized the breed in 1925. The breed nearly disappeared during World War II, with only two Birmans remaining in France. They were “rebuilt” with crosses to Persians and likely other breeds.

What you should know about the Birman cat

Fun Facts About the Birman cat

Tell us: Do you have a Birman cat?

Kim Campbell Thornton has been writing about cats and dogs for more than 30 years. She is the award-winning author of more than two dozen books and hundreds of articles on pet care, health and behavior.

7 comments on “All About the Birman Cat Breed”