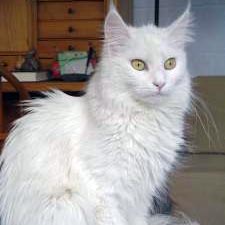 The Look of a Maine Coon

The Maine Coon’s shaggy, weatherproof coat, full plume tail and ear tufts provide protection from harsh winters. The coat comes in three types – down, fawn and guard. The thick ruff around the neck and bushy tail shield serve to insulate the body and keep it warm. The square-shaped head is broad, the ears are large and the eyes are big, expressive, and wide set. The breed’s muscular body features a broad chest and big boned frame.

The female Maine Coon weighs between eight and 12 pounds while the males can weigh up to 20 pounds. Their bodies can stretch up to 40 inches in length.

Maine Coons can rival the size of small dogs and are highly intelligent, playful and energetic. They thrive in families that include children and other pets, including dogs. Be aware that they are very dexterous and are capable of using their front paws like raccoons to scoop up food. They like to dunk favorite toys in water bowls. They have been known to stretch up, wrap their front paws on door knobs and open doors.

They tend to be a hardy breed, but are at risk for hip dysplasia, polycystic kidney disease and hypertrophic cardiomyopathy.

Bestowed many nicknames, including “Gentle Giant,” “Feline Greeters of the World” and “Shags.”

This longhaired breed requires minimal grooming because they keep their coats in top condition.

They are slow growers, reaching full maturity by age 4 or 5.

According to legend, British Captain Charles Coon sailed up and down the New England coasts in the 1800s and took some of his seafaring cats with him when he came into port. These ship cats mated with those on land with people referring to them as “Coon’s cats.”

Another legend mentions that these cats originally belonged to Marie Antoinette and were smuggled aboard boats bound for America as she was beheaded.

A true all-American cat, the Maine Coon was first shown at professional cat shows in 1878 and now ranks second in popularity only to the Persian in the 2007 Cat Fanciers Association’s breed registry. It is also recognized by The International Cat Association (TICA).