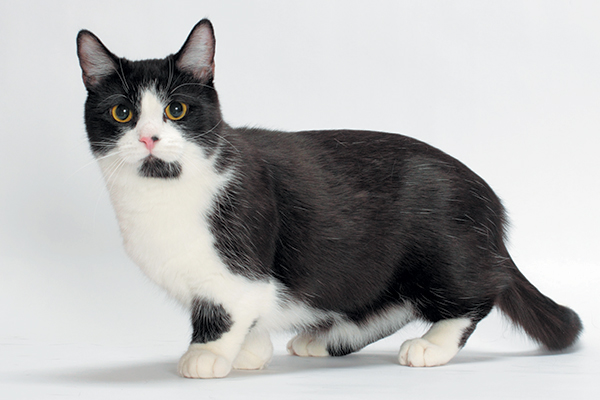 Munchkins are outgoing and playful, and enjoy lots of attention.

The Look of a Munchkin

The Munchkin is famous for its short legs, the result of a recessive gene. The rest of the cat’s body retains normal proportions.

Munchkins come in both long and shorthaired varieties, and in almost every color and pattern.

Despite their short legs, Munchkins are very mobile cats and can jump onto low tables and couches. They often find their way onto kitchen countertops if they can use smaller furniture to work their way up.

Munchkins are outgoing and playful, and enjoy lots of attention. Because of their mixed breeding, they tend to have a greater variety of personality types than many other recognized cats.

Even though their legs are short, Munchkins can still jump up on furniture.

The breed is steeped in controversy, and many cat fanciers do not believe Munchkins should be bred.

The modern version of the Munchkin breed was developed in Louisiana in the 1980s. The breed began when a short-legged tomcat named Talouse bred with feral Domestic Shorthairs around the town of Monroe, creating a population of short-legged cat.

How to Pick Furniture That Cats Won’t Scratch