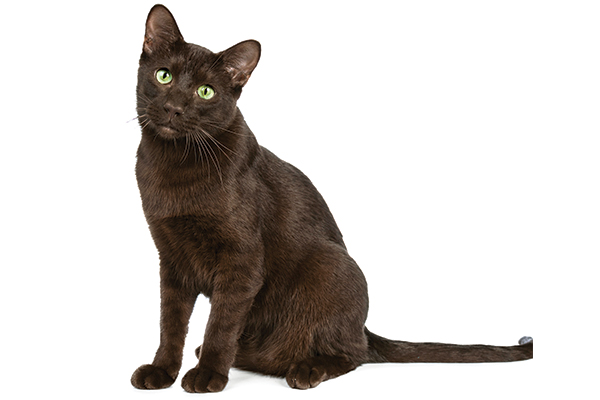 The Look of a Havana Brown

The Havana Brown’s most treasured physical attribute is its rich, glossy chocolate brown coat. Shades can vary from rich mahogany to reddish-brown. TICA accepts a variation of the standard brown breed color. Known only as Havanas these cats can also have solid lilac as well frosty gray with pinkish tones.

All Havana Browns have distinct heads that are longer than they are wide, with large rounded ears and brown whiskers. A medium-sized, slender but muscular body is typical of the breed.

Havana Browns are charming, playful, people-oriented and intelligent cats. They tend to have soft voices and are affectionate and devoted companions. Their coats are very short and lie close to the skin with no undercoat. They do not require any special grooming.

Due to their loving nature, Havana Browns prefer not to be left alone for long periods of time. They require generous attention, playtime and love.

The Havana Brown is a man-made hybrid of self-brown cats outcrossed with a variety of other breeds such as black Domestic Shorthairs, chocolate point Siamese and Russian Blue cats. The breed was created in the 1950s by a number of English breeders collaborating together using self-brown cats that existed as early as the late 1800s.

Known as Havanas in Europe, these cats were first imported to North America in the mid-1950s. Soon after their arrival, they became known in the U.S. as Havana Browns. Modern British Havana strains are reported to have an increased Siamese cat influence compared to the North American lines.