Next on The Scoop: Catster Quiz: What Your Cat Is Getting You This Valentine’s
Cat Dandy

My fianccee and I bought our cat a hot tub.

“I really didn’t expect my cat to love this,” Daphne wrote in a review of the little cat-size cylinder on Amazon.com, where we bought it.

I had another question: Where did Thomas get access to medical-grade marijuana? Because damn he looked high.

Did my cat really take drugs and crawl into a little tub of hot water? Well, no. But yes. Depends on how you look at it.

“This is kitty drugs,” Daphne remarked (not in her Amazon.com review).

You’ll see what I mean.

But first, no, it’s not really a hot tub. It’s a heated bed made for a cat. 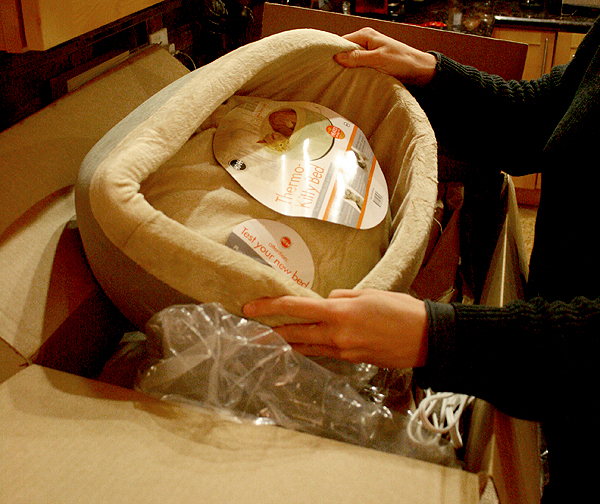 I call it a hot tub because that’s what it looks like — a little oval disk surrounded by walls. When Thomas is in it and the bed’s at eye level, you’d swear he was soaking, his little head peeking above the fuzzy perimeter, his eyes at half-mast.

I did have my doubts as to whether he’d like it. Two cats I’ve lived with before had heated beds like this one, and for one winter, the cats and beds were inseparable. But the following year when the weather turned colder, the cats approached the beds curiously, sniffed a couple of times and kept moving. We washed the beds. We put them in different locations. Nothing. I can only hope Thomas doesn’t do the same come October.

The kitty hot tub was waiting for Daphne and I on our porch when we got home from work on a Friday. We took it from the box, and Thomas investigated the new object. 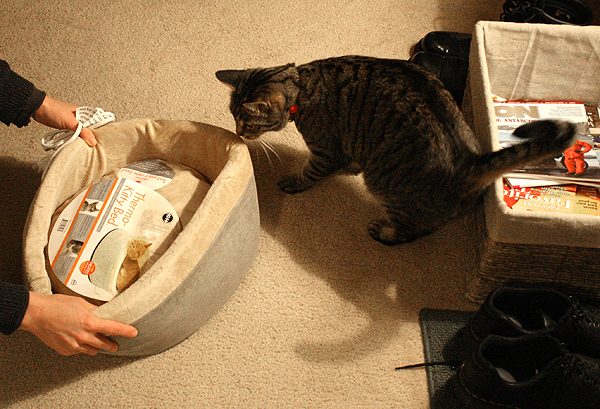 He was curious, but not very excited. 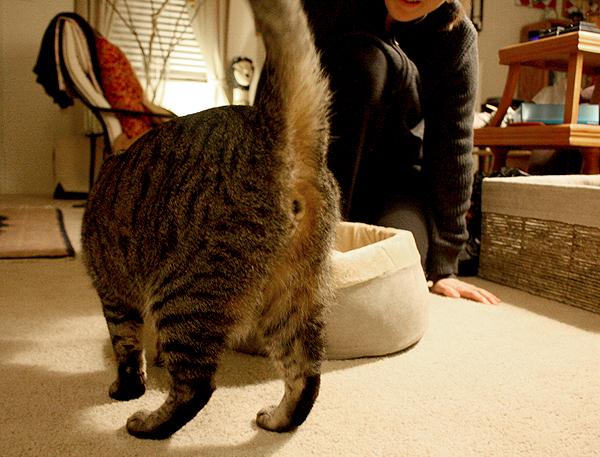 His attitude toward it? “Neither friend nor foe.” 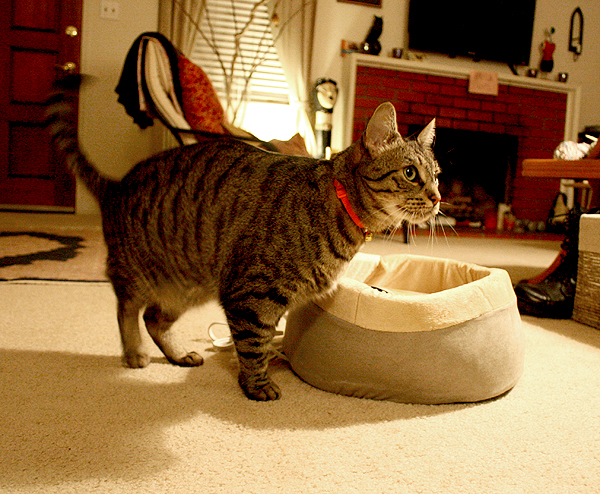 We plugged it in … 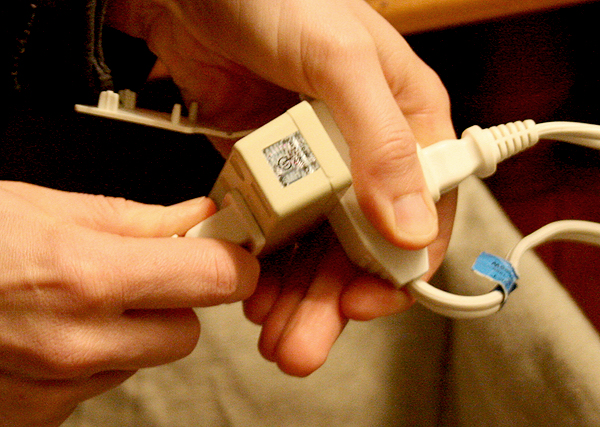 … and began the initiation. 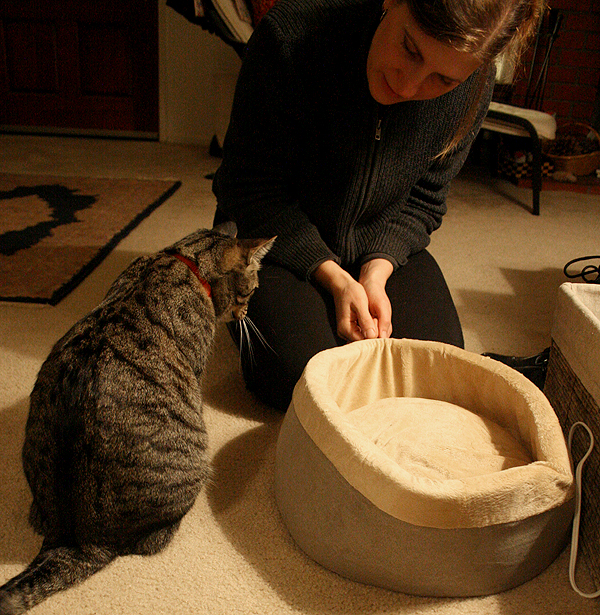 Knowing that a cat will automatically walk away from any spot a human puts him down, we set some bait: kitty treats. 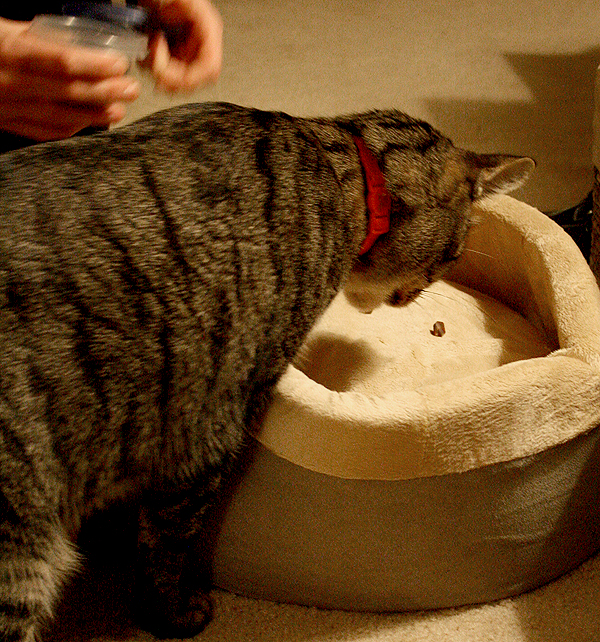 He took the bait. 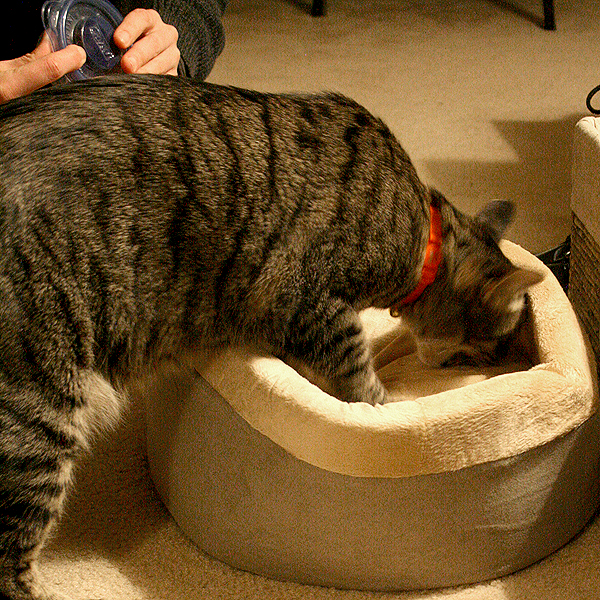 Next we introduced familiar scent, putting a hand towel that Thomas had slept on for a couple of weeks inside the hot tub, along with his catnip cigar. We then placed the assembly atop a quilt on a big wide arm of our sofa, which has been one of Thomas’ favorite sleeping spots of late. 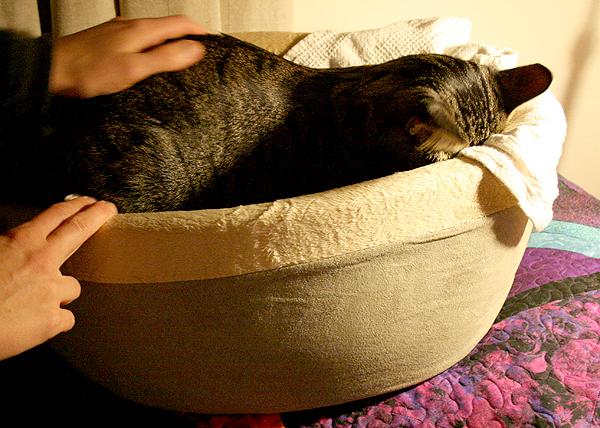 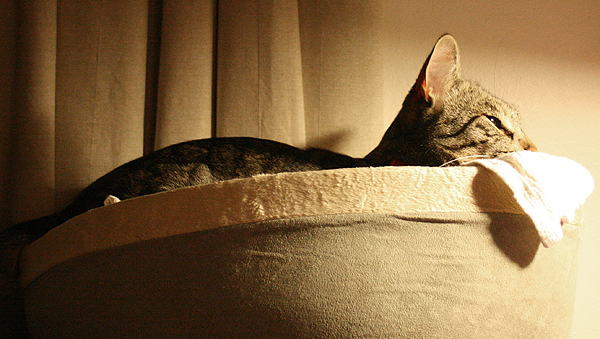 The relationship between Thomas and the tub developed quickly.

He seemed at ease. 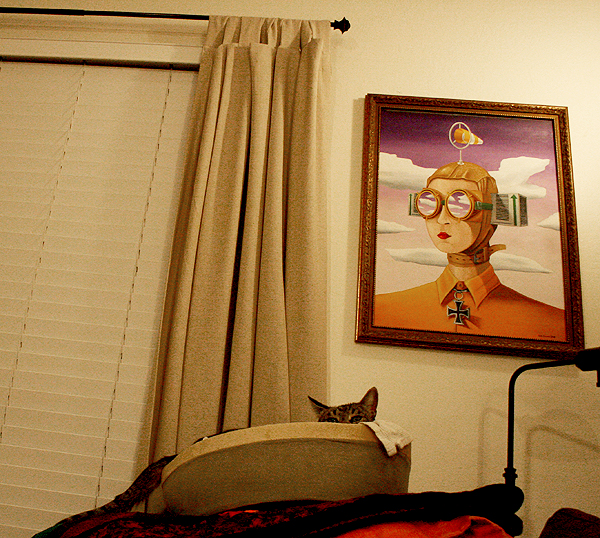 Then things got weird. I mean really weird. Thomas became so stupefied, so blindsided by the fluffy warm yummy enclosure of love, he was immobilized. His little head appeared over the side of the tub. His little mouth was partly open. His eyes had “morphine” written all over them. His movement … well, he had no movement, if you want to know the truth. If this moment were a Winona Ryder film it would be called Cat, Interrupted. His look was so intense, so uncompromisingly checked out, so absolute that I got a little scared. 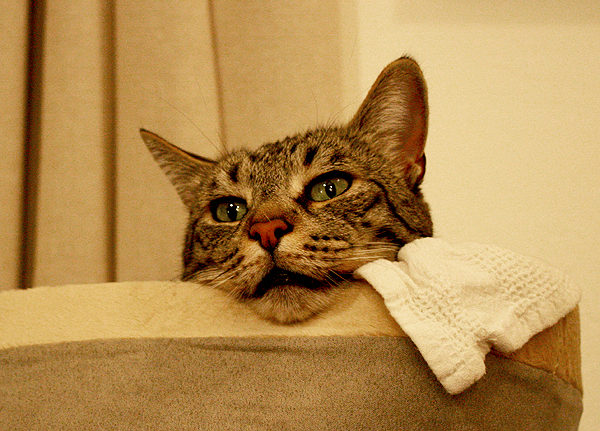 Let’s look at that again. It bears repeating. 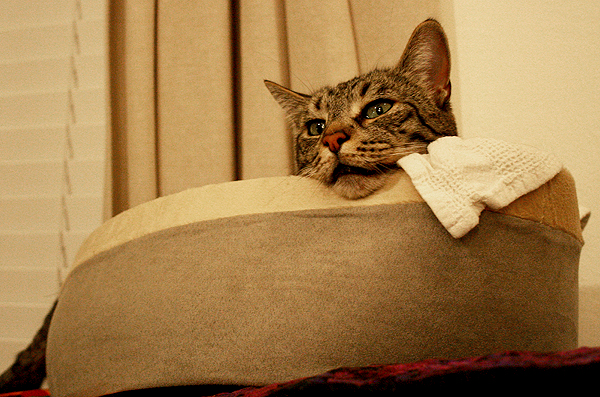 Now a view from the top.

Thomas held this inert pose, this wholly inanimate, all-consuming gesture, for about 10 solid minutes. Even then, his motion bordered on the imperceptible. 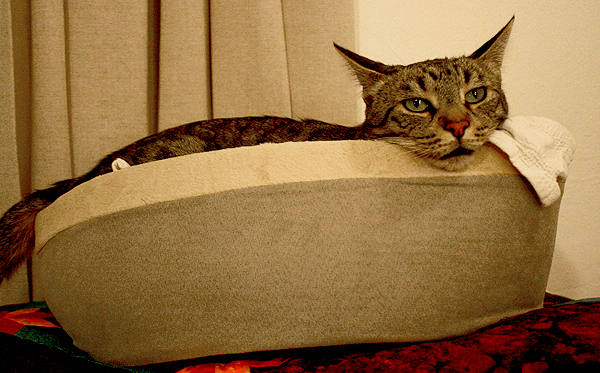 I wondered what would happen if we offered some light petting. 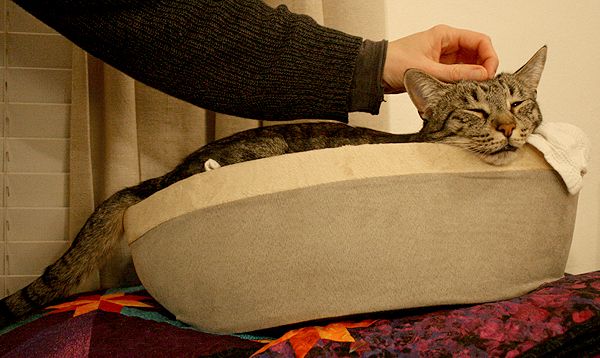 He stayed in the slightly altered position for just as long. Want to know remarkable? Want to see unthinkable? Look what was waiting for Thomas just a few feet away in his food bowl: 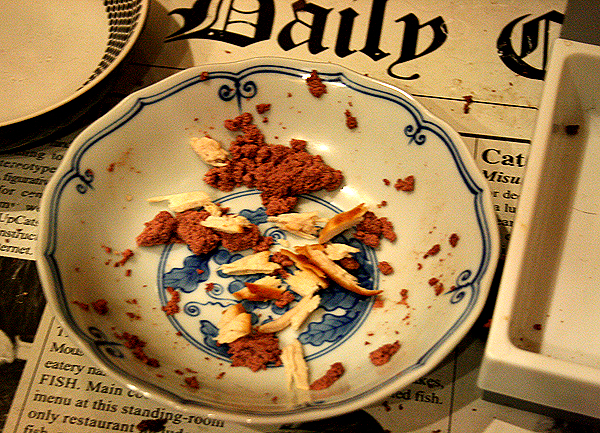 Chicken! In his food bowl! Thomas usually starts to harass Daphne and I for chicken (or pork, or beef, or bacon) a couple of days before we even know we’re going to the supermarket to buy it. Yet he ignored this chicken. For hours.

Then he rolled over. 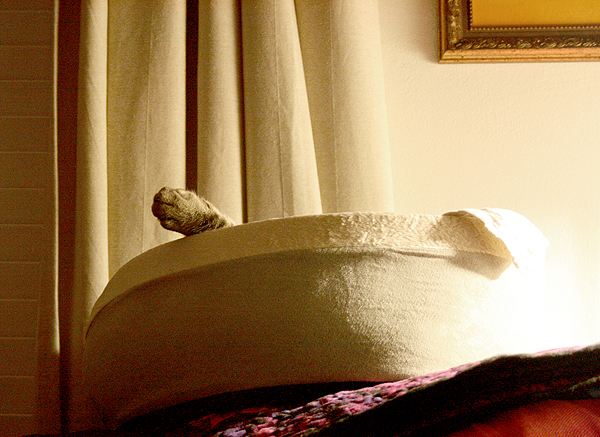 Daphne and I think he might have come out of the hot tub Friday night — but just long enough to take a whiz and get another beer or whatever. Saturday morning he was still “in the soup.” 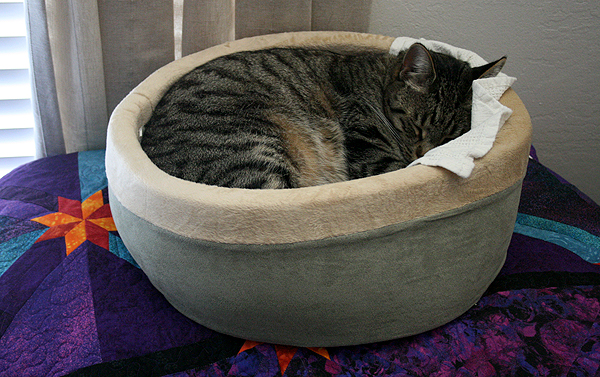 My approach with the camera sparked no curiosity in him. 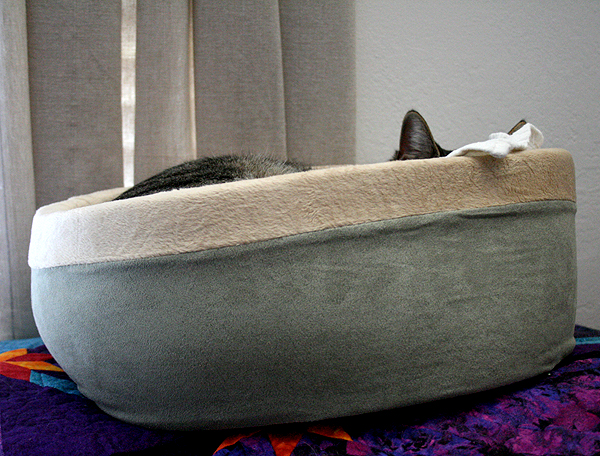 I petted him, and he did his usual “fall down” thing — except within the confines of the warm, murky, fluffy ecstasy of his kitty hot tub. 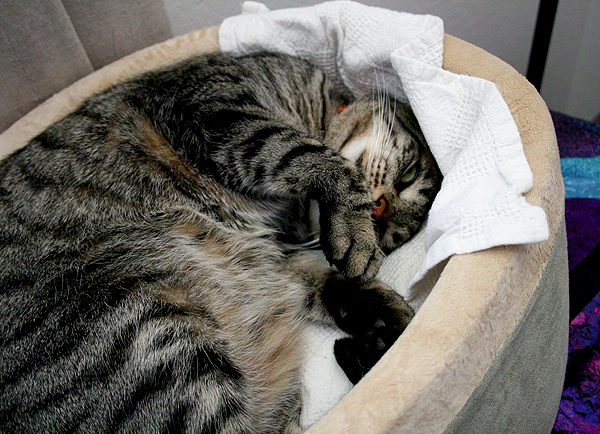 Then he went back to sleep. 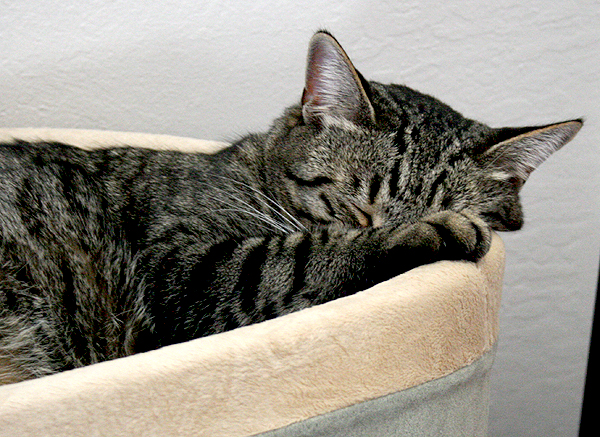 “To say he loves it would be a gross understatement,” Daphne wrote on Amazon. “My cat is addicted, plain and simple.”

I call this “the kitty good life.”

UPDATE: It has been more than a week, and it’s still working. See for yourself. 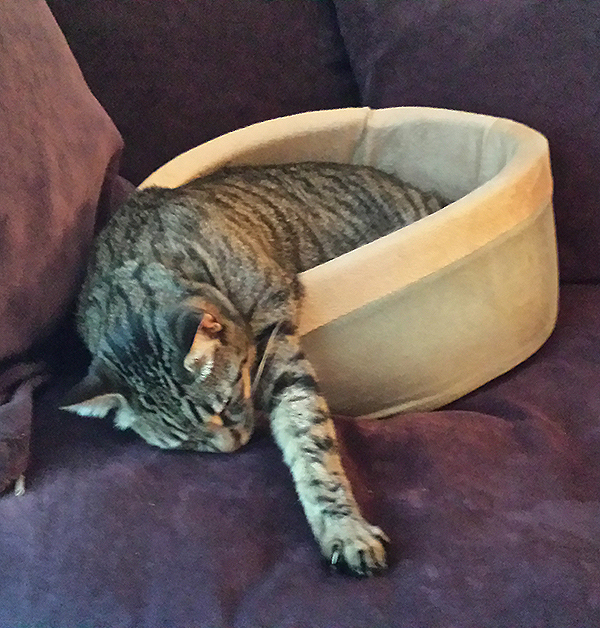 The same day Thomas’ hot tub arrived in the mail, I received a new hat. 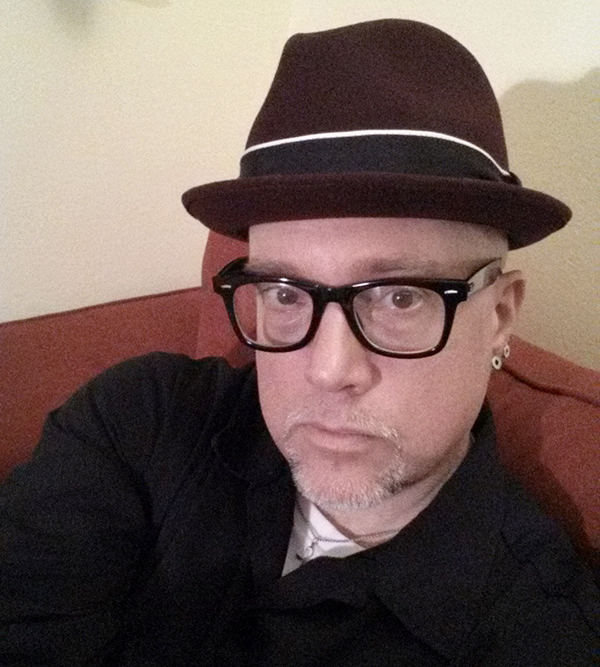 It’s a burgundy felt short-brim fedora from New York Hat Co. I wore it Monday for the first time. 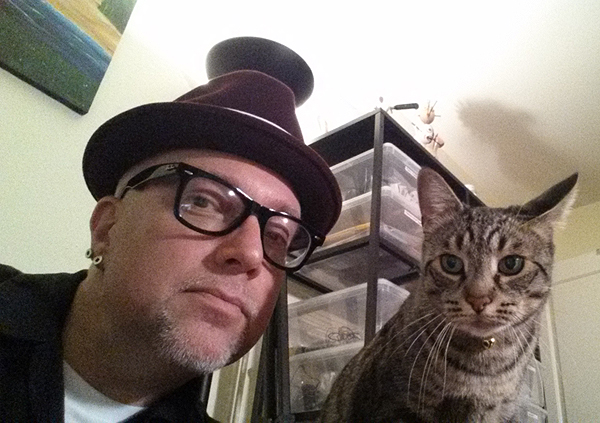 The black-and-white band matches the two-tone Doc Martens wingtips I wore, and the color of the hat itself matches my (also new) burgundy Dickies trousers.

The hat doesn’t really complement Thomas in an aesthetic sense, although burgundy goes well with gray, one of Thomas’ main colors.

What’s your experience with heated beds? Have your cats loved them or been indifferent? Did you have to lure them in like Daphne and I did? Did you get a new hat or trousers recently? Have you been expanding the color in your wardrobe? Does it match your cat? Tell me in the comments.

Cat Dandy know Bob Dylan was right, everybody must get stoned: