Next on The Scoop: What is Feline Hyperesthesia Syndrome? 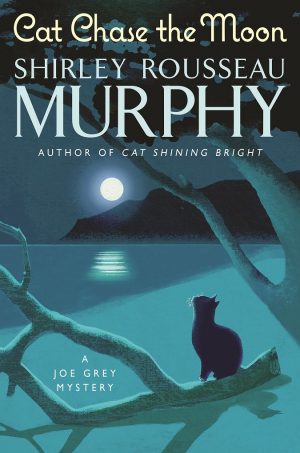 This is the perfect season to wrap yourself up in a blanket and get cozy with a good book. Need some recommendations? Check out these fun, new mysteries — cats included! Famous feline P.I. Joe Grey is back in the 21st installment of Shirley Rousseau Murphy’s beloved Joe Grey Mystery series. In this newest thriller, Joe Grey’s world has fallen apart when his teen kitten, Courtney, goes missing. All the cats and their human friends are searching the streets, worried that Courtney is hurt — or worse. But Courtney is locked in an upstairs apartment above Seaver’s Antiques, where she’s enjoying her first big adventure alone. Although frightened at first, she’s been coddled and pampered by Ulrich
Seaver. But he’s also hiding a dangerous secret that could put her and everyone in town in danger. Intent on finding Courtney, Joe Grey has been ignoring his detective work. Earlier in the week, he found a woman lying near the beach, nearly beaten to death. The police have hit a dead end in their search for the culprit, and Joe Grey worries that they’ve missed a vital clue. And then there’s the new couple who have just moved to town. Since their arrival, there’s been arguing, angry shouting and swearing in the wee hours of the morning. Their late-night shouting has masked the sound of a burglary in action, and now a criminal is on the loose. Joe Grey’s cat senses tell him these events might be linked. It’s up to him to solve the mystery before it’s too late. Published by William Morrow, HarperCollins Publishers.

Dead as a Door Knocker

This first novel in the new House-Flipper Mystery series by Diane Kelly introduces readers to Whitney Whitaker, a hopeless romantic when it comes to real estate. She knows what it takes to find and flip the home of one’s dreams, and she can’t resist the challenge of turning an eyesore into a work of art. So when one of her clients decides to liquidate a crumbling property, Whitney buys it for a song. But soon a curious incident changes everything. Whitney’s passion for gut renovation is a mystery to her cat, Sawdust, but one thing he knows for sure is that dead bodies don’t belong in flower beds. So why is there one in this house? Now it’s up to Whitney, along with the help of hot-and-cold detective Collin Flynn to find the truth about what happened before the mortgage property forecloses and Whitney loses her investment — or maybe her life. Published by St. Martin’s Press.

One Taste Too Many

In this delightful series debut by Debra H. Goldstein, you’ll meet Sarah Blair, a culinary-challenged, recently divorced woman adjusting to her new life. She has reluctantly swapped her luxury lifestyle for a cramped studio apartment she shares with her Siamese cat, RahRah, and a job as a law firm receptionist in the hometown she never left. She is the complete opposite of her bubbly twin, Emily, a chef determined to take her culinary ambitions to new heights. Sarah knew starting over would be challenging, but things get even worse when her ex-husband drops dead, seemingly poisoned by one of Emily’s award-winning dishes. And a glitch in her ex-husband’s will forces Sarah to relinquish her beloved cat to the woman who broke up her marriage. Sarah needs to crack the case before time runs out. But for a woman whose idea of good china is floral paper plates, catching the killer could mean facing a fate worse than death — being in the kitchen! Published by Kensington Books.