Next on The Scoop: The 5 Stages of Aggravation: When My Cat Wakes Me Up
Cat Guys

We know about cat ladies looking for love, but what about cat guys? Here's our first eligible cat bachelor and his cat, Smudge.

All my single cat ladies of the world, fear not. If you’ve been having trouble looking for love, I’m looking out for you. After I met my husband, I realized there’s not a lot of focus on all the eligible cat guys of the world, so I decided to start profiling them.

I’ll start by interviewing a friend of mine, Kev, who used to work at a shop next door to our house — my cat Freyja in particular seemed to develop a cat crush on him. I know most of our readers are in the United States, but here’s one for the cat ladies of the U.K. and Ireland. 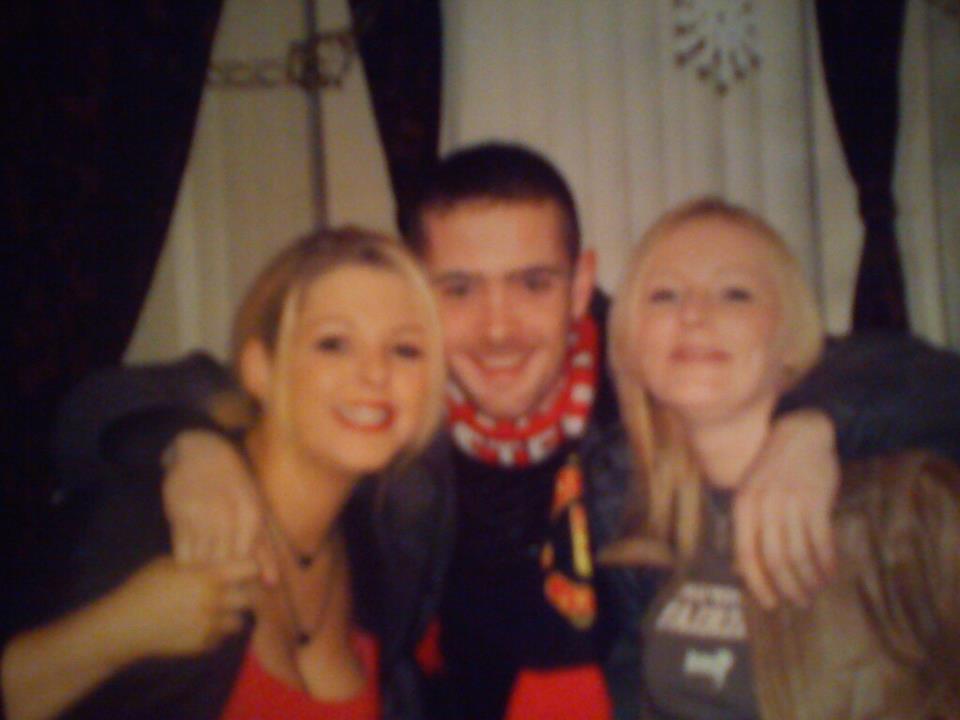 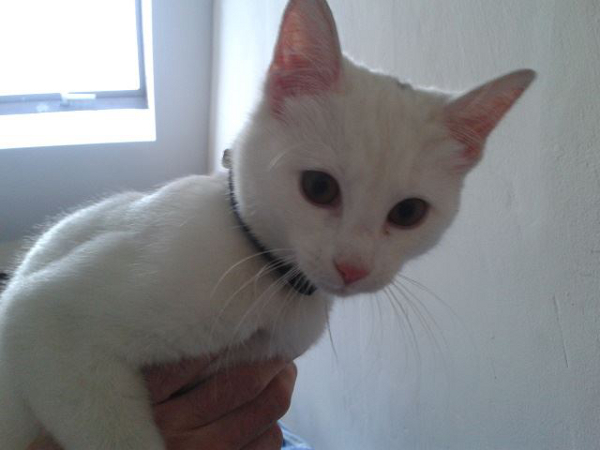 Kev: I’ve had three cats. My first cat, I’d just moved into my first flat when I was about 17, and I had always wanted a cat.

What do you love about cats?

They’re handy, they’re so easy to look after, they don’t come with a leash, and they’re good company.

Tell us a funny fact about Smudge.

She’s recently started on a bad habit where she tries to run up walls. And she got stuck down behind the water tank underneath the floorboards. That was some fun trying to fish her out from there. I didn’t even realize there was a gap behind the back of the sink until I heard her meowing one day.

How long have you had Smudge?

How did you meet Smudge?

I was meant to get another cat identical to Smudge from an earlier litter, but then my sister decided she was keeping that one. Then we discovered the mother cat was expecting another litter, and there was another Smudge — pure white cat with a black smudge mark. 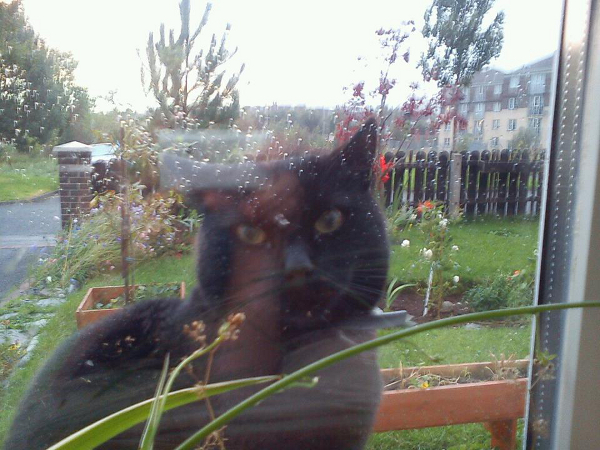 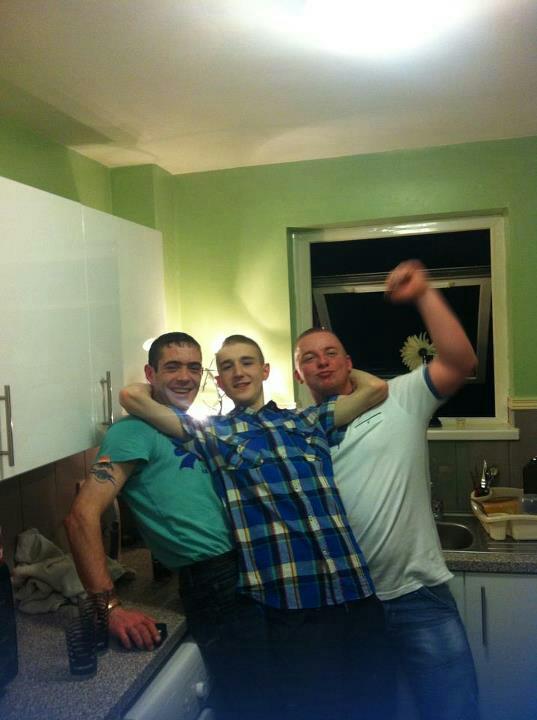 Is “must love cats” a requirement for dating someone?

It’s never really been an issue, but it’s more a problem with friends. They go on, “I don’t like cats, I don’t like cats,” but as soon as they meet them and spend some time with them, they come around.

Do you have any cat rules for your house? Like “don’t disturb the cat”?

Not really. I mean, it’s her home as much as it’s my home. I tell people not to get Smudge too wound up — she’s still young and when she gets really into playing she starts biting and the claws come out. I just stop playing with her when she gets too rough. I think my Smudge is coming around and learning to bat back without her claws.

If you were a cat, what kind of cat would you be?

I think I’d be more like a tiger or a leopard or something — I quite fancy the whole mountain-range thing. I like the idea of being a big cat. My first cat, funny enough, looked a lot like your Freyja, and we always called her Tigger. 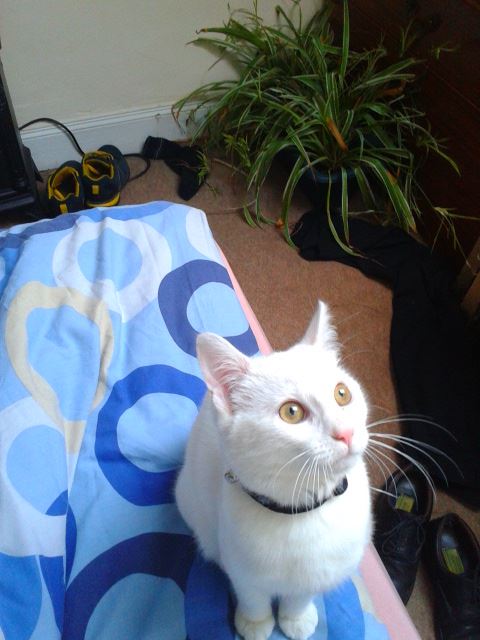 What kind of big cat would Smudge be?

I think she’d be like a wee lion club; she’s not reclusive in her behavior, she’ll just pounce at you!

Are you always wearing cat hair? Do you wear it proudly?

Yes. It doesn’t bother me, but I work in catering now so I must be aware of cat hair. But the likes of my jumper or my housecoat are covered in cat hair. 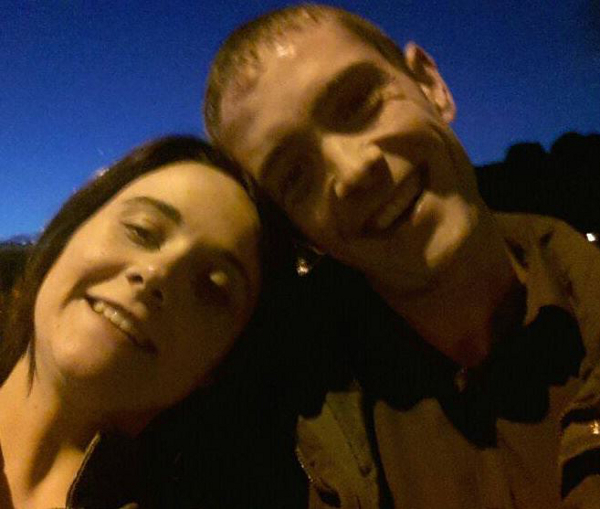 What would you say to people who don’t like cats or think it’s weird for men to like cats?

“Have you ever spent any time around a cat?”

What do you think about celebrity cats? And the Internet famous cats who do book singings and all?

When the cat’s living a better life than you are, you really gotta question yourself. It’s one thing to have a cat, it’s another when he’s eating caviar and flying on private jets. I’d say they’re stressed out, and a lot of these people might have no idea on how to read their body language. But a cat’s only ever going to do what he’s going to want to do, unlike a dog.

Is it hard to get up in the morning with a cat in the bed? 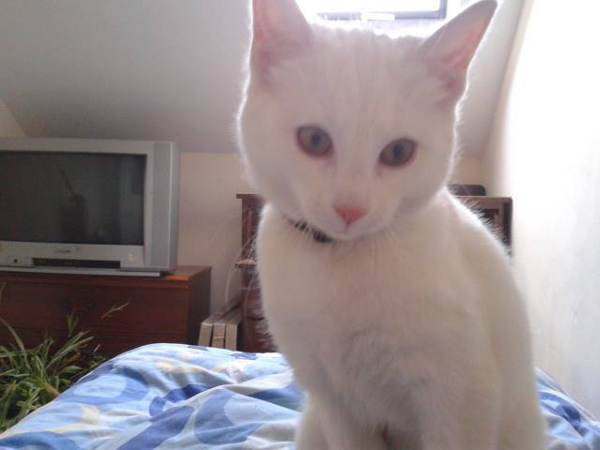 Well, ladies? Aside from cats, Kev also enjoys gardening, cycling, and toy cars. Are there any questions you’d like me to ask future cat guys? Who should I interview next? Greg, Brian, Matt, or my birthdad Pete? (Actually, Pete’s not on the market, but he is one cool cat guy.) Let me know in the comments! 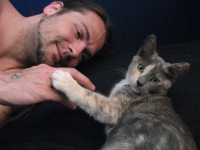 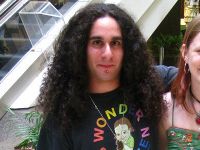 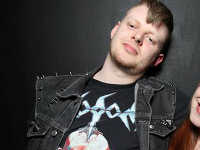 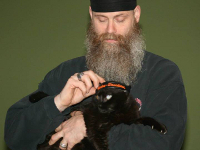 About the author: Hana lives in Belfast after moving from the U.S. of A. with her two spoiled kittens, two chubby rats, and one cheeky husband. Hana works in admin but occasionally goes on tour working for an Austrian death metal band. When she’s not putting up road-weary punk rockers and metallers, you can find her taking the cats around town in their stroller, whipping up new recipes, or playing way too many video games. She writes at Mommyish and Catster. Follow her on Twitter and Tumblr.