Next on The Scoop: Why Cats Love the Start of Baseball Season
Toys

11 of My Cats’ Favorite Things

My cats get new toys and scratchers, but these are the items that have really clicked with them.

Sure, we pet parents have our own favorite things we buy for our cats, such as the perfect carrier that doesn’t weigh a ton or cut into your shoulders or the toy that doesn’t leave a trail of catnip in its wake. But I want to tell you about a few of the favorite things in my cats’ lives, as selected by them. 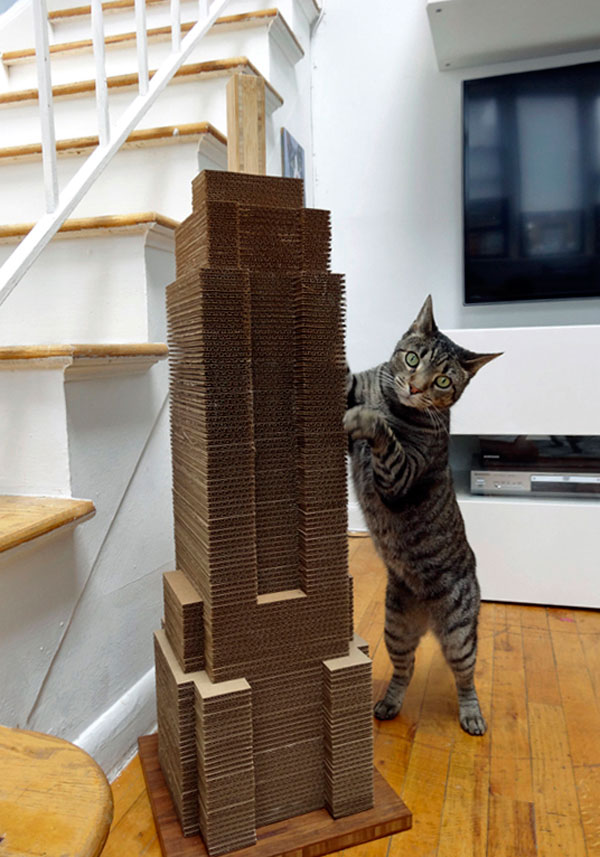 Since we live in New York City, I’d be remiss not to start by mentioning our mini Empire State Building replica, which doubles nicely as a scratcher. I’d prefer the cat leave it alone as I like it as a piece of art, but I guess it’s just too irresistible! 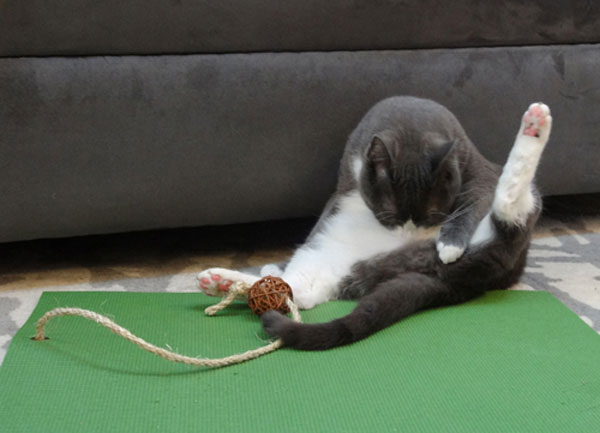 Petie demonstrates his stretching prowess, clearly facilitated by his yoga mat. I hope he can get back up! 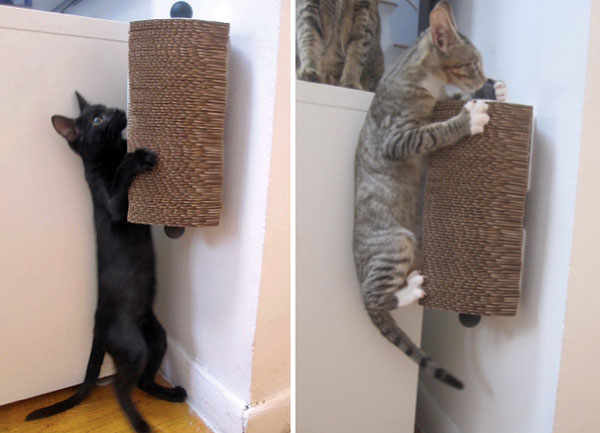 On the left, my former foster Roxy stretches up, while fellow foster Sparkle takes it a bit too far. "It’s not a rock-climbing wall, Sparkle!"

I’d be accused of false reporting if I didn’t include boxes and baskets among the list of cat favorites in my home. I know it’s not original, but there you have it. My cats are deprived children in this arena, though, because I don’t leave the boxes out for long because I think they look messy. (Catster writer Angie Bailey might disagree.) 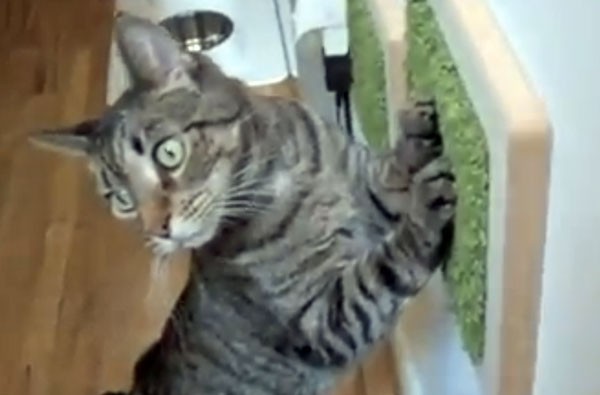 Sir Kippie prefers carpet wall scratchers. See how the green matches his eyes? They were an attempt to get him to stop scratching my furniture, but instead they’ve become a way for him to demand a snack. See how in the photo he’s looking towards the kitchen where the treats live?

I did a video review of cat scratchers. It’s rather long, because it sets up how hideous most scratchers are.

7. A delicious egg roll? No, a catnip toy from Polydactyl Cats 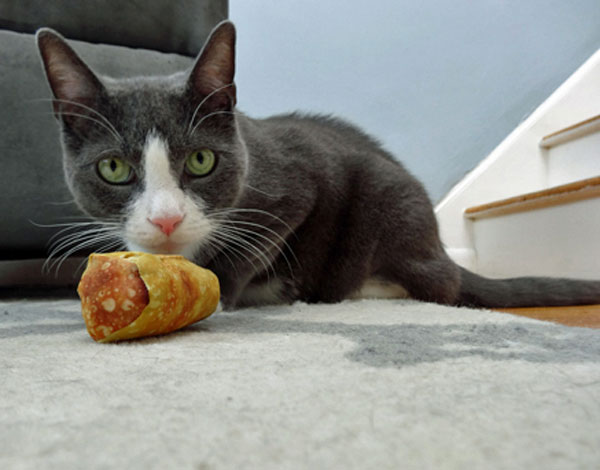 Petie is preparing to enjoy a delicious snack and his eyes are saying, "BACK OFF! It’s all mine." Don’t worry, it’s actually a catnip toy from Polydactyl Cats. I had a friend come over and only after leaving tell me he thought I had real egg rolls strewn about my living room floor. Great. What does that say about his perceptions of me? 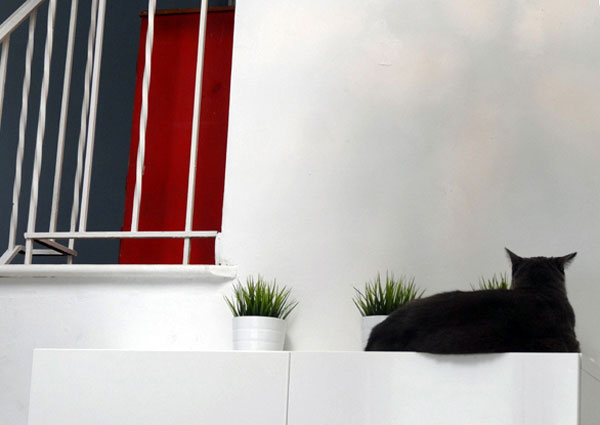 The top of my IKEA entertainment center has become a safe haven for any cat wanting a bit of alone time. I decorated it with fake cat grass, which I affixed with museum gel so it stays put at all costs. 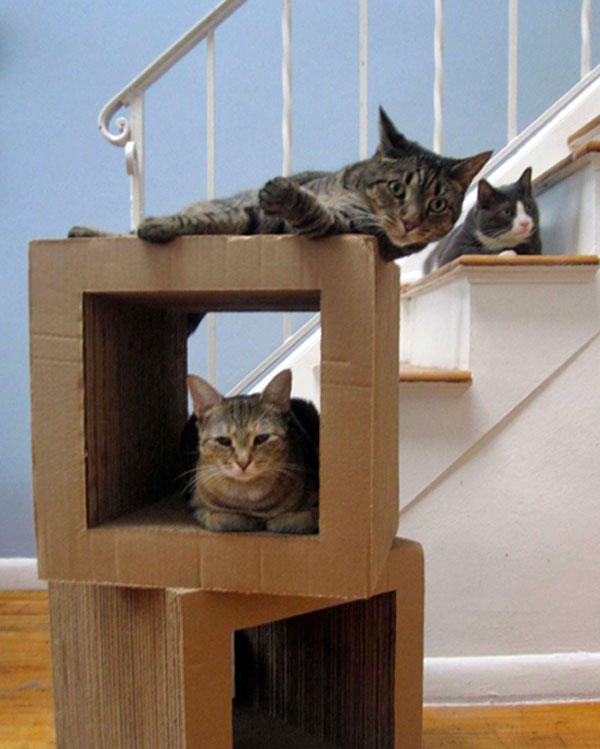 These corrugated cardboard cubes from Kittyblocks double as scratchers and loungers. I can’t lie: I have been tempted to use them as additional seating on occasion. It’s possible for all three of my cats to sprawl out on two blocks if one is on the very top. I like to envision the day I can afford a whole pyramid of cardboard blocks.

Haddie absolutely loves her birdie laser. She knocks it over and then looks at me expectantly to pick it up and spin it for her. Sadly, the batteries died recently and I haven’t gotten around to finding a teeny tiny screwdriver to open it up and change the batteries. I can’t wait to see her face when I do!

11. What’s happening in there? 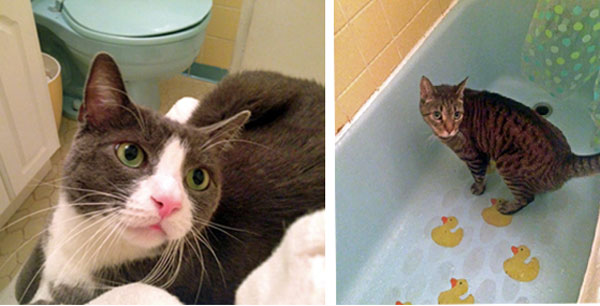 And one of the best things in my apartment when it comes to my cats would have to be ÔÇª the bathroom. It has some sort of magical power over them, like they think they’re going to discover a hidden stash of treats or something. Theyr’e always in the bathroom even when I’m not!

Sorry I can’t sell you my bathroom — not that I wouldn’t like to (did you see that color scheme?). But the other items are things you should be able to find to see if they become favorites for your cats, just as they are for mine!

What does your cat love? Let us know in the comments!

About the author: Tamar Arslanian is a singleton living in New York City with her cats Kip, Petie, and Haddie. Tamar writes about cats, relationships and life in the Big Apple on her nationally recognized blog, I HAVE CAT. She was recently quoted in People StyleWatch "What’s In What’s Out" about cat toy trends. Her biggest secret? She didn’t grow up with animals (unless you count goldfish and a hamster). When she finally got her first cat she was in her early 30s and it was all thanks to a man she was dating at the time. You can follow Tamar and I HAVE CAT on Facebook, Twitter and Pinterest.