Next on The Scoop: Meet the Handbags That Your Cat Might See as a Threat
Cats and Kids 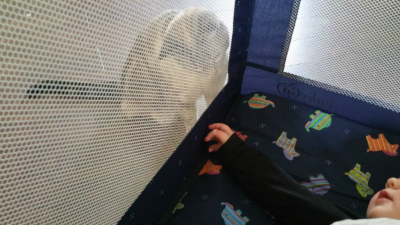 People warn me that my cats are going to kill, maim, or infect my baby. Are they serious?

Anyone who has ever been pregnant knows that nothing invites unsolicited commentary and advice quite like a gestating midsection. Relatives, friends, random people in line at the store — everyone has a bit of (often unwelcome) advice they’d like to pass on, and trust me, the general public has plenty of opinions about mixing cats with pregnancy. I’m a pretty obvious cat lady, but even when I’m wearing my cat pendant and carrying my kitty-themed purse, people feel the need to school me on why cats and kids don’t mix. Here’s five crazy things people say to cat-loving pregnant ladies like me.

1. You’ll never keep them out of the crib

Ghost Cat is drawn to the crib, but I have a really cool tool for keeping her out — it’s called a door.

If I had a dollar for every time someone’s told me I’ll never be able to keep Ghost Cat out of the baby’s crib, I would have enough money to buy a whole new crib! When well-meaning people make the ridiculous suggestion that I get rid of my cats, they usually also tell me a story about a cat who just couldn’t stay out of a crib and therefore had to be rehomed. Whenever I hear one of these stories my heart aches for the poor cat, and I wonder — why not just shut the bedroom door? That’s what I plan to do, because I know that the soft crib is pretty irresistible to Ghosty, but I also know that it’s unfair to place all the responsibility on her. As they say, the simplest solution is often the best one, and closing a door behind you is pretty darn simple.

Ghost Cat has already shown a propensity for cuddling with the baby (bump).

Everybody’s grandma, auntie, and next door neighbor has a story about a cat who cuddled up to a baby in the crib (probably because someone left the nursery door open) and nearly killed them. Often, the motive in these stories is the milky aroma of the baby’s breath, but Snopes debunked that whole “cat sucks the breath out of a baby” myth years ago. Now, it is possible that a cat could snuggle up to a sleeping baby and suffocate her, but according to experts, that is extremely rare. Babies are more likely to die from sudden infant death syndrome (SIDS) than from a cat suffocation. During a Swedish case in 2009, a cat was actually found on a dead baby’s face, but experts still suspected SIDS instead of the cat, according to media reports.

Ghost Cat was very interested when my nephew tested out our playpen, but she wasn’t aggressive!

I blame Lux for perpetuating this one. Ever since the black-and-white kitty from Portland attacked his family (scratching a 7-month-old baby) and prompted a 911 call, cats have been getting a bad wrap around infants. When people want to make a point about how dangerous cats are to little ones, they always bring up poor Lux. The My Cat From Hell alum certainly has a bad wrap, but people need to stop painting all kitties with his brush! For one thing, poor Lux has some documented medical issues that most cats don’t. My Ghost Cat is as happy and cuddly as Lux was angry, and although my girl Specter has a documented case of tortitude, she’s more likely to run from babies than to hurt them.

4. Their poop is deadly

When I first got pregnant, I was told to let my husband take over all litter box duties if I didn’t want to have a miscarriage, as if any contact with cat poop would be catastrophic. While it is true that toxoplasmosis — a parasite spread through cat feces — is dangerous to a growing fetus (it can cause serious eye or brain damage at birth, or blindness or mental disabilities later in life) it’s not really a big risk with indoor cats like mine. According to the CDC, cats get infected by eating infected rodents or birds. My cats have never even seen a rodent. They eat commercial cat foods, which the CDC recommends to prevent toxoplasmosis. The AVMA says if an indoor cat contracts the parasite, it’s most likely from raw meat or uncooked meat scraps, which we are very careful about in my house.

Although some uninformed folks on pregnancy message boards scolded me for it (I knew my risk of toxoplasmosis was minimal — minuscule even), I put on a mask and gloves and cleaned the litter. My husband still does it for me most of the time, but if he’s busy, I’m not gonna let Ghosty and Speck suffer the indignity of a dirty box.

5. You won’t love them once the baby comes

How could I ever fall out of love with a cat this adorable?

People love to tell pregnant women that their lives are about to change (as if we don’t know), and one of the often-cited changes people point to is a transition from cat-lover to cat-hater. It’s been suggested to me that I will fall out of love with my kitties the moment my child enters the world — that my motherly instincts will take over and make me realize that my beloved fur-babies were really just practice babies, to be discarded like dolls at a garage sale. It seems like everybody’s got an anecdote about a relative, coworker, or acquaintance who loved her cat like crazy before the birth, but rehomed it soon after.

When people tell me these stories I say this: My pets are my family, and I will love them forever. There’s plenty of room in my heart for my kitties and my impending kid. After all, people don’t rehome their partners or their older children when a new baby comes. Cats are family, too!

Did you hear similar things when you were pregnant? How did you react? Tell us in the comments!

Read more about babies and cats:

About the author: Heather Marcoux is a freelance writer in Alberta, Canada. Her beloved Ghost Cat was once her only animal, but Specter the kitten, GhostBuster the Lab and her newest dog, Marshmallow, make her fur family complete. Heather is also a wife, a bad cook and a former TV journalist. Some of her friends have hidden her feed because of an excess of cat pictures. If you don’t mind cat pictures, you can follow her on Twitter; she also posts pet GIFs on Google +