Next on The Scoop: Wordless Wednesday: Just a Little Nom… 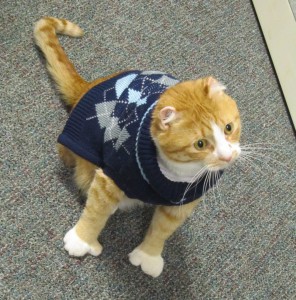 A Michigan cat whose sad story has made the news several times in the last two years now has a “happy tail” to share.

Hadley, a polydactyl orange tabby cat, went missing from his original home for a few days in July of 2009. When he returned, his family was shocked to discover that their feline friend had been doused with gasoline and set on fire. They rushed him to the vet where he received life-saving first aid and was diagnosed with third-degree burns over one-third of his body.

The distraught family realized that there was no way they could afford the medical care needed to get Hadley on the road to health, so they turned him over to the Humane Society of West Michigan.

The Humane Society was able to raise $10,000 to get Hadley the medical care he needed. He healed well and remained at the shelter, where he quickly became a mascot, bringing cheer and a welcoming wave of a many-toed paw to shelter employees and visitors both.

Minnie and Hadley quickly became best buddies, snuggling together at every opportunity. And when Hadley became available for adoption in April of 2010, it was with the requirement that he and Minnie go to their new home together. 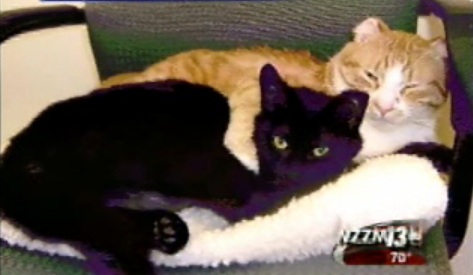 And now, the two special-needs cats have found their happy ending. They will be going to their new “forever home” soon, where they will hopefully share their love with their new people for many years to come.

This video from WZZM-TV tells the story of Hadley and Minnie’s adoption.

(If you’re in a reader, click this link to watch the video.)