Next on The Scoop: Human Foods for Cats? What Cats Can & Can’t Eat
Catster Tips A recent discovery about wildcat hunting techniques has brought new light to a well-known behavior in domestic cats — cat chattering.

A group of scientists doing fieldwork in the Amazon forests of Brazil were recording the vocalizations of a group of pied tamarin monkeys, when a wildcat showed up and started making calls identical to those of the monkeys.

This was the first recorded instance of a wildcat in the Americas mimicking the calls of its prey.

Wildlife Conservation Society researcher Fabio Rohe, who worked on the monkey project, suspects all cats can copy the calls of their prey. Cats are known for their physical agility, but this vocal manipulation of prey species indicates a physical cunning which merits further study, he says. 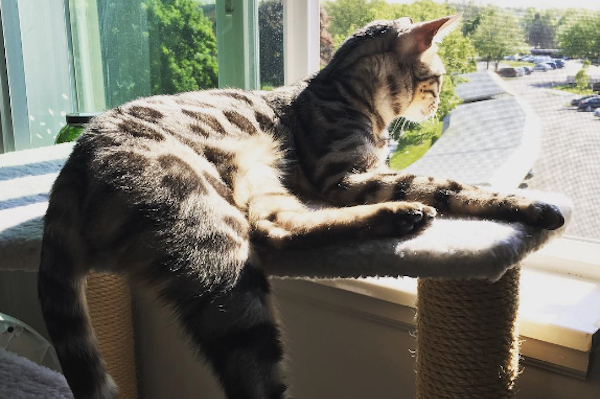 Even the most domesticated of cats still have hunting instincts, and behaviors related to those instincts surface from time to time. One of these is “chattering,” which generally happens when a cat sees a bird or a rodent outside a window.

Cat chattering usually begins with a bird loudly chirping near a cat. The cat becomes riveted to the bird. After just a minute, the cat will then start to tweet and chatter, its mouth moving in sync with the birds beak.

There are a few theories about why domestic cats chatter when hunting, says certified cat behavior consultant Marilyn Krieger, also known as The Cat Coach. The reasons that make sense to me are that they chatter in anticipation or they chatter when frustrated. Another probable reason for this is that they are chattering in response to the surge of adrenalin.

The word chatter’ implies meaningless sounds, but Rohes work in the Amazon indicates that the sounds could mean a lot more to the intended prey than previously thought. The monkeys in his study were nearly fooled, and many feral cats succeed in catching birds with the chatter technique.

YouTube is full of videos featuring talking cats, most of which simply show cats making unusual, human-like sounds when they are annoyed by something or they are about to expel a hairball. But this video shows a cat chattering that is obviously imitating birds it sees outside its window.