Next on The Scoop: Ask a Cat Lady with Sarah Donner: Help, My Cat’s in Heat!
Catster Exclusive

Meet Samantha Martin and Her Amazing Acro and Rock Cats

We talk to the troupe's "chief human" about training cats to perform in a circus and a band. Yep, you read that right.

When Catster asked me to cover Samantha Martin’s Amazing Acro-Cats and the Rock-Cats at San Francisco’s Boxcar Theatre over the weekend, my first thought was, "But you can’t train cats!" I read a quick synopsis of the show online and, still incredulous, told Catster to count me in. I had to see it to believe it.

The Acro-Cats’ "chief human" — as Samantha described herself in our email correspondence — generously offered her time before the last San Francisco show to talk to me and meet the cats. I first met Ian, her assistant, who introduced me to a lovable gray kitty named Pudge, the sweetheart of the traveling cat troupe. 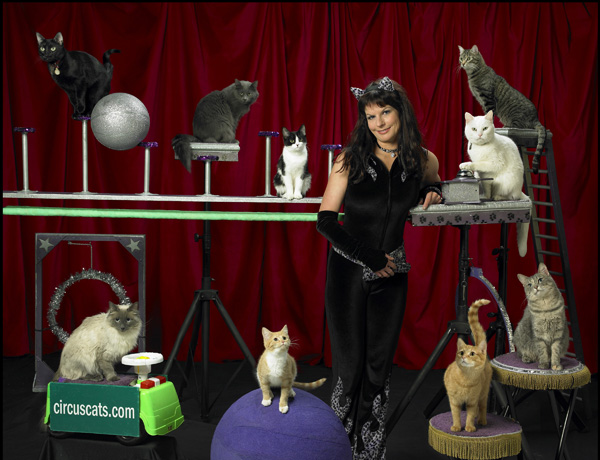 As Ian prepped for the show, I spoke with Samantha, the Acro-Cats and Rock-Cats’ ringleader (or roadie, depending on whether you ask her or the cats), who offered insight into the world of cat circuses and cat training. "Cats like to be trained," she told me. "It’s a game for them. It’s problem-solving. When cats misbehave it’s often because they are bored, and training can help solve those issues."

Samantha employs clicker training to get the cats to perform certain tricks, calling the click the "language that bridges humans and cats." Using nose- and paw-specific target sticks, she guides each cat’s innate personality and behaviors, tailoring an Acro-Cat’s repertoire of tricks to suit what the cat already likes to do. "Training is 90 percent observation," she says. She spends a lot of time watching and learning about her cats, and it’s clear from her show that she possesses a profound relationship with each and every one of her circus kitties. 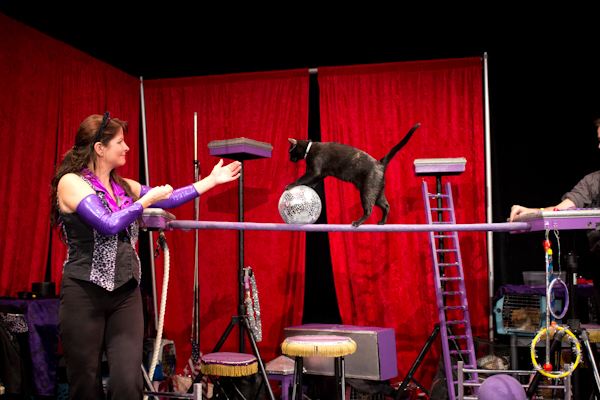 It’s a vocabulary for animal empathy that’s been twenty years in the making. Based out of Chicago, Samantha began her animal career with a show of circus rats, which earned her a spot on the talk show circuit, as well as a couple of television specials. The rats, however, proved to be divisive creatures: "People either really loved them or really hated them, and their responses were extreme."

She then began working with small exotic species, educating and advocating for animal awareness in addition to awing audiences. But what Samantha really wanted to do was provide trained animal actors for film and TV, and there simply weren’t enough casting calls for groundhogs and chinchillas, so she turned to the second most requested creature thespian — the cat. 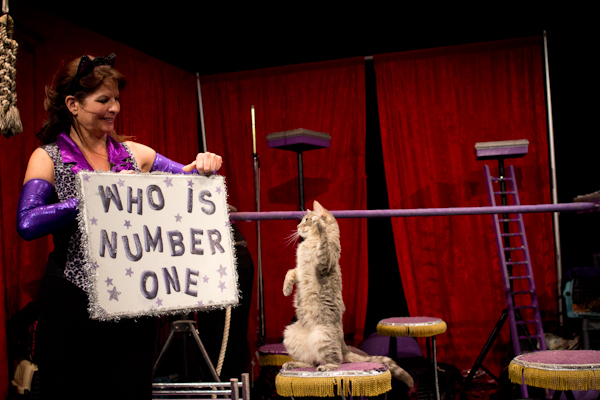 She embarked on her cat-training journey seven years ago when she answered a Craigslist ad for an art opening looking for some sort of wild entertainment. The setup was very simple and provided a trial space for her act. What she discovered was that almost no matter what, people loved the cats — whether or not they performed on cue, they endeared themselves to their audiences.

Four years ago, Samantha had her first theater performance, which is where the road got a little rocky. Filling in for world-famous cat-ringleader Popovich — who dropped out of a pet show at the last minute — she quickly learned where her own show needed improvement. She said the dog-show people didn’t like her because they thought her props were disorganized, and the bird-show people didn’t like her because the cats allegedly tried to eat the birds (an accusation Samantha denies … and after seeing how calm the cats are, I believe her!). Despite the disastrous stint, she received a lot of helpful critique, which helped her refine her Acro-Cats. It was clearly a blessing in disguise. 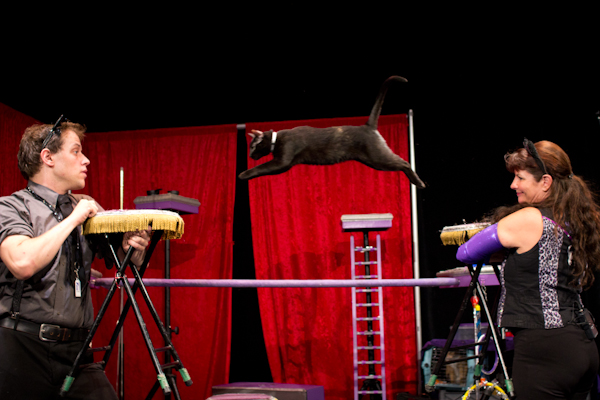 Now her show is composed of 13 traveling cats whose distinct personalities sometimes present a challenge. Through tireless training, Samantha has acclimated the kitties to constant change, and one of the most impressive aspects is how at ease all the cats are throughout the show. The biggest role in their comfort is the cats’ affinity for their crates. Samantha associates the cats’ crates with a feeling of safety, through a slow process of feeding her kitties inside their carriers so that it’s not a place of terror, change, and uncertainty, but a space that is comforting, like a den.

The cats are trained to enter their carriers with a whistle, a trick that — beyond being adorable — will help save their lives in case of an emergency. "You can’t spend those few seconds looking for a scared cat under the bed," she says. "You have to be able to get them and run." 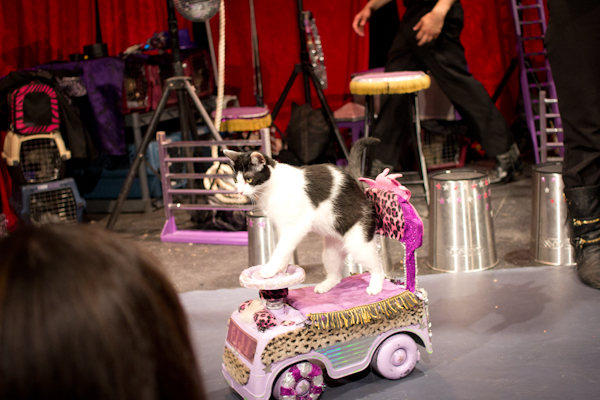 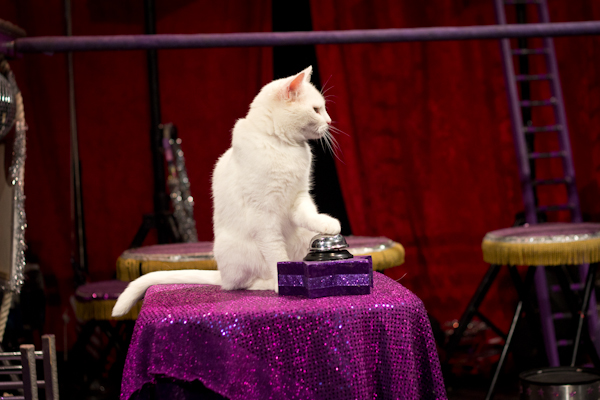 But while the cats may have their crate training down pat, they are not always so keen to consistently perform other tricks. Sometimes the feline performers pick up the "wrong" trick, and in moments of frustration, will default to the first trick they learned (for the show’s star and celebrikitty, Tuna, her default trick is ringing her bell). This is especially problematic when the cat attempts a whole routine in the background, trying to earn a tasty tuna snack. Samantha says it keeps her on her toes, and through the show she’s learned a lot about patience and improv.

Sometimes a cat just doesn’t want to perform. In that case, Samantha cracks a joke, her showmanship honed to roll with the punches. She has an infectious sense of humor about it — if she didn’t she wouldn’t have lasted this long. 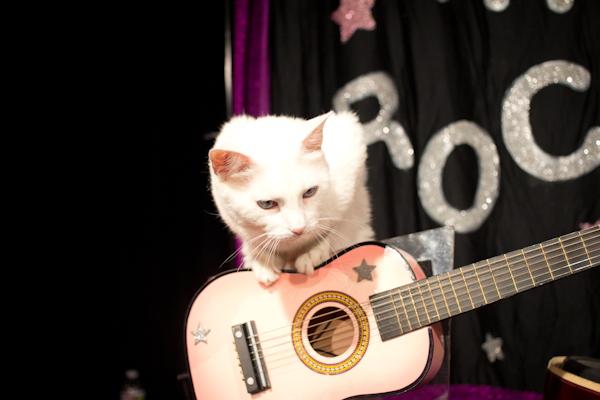 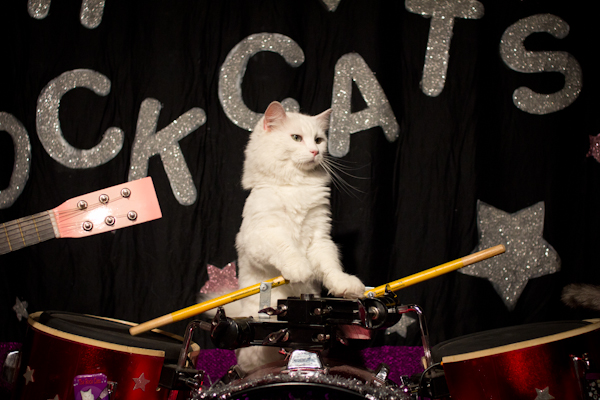 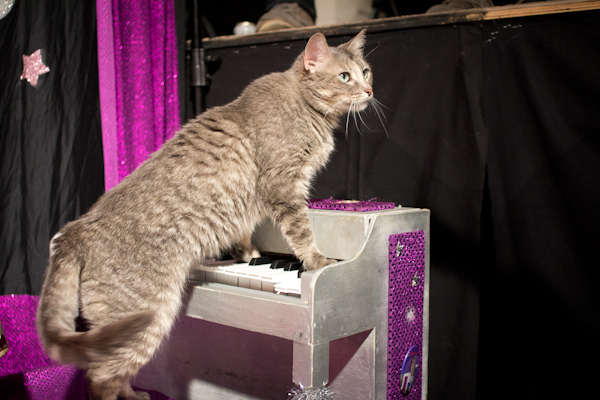 Like any famous human rock band, the Rock-Cats can be particularly demanding. Imitating their human counterparts, Pinky (the guitarist), Dakota (the drummer), and Nue (the keyboardist) just barely tolerate one another onstage, and when not at their instruments they reside in separate accommodations. Their riders reflect their catitudes, with each member treated with specific kinds and cuts of meat.

The show’s founding member and cowbell-ringing aficionado, Tuna, was described by Samantha as the "Elizabeth Taylor" of cats. As such, Samantha cautions curious cat lovers against trying to pet her. "She will take a piece out of you," Samantha warns when the audience was invited to meet the cats. 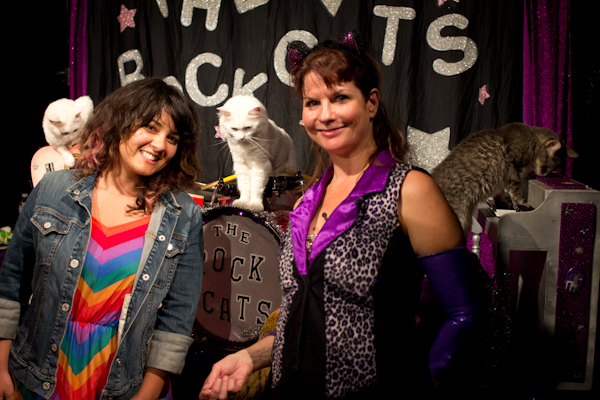 And no cat show would be complete without a rescue effort. Samantha has found homes for more than 90 cats through a very unique process. She fosters litters of kittens, training them all and selecting certain bright stars to join the Acro-Cats. The rest of the kittens are available for adoption, and one or two of them will tour with the show and may even go home with an awed audience member (after a waiting period, of course, to avoid impulsive decisions).

By training all the cats to perform at least one cute trick, Samantha endears them to their new owners, which makes them less likely to relinquish the cats later on. One family even still sends photos of their own Acro-Cat, who still performs her trick. I was impressed with Samantha’s strategy. 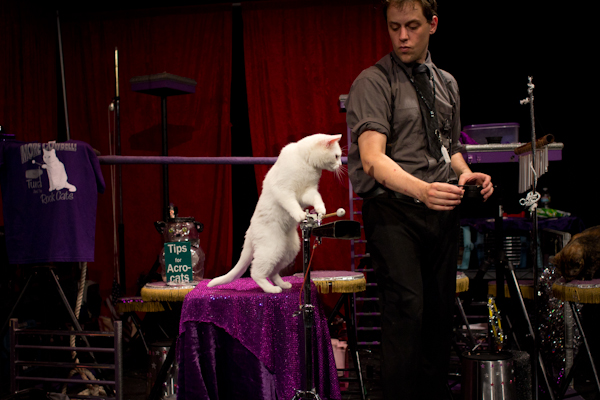 The tiny theater was surprisingly packed for a late Sunday night show, with people from all walks of life. Throughout the Acro-Cats and the Rock-Cats’ performances, the cats jumped through hoops, weaved along tightropes, rolled disco balls, drove remote controlled cars, and even bowled a strike against a chicken named Hen-diana. Tuna delighted us with her take on the SNL "Don’t Fear the Reaper" skit, and kept calling for "More cowbell!" to the Rock-Cats’ numbers.

The cats were introduced one by one, along with their backstories. Oz is the clown, Sookie is the airhead, Asti is the sneak, Jax is the troublemaker, Wiki is the daredevil, Buggles is the nerd, and so on. Little Annie’s role seems to be enthusiastically stepping up to fill in when her Acro-Cat companions fall flat. 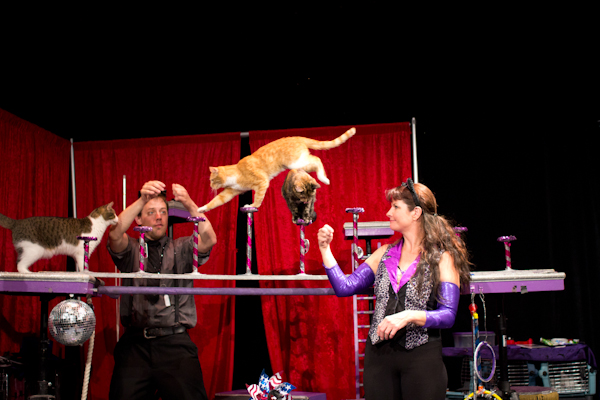 That’s actually one of the best parts of the show: when the tricks fall flat. We can encourage and support certain behavior in cats, but that doesn’t mean they will always do it on cue. And we will always forgive them for it — in fact, we’ll still laugh and applaud, even when a cat fails to jump through a hoop.

There’s something to be said for that ÔÇª and something to be said for turning that forgiveness toward ourselves and admitting that there are days when we’d much rather stretch and snooze than walk the tightrope of life or balance the ball of work and play. Sometimes it’s okay to walk off stage to cuddle in someone’s lap. When we meet others’ and our own expectations, that’s great, but even when we don’t, we’re still purr-fect.

The Amazing Acro-Cats are on tour! Check the website for showtimes and locations, as well as for adoptions opportunities and awesome cat lady merchandise … and don’t forget to like Tuna and the Rock-Cats on Facebook to find out about their upcoming fundraiser to help replace their Cat Mobile and keep the show on the road! You can also follow Tuna and Buggles on Twitter, where the cats often swap verbal swats — meow!