Next on The Scoop: Wow! Colonel Meow’s Minions Have Raised $20,000 for Vet Bills
Obsessions

Nothing Says Holiday Spirit Like a Puking Kitty Saucy Boat

An artist named GingerELA made a gravy boat that mimics a barfing cat because, well, why not?

It’s just not Thanksgiving unless your cat has upchucked some goodies on the carpet, am I right? Okay, maybe I have different holiday traditions than most people. But nevertheless, all cat lovers have, at one time or another, had to show that love by taking some paper towels and gingerly cleaning up something that didn’t sit quite so nicely in kitty’s stomach. The ability to do that with grace and calm, even if it’s right in front of friends and family and on the carpet that’s just been steam-cleaned, is when your love for your cat really shows. Anyone can scritch a cat’s head, or tease one with the laser pointer. That’s amateur stuff; cat love for pros almost always involves icky bodily fluids at inconvenient times.

Which is why I actually find the Puking Kitty Saucy Boat kind of sweet, albeit in a perverted, kind of twisted way. It’s gross, but it’s a grossness that we’ve all had to go through at one time or another. There is something reassuring in knowing how many people have gone through that, and laughing at it.

The name pretty much says it all: It’s a porcelain gravy boat in the shape of a gagging cat. The gravy (or whatever other liquid you choose) spills out of the cat’s mouth and onto your food. It looks disturbingly realistic. To be fair, it does take a very dark and gross sense of humor to think of that as something that would enhance the meal, instead of just making everyone decide that they’d be much better off just heading to McDonald’s. 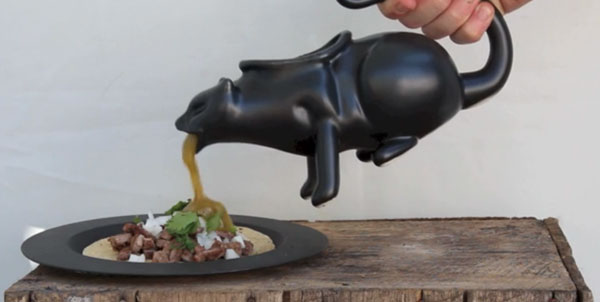 The Puking Kitty Saucy Boat is the brainchild of glass artist GingerELA. Inspiration, according to the website, came from seeing a picture of a barfing squirrel gravy boat on Laughing Squid. For Ginger and her friends, though, the barfing squirrel was missing something. A certain je ne sais puke, as it were.

“We found it pretty hilarious, but we felt like the squirrel was only incidentally barfing and not intentionally puking,” the site says. “A cat would be much funnier, so Ginger made one of her own out of glass.”

So what do you do after you’ve made a puking porcelain cat and showed it to all of your friends, much to their endless amusement? This is 2013; I shouldn’t even have to ask that. Naturally, you set up a Kickstarter so that you can refine your work and sell it to the world. The Kickstarter made almost $15,000, more than enough to make a whole batch of puking kitties and sell them through the Interwebz. In other words, living the American Dream. With vomit.

The Dream seems to be working well so far. As of this writing, the site says there are about 250 Puking Kitty Saucy Boats left. Go grab one in time for the holiday meals!