Next on The Scoop: Creating a Memory Book 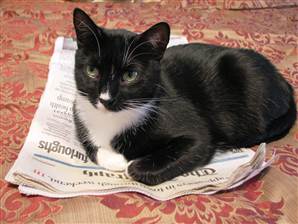 Superachiever Oreo comes from the most humble of beginnings. Found in a roadside ditch when only a couple of weeks old, the Collins family of Macon, Georgia, adopted and nutured her.

Kelvin Collins, who is the president and CEO of the Better Business Bureau of Central Georgia encouraged Oreo in her scholastic efforts by helping him investigate online diploma mills.

He helped Oreo sign up to work for her diploma online, and even paid the $200 tuition fee for her.

Oreo was a star pupil, earning mostly “A”s in her classes, including credits for an essay she wrote about her “life experiences.” Collins did provide some support in helping Oreo complete her coursework, help she probably wouldn’t have needed if she’d been born with opposable thumbs. It didn’t hurt that anytime Oreo missed a test question, the test provided a helpful hint at the answer.

Oreo was rewarded for her academic prowess with extra treats and a self-cleaning litter box.

Unfortunately, Oreo’s diploma is not the same as a GED diploma. GED tests cannot be taken online. Collins says that Oreo’s “degree” serves as a warning to those ready to buy worthless diplomas. “We (the BBB) do a lot of stories on these diploma mills, but a lot of times consumers really dont get it until you show them an example of how they (the diplomas) aren’t worth much.”

Like many recent graduates, Oreo is unemployed and living with her family. But Collins insists that we need not worry about her future: “Like Oreo wrote in her test essay, she always lands on her feet.”