Next on The Scoop: 6 Human Activities That Are My Cats’ Total Obsessions
Vid We Love

In this video, people in L.A. are led into a room for a guided meditation -- and kittens are unleashed.

What’s the best way to manage the stress of your daily life? The average person collects bucketloads of it every day, and I sometimes feel like I should probably rent a storage locker to hold all the runover that just can’t fit into the house.

Professional counseling and therapy is the ideal, but it has never quite worked for me. Part of that is just the sheer expense of it, and writers aren’t know for their great benefits packages. But also, I’ve never quite found one that fit. The last time I went to a group therapy for depression, said therapy included a CD full of very bland, instrumental New-Age music. I am constitutionally allergic to woo, and advice to “think good thoughts” just triggers my cynicism and hostility. 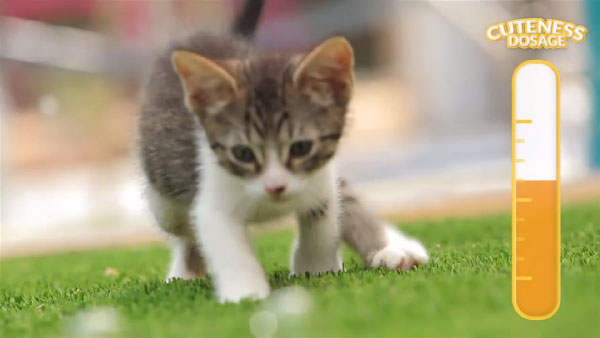 So what’s the solution for broke, anxiety-ridden misanthropes like myself? A good one seems to be cats. Or, more precisely, kittens.

The video below, sponsored by Purina’s Tidy Cat, makes a good case for the beneficial effects of a kitten break in the middle of the day. The media company Soul Pancake set up a big, lucite cube in a public area in Los Angles and invited people to come in for a quick, meditative break. When inside, the people put on yellow, branded headphones, and listen to a voice putting them through a guided meditation.

“Listen to the gentle purring of the happy kitten,” the voice intones. “Purrr. Purrr. Purrr. Now. Open your eyes.”

And that’s when the little trap doors open up and the real cats come out.

As other people have pointed out, it’s pretty obvious that the appearance of the cats isn’t quite as spontaneous as the video makes it seem. Kittens are relaxing only to those humans who aren’t allergic to them. For those who are, being swarmed by a bunch of kittens will make the rest of your day even more stressful than it already was. So obviously, there had to be some discussion about that beforehand. That doesn’t make it any less cute, though.

Tidy Cats has also put up this shorter video for Virtual Kitten Therapy, so you can just try it at home instead of waiting for someone to build a plexiglass cube in your neighborhood and fill it with kittens. That’s a plan that I’d support, actually, but until then, having YouTube is a good way to get your needed cuteness break.

Posted in Vid We Love, In The News,