Next on The Scoop: Happy New Year from Skeezix and The Cat’s Meow! 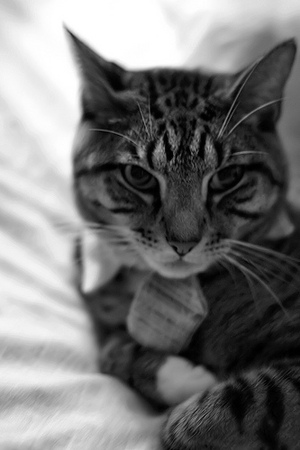 Change.org‘s list of the top 10 legal triumphs for animals in 2010 includes several that will protect cats.

The most important of these is a federal law that bans “crush videos” that feature people torturing and killing small animals by stepping on them or sitting on them.

In 2010, animal protection groups and lawmakers banded together to fight the U.S. Supreme Court’s decision to overturn a ban on these gruesome videos, and a new, improved law was quickly passed and enacted.

The Animal Crush Video Prohibition Act of 2010 criminalizes the creation, sale, distribution, advertising, marketing and exchange of animal crush videos. The bill, introduced by Oregon Senator Jeff Merkley with Senators Jon Kyl (R-AZ) and Richard Burr (R-NC), won unanimous support in the Senate. The penalty for violations of the measure is up to seven years in prison.

In 2010, the Animal Legal Defense Fund began a campaign to create registries of people convicted of animal cruelty acts, and city and state officials have begun to take action. In October 2010, Suffolk County, N.Y.,created the first animal abuser registry in the United States, and many more communities may be on the way to creating these registries in the upcoming years.

Another victory for animals is theelimination or the gas chamber as a method of destroying homeless cats in the town of Garland, Texas. Although gas chambers are illegal in several states, many U.S. shelters still use this inhumane method of killing cats and dogs. But after a year of protests by area activists and more than 2,000 e-mails from Change.org members, Garland’s gas chamber was finally dismantled and the shelter committed to use only humane methods to put down animals.

Change.org attributes the success of its campaigns to its members and their willingness to speak out and take action for dogs, cats and other animals.