Next on The Scoop: 21 Incredible Cat Pumpkin Carvings
In the News

A Cat Fight Rocks the Highest Levels of British Government

A feud erupts at 10 Downing St. between feline reps of the prime minister and the chancellor of the exchequer.

A storm is brewing behind the wrought iron fences that surround British government headquarters at 10 Downing St. in London. But it’s not the prime minister and his chief finance official duking it out over policy issues — it’s their feline proxies. 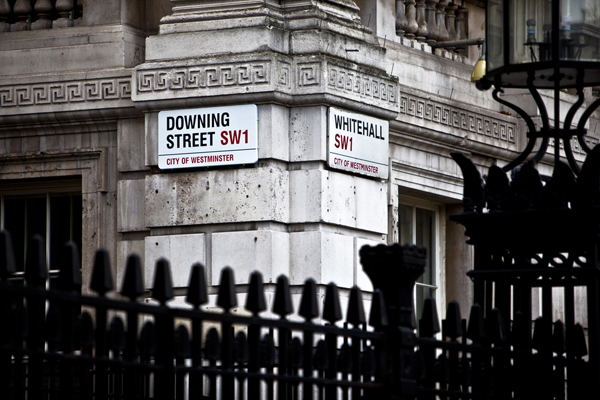 On Oct. 16, Larry, the official cat of 10 Downing St., got into a dustup with Freya, who occupies the next-door residence of the chancellor of the exchequer, a position similar to the U.S. secretary of the treasury. A member of the Political Pictures news agency was there to snap a photo of the scene ÔÇô- and break up the fight — and soon posted the picture on the organization’s Twitter feed. 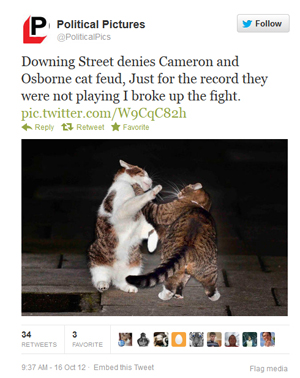 A spokesman for the prime minister tried to pass off the scuffle as mere play, but several witnesses say it was quite a serious matter. They also say Freya was the clear winner of the bout; when Larry took a claw to the neck, he quickly retreated to the safety of his home (and presumably Freya sat down in the middle of the street and groomed herself as though nothing had happened).

The news media have been merciless with poor Larry. Ever since he arrived at 10 Downing in early 2011, the tabloid press has been hounding him mercilessly, accusing him of being a poor mouser and leeching off the taxpayers’ money because he was found asleep on the job once or twice. But not everything in Larry’s life was grim; about seven months after he moved into Downing Street, he found a lady friend, Maisy, with whom he spent many happy hours sleeping in sun puddles and sharing meals.

Who knows? Perhaps Freya’s fury has its origin in Larry’s fondness for Maisy.

Whatever the case, a spokeswoman for the prime minister insists that the cats are able to “coexist.”

Posted in In The News, Humor,