Next on The Scoop: I Care for a Colony of Feral Cats
Catster Heroes

The Italian woman turned over her North Carolina studio to 260 cats in 2007.

When Italian artist Siglinda Scarpa was a child, her dad brought home a kitten one night and placed him under the blankets with her in bed. She hugged the cold, wet kitty to her heart, and he purred. She’d always struggled to communicate with people, but she had no trouble communicating with him. This kitten became her first friend.

To honor the memory of her beloved friend, Scarpa has always filled her homes with as many felines as she could fit. She came to the United States in 1985 and continued dreaming of a safe haven for cats that were dispossessed or scheduled for euthanasia by public shelters.

“The refuge would be a place where even cats that were unadoptable could live in comfort, with the care, attention, and love they deserve," she says. 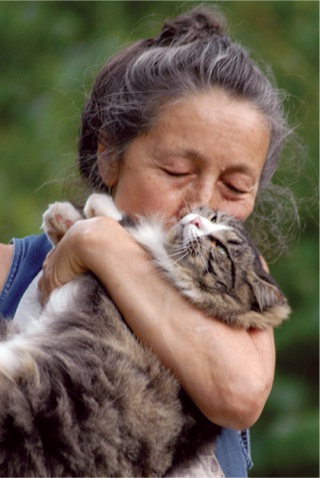 In 2007, then-67-year-old Scarpa fulfilled her lifelong dream when she opened the nonprofit Goathouse Refuge in Pittsboro, N.C. Located in a large building that used to serve as Scarpa’s studio “before the cats took over,” the refuge houses 260 cats, who are cared for by four part-time employees and 45 volunteers. Scarpa’s studio is now in a smaller building on the property. In addition to indoor areas, the Goathouse features an acre and a half of fenced-in wooded area, complete with shelters, hammocks, and cat trees. Several dogs, goats, and other animals, all rescued from shelters, also live on 16 acres of farmland.

"Our place is a very special place," Scarpa says. "The cats can climb trees, and they can play and lie in the sun. It’s an environment where the animals are really able to be themselves. They’re not in cages."

Most cats arrive at the Goathouse after being abandoned by their owners, which Scarpa says is a rampant problem in North Carolina due to unemployment and home foreclosures. She says there are 22 animal shelters in the state that use gas chambers because they are beyond max capacity with homeless cats, "and it’s absolutely atrocious. It’s heartbreaking." 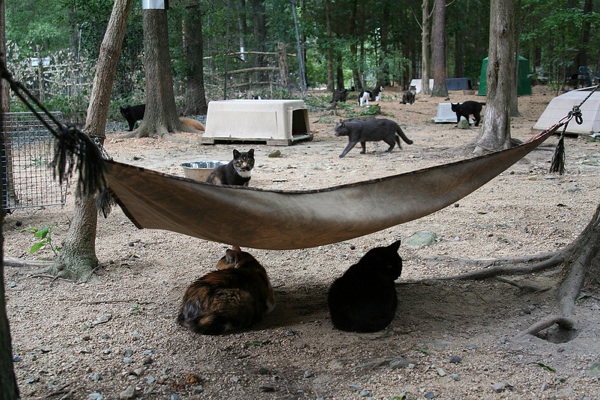 The Goathouse has saved many cats from death row. The majority of cats at the refuge are available for adoption, with the exception of some feral colonies, who will spend their lives there. According to Scarpa, the Goathouse has an excellent adoption rate. So far this year, 160 cats have found forever homes.

"Generally, it’s the cat who chooses the person," she says. "The people will sit on the benches in the woods, and the cats gather around, and generally there is one cat who particularly likes that person, and that’s the way it goes." 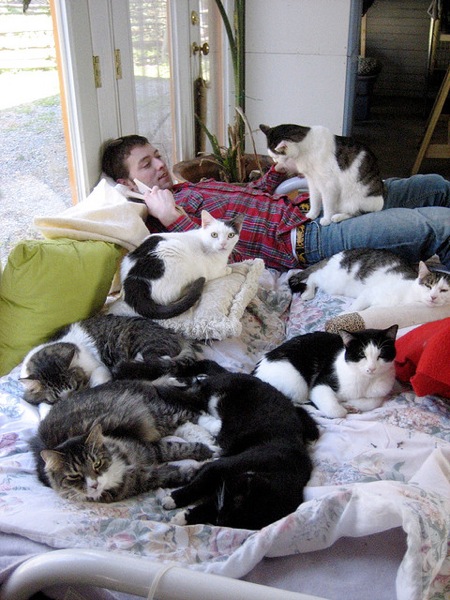 For Scarpa, one of the most amazing parts about working with cats is knowing that their relationships are as strong and significant as human relationships. For example, two inseparable brothers she rescued after Hurricane Katrina were split up when one of them went missing in the woods, and despite weeks of searching, Goathouse volunteers never found him. He has been gone for more than two years, but his brother still wanders the grounds at night, searching and calling for him. 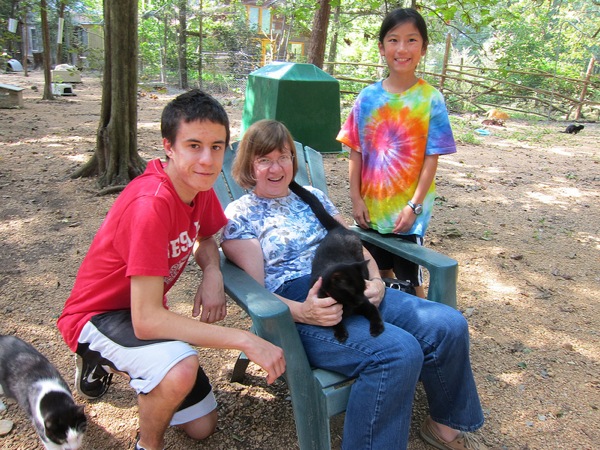 Scarpa also adored a bonded pair of cats who slept in each other’s arms — "they were very close friends," Scarpa says. Unfortunately one of them became ill and went into renal failure. He was dying — it was just a matter of when. 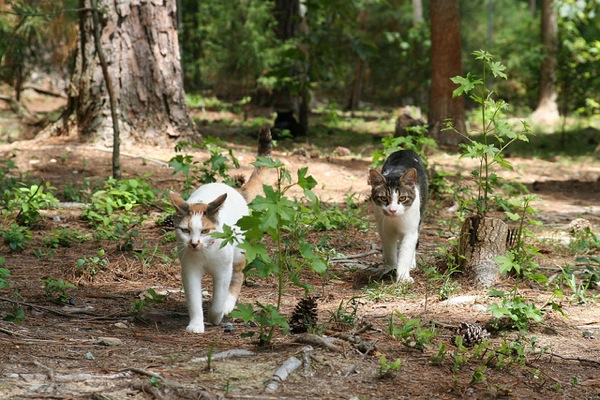 Scarpa herself bonded with a kitten who arrived at the Goathouse after being thrown from the window of a moving car on the highway. "Somebody saw it happen, and she went back and found him and brought him to me," she says.

The kitten developed breathing problems due to a tumor between his palate and his brain, but he was too young for surgery. To prevent him from choking, Scarpa trained him to sleep on her pillow each night, and each time he started choking, she would wake him. This went on for nine months until he could have the tumor removed. Now he is growing up and doing well.

And Scarpa says these are just a few of the powerful bonds and memorable relationships she has witnessed and shared with "many, many, many, many cats" over the years.

"The relationship among animals — people don’t really pay too much attention to it, but they love each other, and they suffer when they lose each other," she says. "It’s very important." 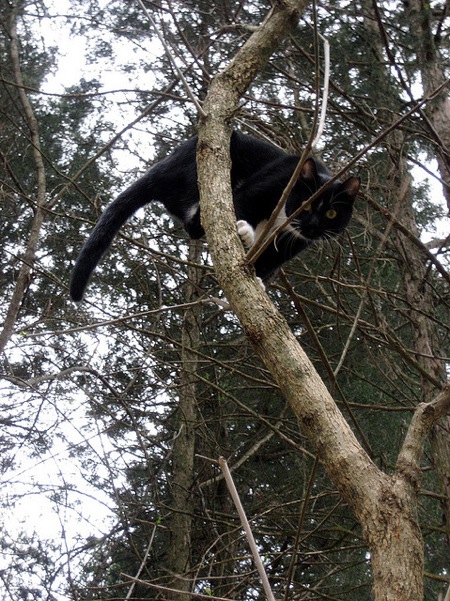 Scarpa’s feline friends have also influenced her sculptures and pottery, which have been described as "things that do not exist ÔÇô- but they could." She creates stunning teapots, pitchers, and tiles that frequently incorporate animal shapes and are as beautiful and ethereal as they are functional.

"I think there is a kind of awareness and a way of feeling things around me that I learned from the cats," Scarpa says. "The cats are very perceptive and very aware of their environment, so I became always very aware of my environment. And I think the things I make are because of that."

In addition to her artwork and her cats, Scarpa’s other love is cooking. She uses her culinary skills to raise funds for the kitties at the Goathouse by hosting a 10-course, gourmet Italian dinner in her garden each June. She also occasionally throws authentic Italian pizza parties. "I’m out there rolling 400 pizzas," she says. "I make it the way we make it in Italy."

To raise even more funds and awareness, this fall the Goathouse is planning an art auction in the garden, and next February it will have the first Carnevale Veneziano, a traditional Italian celebration, which will incorporate two parades and feature masks and costumes made by students at North Carolina State University and Cinzia Fiaschi, a well-known Italian artist.

Even better: "All of the costumes are inspired by the cats," Scarpa says. "We have some wonderful, wonderful kitties here."