Next on The Scoop: 6 Awesome Cat Apps: From the Helpful to the Ridiculous

Help Us Give These 6 Litters of Kittens Hysterical Group Names!

What could ever be better than a kitten? Consider this: An entire litter of cutie-pie, dewy-eyed, fluffball kittens you give group names! Thankfully, with Catster having access to a near infinite vault of kitten pictures, we were able to spend a rainy afternoon indulging in a kitten-naming fiesta.

To help with this esteemed discipline, I got in touch with Sarah Donner, a self-described “indie folk-pop star who has embraced the cat lady inside her.” When not traversing the tour circuit, Sarah enjoys fostering litters of kittens and (yup!) giving them themed names. (I am reliably informed she currently has a batch named after items on a Chinese food menu.) Consider her something of a litter naming expert.

Read on for our suggestions for these variable-numbered kitten litters — and then chip in with your own suggestions down in the perky ol’ comments section.

1. A litter of 8 mischievous kittens

Hip-hop’s original oversized troupe the Wu-Tang Clan are an ensemble kitten litter waiting to happen. I’d preface each of their kung-fu-inspired monikers with “Lil'” to turn names like Ghostface Killah and the RZA from the menacing to the adorbs. And pour out a little milk for Lil’ Ol’ Dirty, the ninth Wu-Tang kitten who sadly did not survive long enough to be part of the photoshoot.

Sarah’s take on these eight furballs in flowerpots headed in a more sanitary direction as she plumped for a bathroom theme. Say hello to little Loofa, Cottonball, Scrub, Plunger, Floss, Clipper, Tweeze, and Q-Tip. (In a moment of unintended synergy, the latter name has also been used by a rap artist.)

2. A litter of 5 variable-height kittens 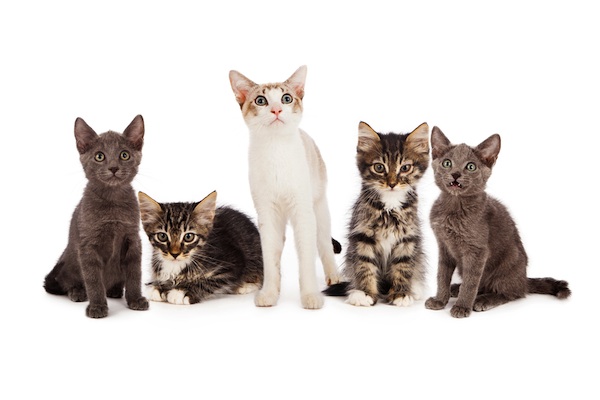 The abnormally tall kitten standing proud in the middle seals this one for me — it’s got to be the USA’s fabled Dream Team basketball boys from the 1992 Olympics. The beanpole in the middle in this case is Patrick Ewing, with dinky John Stockton squatting to his right.

Sarah was on board with the bouncing ball sentiment but ditched the real-life names and went with (from left to right) Dunk, Nugget, H-O-R-S-E, Dribble, and Knick. Sports!

Technically, there are but three reality-TV-birthed Kardashians — Kim, Khloe, and Kourtney — but they’ve already begun breeding, and this ornate sofa seems to tap into their high-maintenance lifestyle. So I’m going with the Kardashian kittens for this one — a kitty clan that’s definitely more cashmere than cardboard.

In Sarah’s eyes, though, these 10 white cuties seem to exude an altogether more utilitarian appeal so she went with a hardware vibe. Moniker highlights include Nut, Bolt, Wingnut, Turnbuckle, and Hoseclamp!

4. A litter of 6 puffy kittens

Small, squat, and exceedingly puffy — yep, let’s call these six after the Ewoks, those miniature bear-like beasts from the Return of the Jedi flick. Sarah anointed them (again from left to right) as Treek, Wicket, Tarfang, Chief Chirpa, Endor, and Logray. I Googled around to muster up this alliterated lot: Wicket, Widdle, Winda, Warrick, Weechee, and Warok.

5. A ginger-flecked litter of 5 kittens

See that cheeky-faced, ginger-topped scamp in the middle who already seems to have eyes gazing out at solo pastures? That’s little Justin Timberlake back when he was part of the boy band ‘N Sync. Give them a stage (or a wooden box) and Justin, JC, Lance, Chris, and Joey will most certainly dance for you!

As an alternative theme, Sarah decided to name this kitten quintet after hobbits. So that’s Baggins, Took, Samwise, Frodo, and Pippin. 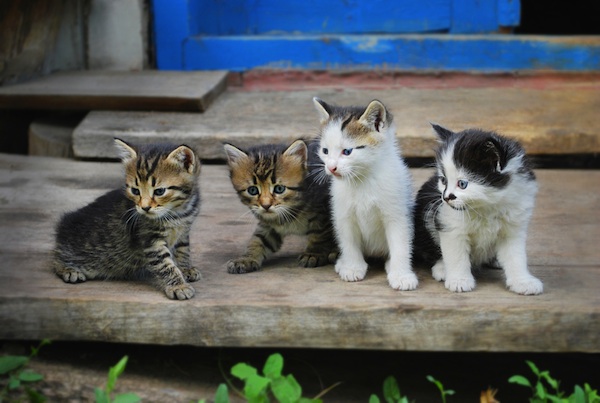 Inspired by their posturing on the stairs, I’d call this stately quartet after the top end of President Obama’s White House unit. With their boundless energy, Barack, Joe, John, and Susan just don’t stop campaigning!

So, that’s our take on giving entire litters themed names — now weigh in with your own ideas in the comments below!