Next on The Scoop: Black Friday? No, It’s Cat Friday, an ASPCA Adoption Event

Last night, a ginormous ginger tabby kitten from outer space turned up at the American Music Awards show alongside serial tongue-waggler and burgeoning twerkster Miley Cyrus. In tandem, the impromptu duo performed a rendition of Miley’s hit song “Wrecking Ball,” with the giant feline lip-syncing along to the lyrics with quite marvelous aplomb.

If the video footage has not already conquered your social media timeline, you can watch it now.

Plunging herself head-first into the cat-crazed spirit of the occasion, Miley sported a skimpy cat-emblazoned French-cut bikini and a wrist accoutrement that almost resembled a fancy portable cat water fountain.

At one point, the emotion of the grand occasion got the better of both performers and they simultaneously broke down and blubbed tears of pure passion together. Here is a picture of those momentous waterworks. 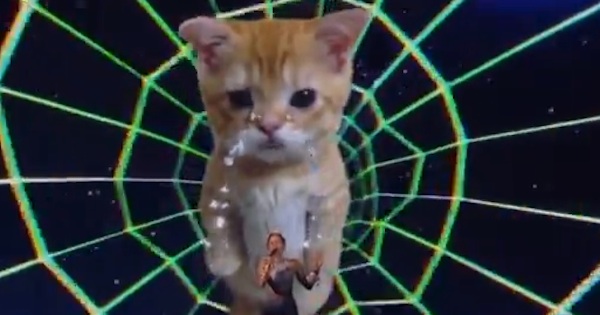 In other highlights, Miley appeared to flirt with the giant space kitten by wiggling her nether regions in its direction. To this, the kitten acted like a model professional and proved entirely unfazed by the salacious advance.

Despite being a reported dog owner, Miley’s reputation among the world of cats is a strong and respected one. Many social media-savvy domestic cats enjoy taking pictures of themselves mimicking Miley’s propensity to stick out her elongated tongue. (Catster has previously reported on the widespread phenomenon.) ‘With a coy nod to Miley’s cult status in the feline realm, the giant space tabby ended its performance by proudly sticking out its galactic tongue. Behold! 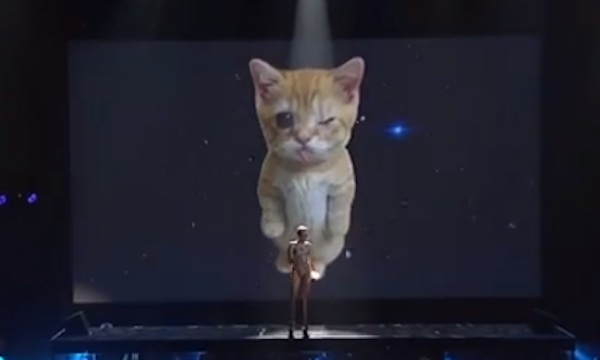 Posted in In The News, Offbeat, Celebrities,