Next on The Scoop: Cute Alert: Watch This Livestream of a Mom Cat Nursing Her Kittens
Haiku by Cat

Poetry-writing cats seek universal meaning from within the confines of cardboard walls.

Cats are drawn to boxes, pulled by a force as strong as Earth’s gravity. It’s a law of nature, a basic tenet of physics.

The phenomena is so puzzling that scientists are still trying to figure out what it is about boxes that appeals to felines large and small. A recent study published in the journal Applied Animal Behavior Science seemed to indicate that boxes provide a sense of security, a place for cats to hide. Of course, that would make sense if the cat was actually hidden. Like Dawn. 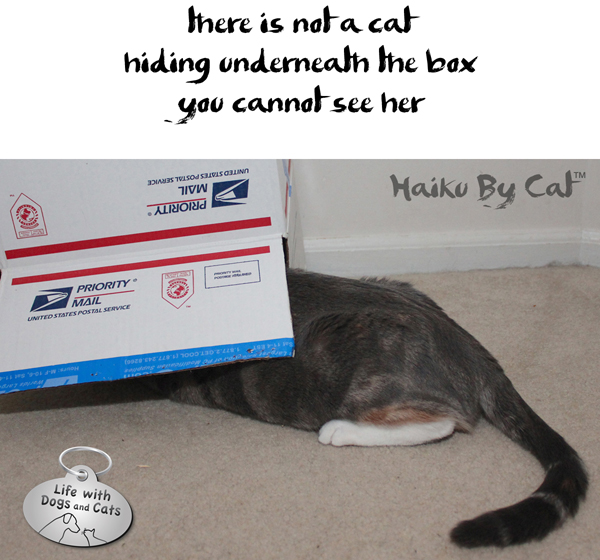 All Haiku by Cat and photography by Susan C. Willett

There’s also the matter of size. Which, apparently, does not matter. A cat is in a box, even if not all of the cat is actually contained within. In other words, every box is a perfect fit. At least, that’s what Elsa Clair says. 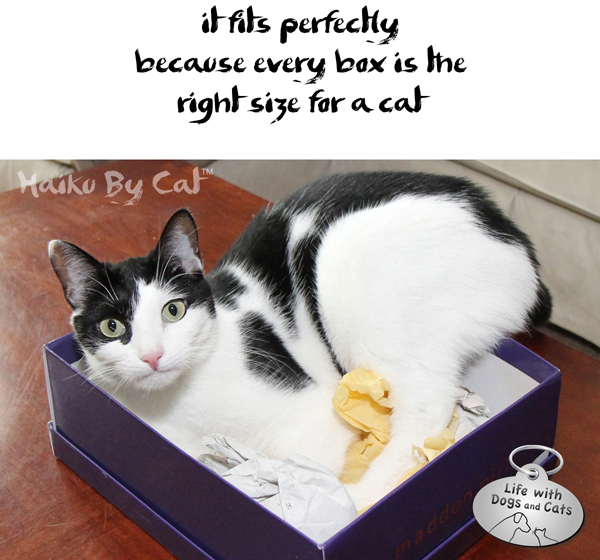 Of course, one might want to look at it philosophically, to understand what is the essence of boxness. What makes a box, a box? Athena offers her opinion. 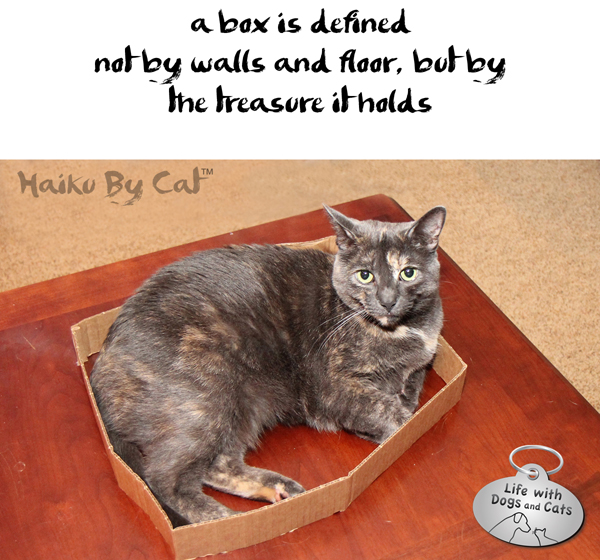 Cats. Boxes. Discuss in the comments. Or better yet, write a haiku!

About the author: Susan C. Willett is a writer, photographer, and blogger whose award-winning original stories, photography, poetry, and humor can be found at Life With Dogs and Cats. She lives in New Jersey with three dogs and four cats (all rescues) and at least a couple of humans — all of whom provide inspiration for her work. Refusing to take sides in the interweb’s dogs vs. cats debate, Susan enjoys observing the interspecies interaction among the varied inhabitants of her home — like living in a reality TV show, only furrier. In addition to Life With Dogs and Cats, you can find more Lilah, Jasper, and Tucker (and the rest of the gang) on Haiku by Dog™, Haiku by Cat™, and Dogs and Cats Texting.

Posted in Haiku By Cat, Humor, Cats And Art, Cats And Culture,