Next on The Scoop: Contest: Win 50 Zealies in the Derby Day Stroll on Catster 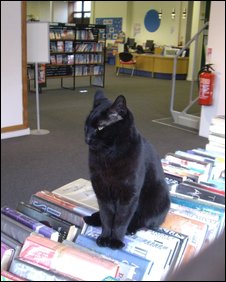 Across the pond in Kent, in the seaside community of Deal, Fidel the literary cat (pictured at right) makes daily visits to the Deal library while his owners are at work.

The eight-year-old black cat turns up at Deal library almost every day. He spends the day on his favorite blue chair, leaving only when he sees his owners arriving home.

Members of the library’s staff say they have never tried to encourage Fidel with food and even used to put him outside when he first began to visit them, but he always came back.

Heather Hilton, district manager for Deal Library, said: “Fidel certainly seems to like coming here and he’s very popular with our customers. I think he’s a bit of an art critic, too, because we sometimes see him examining the pictures on the gallery wall,” she added.

A spokeswoman for Kent County Council which runs the library said Fidel was such a “dedicated customer” that he sometimes arrived before the staff, waiting for them at the front door.

Fidel is a rescue cat. His owners adopted him from a local sanctuary after he was found abandoned in a flat in Deal.