Next on The Scoop: What Causes Scabby Necks in Cats? 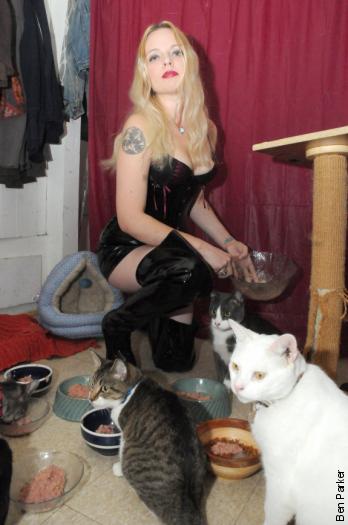 After a long day as a professional disciplinarian who charges up to $180/hr, Haley comes home to a two-bedroom Bushwick apartment dominated by as many as 30 lovingly cared-for cats. Sandra DeFeo, co-executive director of the Humane Society of New York, was quoted as saying “That’s a lot of cats for a two-bedroom, and I wouldn’t encourage anyone to do it. But no animal is happy in the streets, [and] obviously, she works very hard to take care of them.”

In the last year, Haley has rescued, nursed and put up for adoption about 90 cats. She works with the ASPCA in Brooklyn, and Kittykind*, a nonprofit cat-rescue group in Union Square.

I can’t quote the original article here because the puns and double entendres veer into adult-content territory and you don’t want to be caught checking out the photos at work, but if you wanna check back later click the link.