Next on The Scoop: How Did You Know You Were Ready to Adopt Another Cat?

Kitty curmudgeons lost their dearest leader back in late-January of this year when Colonel Meow passed away. Now it turns out the scowl-faced dictator’s Slave Beast is going to take part in an online hangout to answer pressing questions about the Colonel’s passing.

The hangout will go down at 3:30 p.m. PST (or 6.30 p.m. for plucky East Coast dwellers) and you can take part by going to anmlst.co/ColonelMeowHangout.

The Colonel’s Slave Beast has promoted the hangout with the hashtags “We’re doing okay” and “Let’s chat,” so presumably she’s open to all questions and queries from the Colonel’s shell-shocked minions.

Many remaining followers of the cult of the Colonel are wondering whether this is an opportunity to announce a foundation for rescuing cats under his name. I would like to envision such a thing consisting of a communal kitty playroom with a gigantic oil painting of the Colonel looking over his young charges.

Other fans of the Colonel will probably want to press his Slave Beast for more information about his passing, which at that moment is shrouded in some sort of a mystery with rumors suggesting complications from a kidney failure were behind his ultimate demise. 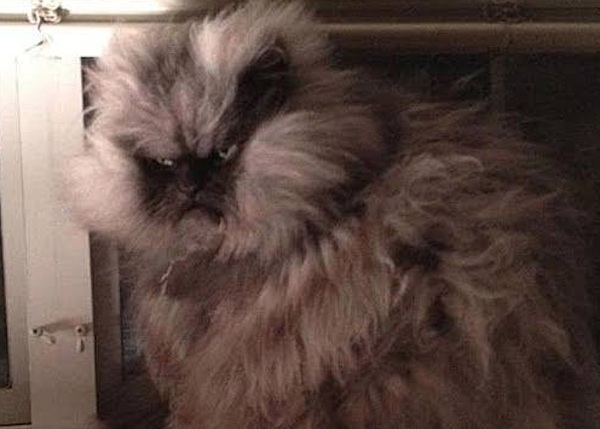 Personally, I think it’s an apt moment to announce a museum based around the Colonel’s remaining artifacts, including his famed Scotch glass. Of course, in the true spirit of the long-haired tyrant, there would be none of that “suggested donation” nonsense and a very strict formal dress code would be enforced. It’s just how the Colonel would have wanted it.

Read more on the Colonel’s passing:

Posted in In the News, Celebrity Cats, Cats Own the Internet,