Next on The Scoop: My Family’s 10 Favorite Cartoon Cats from Television
Vid We Love

Vids We Love: NYC’s Bodega Cats In Their Own Words

In short video documentaries, WNYC lets cats tell tales of frolicking in the aisles, hopping around beer crates, and hating on strollers.

Last year, I claimed that bodega cats are “the urban world’s most magnificent beast.” This is without doubt the truest claim ever published on Catster — and the folks over at WNYC, New York City’s NPR outpost, clearly agree, as earlier this year they held an Instagram-enabled competition to find the city’s finest specimen.

Now they’ve revisited the competition’s most notable contestants and presented each cat’s story in a short documentary format.

First up is Carmel, a two-month-old kitten who skitters around the aisles of a beer-stocked deli in the historically Polish neighborhood of Ridgewood. (She quips that she can feast on all the food in the store except the brews.)

Next, the series heads over to Park Slope in Brooklyn, where the uninspiringly named Sheeba and Victoria suffer a life that plays out like a real life version of Portlandia on steroids and Xanax. (Spoiler: The hardship of entitlement ensues.)

Finally, the best in the first batch of the series is set on the Upper West Side and stars Oliver, so named because he was an orphan found living in a nearby schoolyard.

Oliver loves nothing more than to nestle in among the produce outside his bodega, where he lounges and spies on passing customers. That is, until his owner sprays him with water to keep him out of the merchandise. Oliver also claims to have a healthy disdain for oversized strollers — which presumably means he’s not planning a day trip to Sheeba and Victoria’s deli anytime soon. 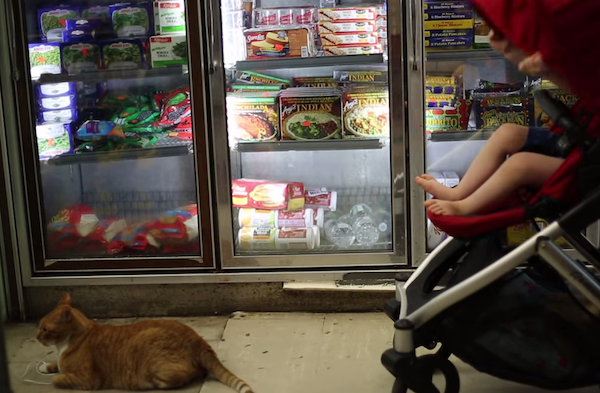 More bodega cat videos are promised — although the series is also a fine excuse to revisit perhaps the greatest bodega cat mockumentary of all:

Posted in Vid We Love, Cats Own The Internet,