Next on The Scoop: 5 Tips for Keeping Your Cats Safe Over the Holidays
Catster Tips

We dog-sat for a friend over the holidays; here's what we did to make sure everyone got along.

Our dog passed away a few months ago, and we’ve kind of missed having a dog around the house, though we’re not in a hurry to adopt. So when a friend asked us if we would dog sit her very nice German Shepherd female over the Thanksgiving weekend, we jumped at the chance.

We agreed to take the dog (Ruby) into our house, which we knew would be easier for all involved. We knew that Ruby got along very well with the two cats in her own household — in fact, she loves them. She often cuddles with one cat named Norma Jean.

The big question mark in all of this was how my cats would react. Yes, there had been dogs in the house, but not for many years. Our cats were aware of our dog Corona’s presence, but we generally did not bring them together — we were unsure of whether he could be trusted with cats. 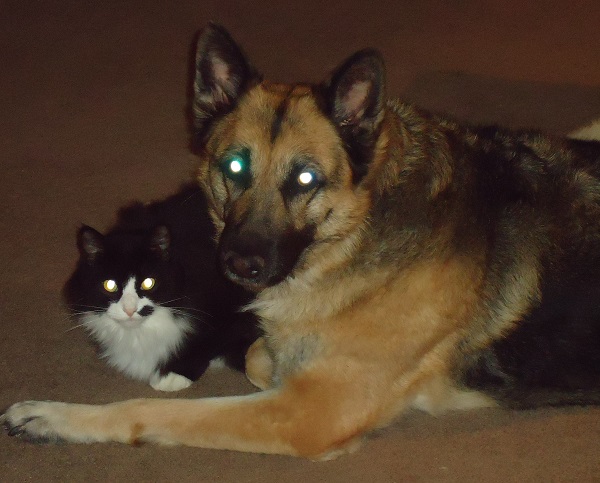 Here’s what we did to see if everybody would get along:

1. We had a short trial visit

Ruby came over with her mom a few days before the departure date and stayed for about 30 minutes. After letting Ruby run around outside for a few moments, we brought her into the house on her leash. There were plenty of places, rooms, and floors for the cats to escape to if they didn’t want to see Ruby.

The dynamics were really interesting to watch. Ruby was very respectful, even scared (or wary) of the cats. My two boys who often act full of themselves (Zorro and Norton) were nowhere to be found. And two of the quietest and gentlest of the bunch (Kieran and Chester) stood their ground. Kieran sat calmly on a chair in the living room, observing the dog. My mild-mannered Chester gave Ruby a steady evil eye. In fact, Chester started to slowly get closer to the dog. He didn’t growl or make a noise, but simply continued to stare at the dog.

Poor Ruby hid behind a nearby rocking chair. 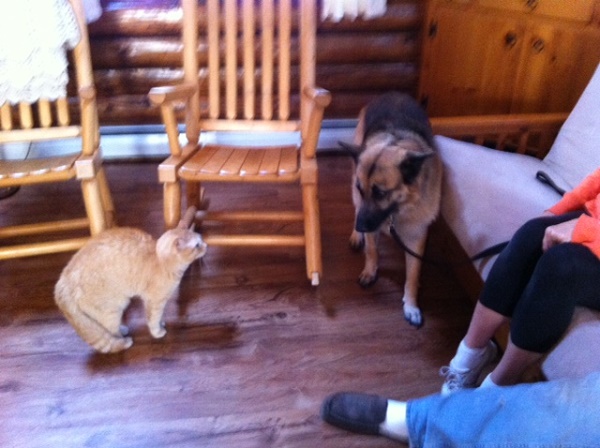 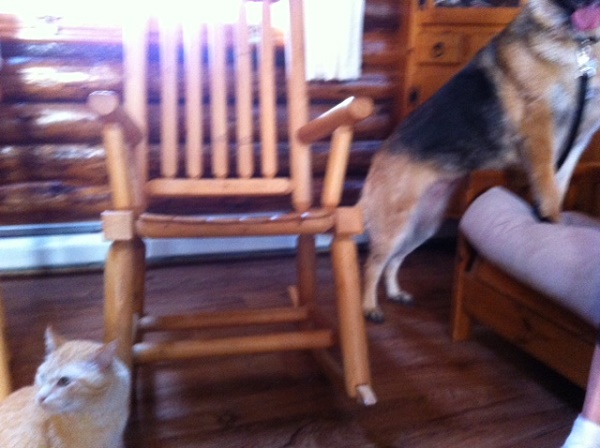 Then, Ruby was so determined to avoid getting in the path of the cats that she climbed up on the futon behind her mom.

Obviously, we didn’t want any situation to escalate, so we picked up Chester and prevented him from getting any closer. Ruby didn’t make a noise.

Ruby’s mom took the dog home and told me that Ruby immediately went and cuddled with Norma Jean.

2. We played it by ear for the actual visit

Because we still really weren’t sure how it would go, we started by putting Ruby in my office, with the door closed. I was in there much of the time, so she wouldn’t be alone. Ruby proved over and over again what a sweet dog she is. She is slightly nervous but not in an annoying way. She loved the attention.

As we got more comfortable with the situation, we’d bring her on leash into the rest of the house and sit with her and watch stuff transpire. The cats were a little miffed but not seriously upset. I think they immediately determined that she was not a threat. 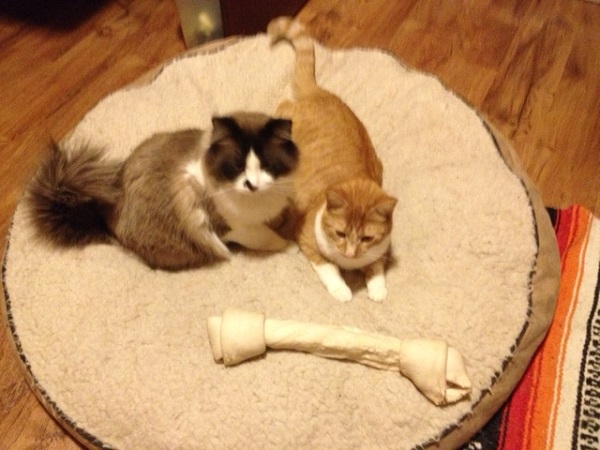 Ruby had never been in a crate, so crating was not an option. I tried to get her to go in to Corona’s old crate, but she was not interested. I didn’t want to add stress or another variable to the situation so I did not try and train her to go in.

3. Gradually we let things be looser

When I felt comfortable, I began opening the door to the office. We also started letting her have a supervised run of the house. As I said, the cats had plenty of places to escape if they needed to. But as the few days passed, they grew more comfortable with her presence. I think she would have loved to cuddle with them, but they were not interested. 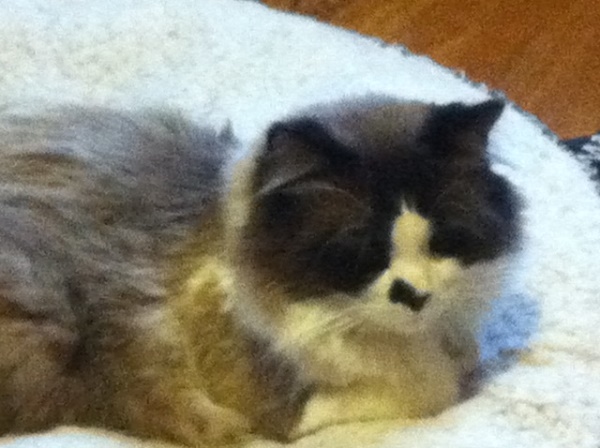 4. We always kept her in the office, with the door closed, at night

Ruby may not have been crazy about this, but I did not want everybody moving about and mingling when the humans were asleep. Generally she seemed to tolerate this well. It had occurred to me at one point to use Rescue Remedy for pets, if anyone seemed unduly stressed out by the situation. But I never remembered, and it turned out it was not needed.

5. I took Ruby for lots of walks to give everyone a break

This was great, because I have missed having a dog to walk with. It gave the cats a break, and it gave Ruby needed exercise and stress relief.

Remember that Ruby is an exceptional dog, particularly around cats. Obviously this would be handled much differently if the dog was more hostile or could not be trusted around cats. But what we did might provide a framework for you, if you find yourself in a situation like this.

Have you had to introduce a dog or dog sit for a few days? What tips can you offer and how did it go for you? let us know in the comments!

Photo of Ruby and Norma Jean courtesy of J. S.